“The wise, engaged in devotional service, take refuge in the Lord, and free themselves from the cycle of birth and death by renouncing the fruits of action in the material world. In this way they can attain that state beyond all miseries.” (Lord Krishna, Bhagavad-gita, 2.51)

Strength comes from fearlessness. It is the nature of human beings to be fearful. At their core, animals involve themselves in four activities: eating, sleeping, mating, and defending. The defensive mentality arises out of fear. Animals want to protect what they have, so they are fearful of others attacking them. At the time of birth, human beings are no different than the animals. It is only through the cultivation of knowledge that a person can rise to an advanced stage of consciousness. Man’s ability to know and understand God represents the uniqueness of the human form of life. This knowledge of God is the remover of all fears.

We need strength to be successful at pretty much any material endeavor. Athletes are a great example of this. In men’s professional tennis during the mid 1980s, Americans John McEnroe and Jimmy Connors were on top of the game. Ivan Lendl was right behind them, but he had trouble beating McEnroe and Connors in the big matches. What did Lendl do? He worked on his fitness, increasing his stamina through a rigorous training regimen. As a result, Lendl ascended to the top of the rankings. For the rest of his career, Lendl would dominate both McEnroe and Connors and many other players as well. The same dedication to fitness would be followed by future generations of players including Andre Agassi, Jim Courier, and now Roger Federer. Endurance means strength. Knowing that you can withstand a long and grueling match provides a mental edge over an opponent. Current tennis star Rafael Nadal wins matches through grit and tenacity, physically wearing down his opponent. Nadal seems to have an unlimited supply of energy, which gives him an edge both physically and mentally. Strength plays an important role for athletes in other sports as well. The recent steroid scandal in Major League Baseball centered around the desire for increased strength for batters. With larger muscles, hitters could increase their bat speed, which would in turn lead to more home runs.

“O son of Kunti, the nonpermanent appearance of happiness and distress, and their disappearance in due course, are like the appearance and disappearance of winter and summer seasons. They arise from sense perception, O scion of Bharata, and one must learn to tolerate them without being disturbed.” (Lord Krishna, Bhagavad-gita, 2.14)

Even though one may have great physical and mental strength, fear is still there to some degree. Whatever level of success we achieve in material life, there is always the great equalizer waiting at the end; death. At the time of death, all our material possessions must be given up. We have no choice in this matter. Death means the changing of bodies, so our current body is discarded along with all our possessions.

“As a person puts on new garments, giving up old ones, similarly, the soul accepts new material bodies, giving up the old and useless ones.” (Lord Krishna, Bg. 2.22)

We are given a new body upon our next birth, meaning we have to start the learning and strength acquiring processes all over again. No amount of physical training or mental speculation can permanently remove this fear of death.

This fear can only be removed by becoming God conscious, which means connecting with God at all times. Just as a blanket provides warmth and security through the cold night, the Lord can give us unflinching protection throughout our time in this material world. God is one, but He has many names that describe His innumerable qualities. He is Ajita, unconquerable, and Rama, one who gives pleasure. By humbly serving God, we can connect directly with His features, meaning He will make sure that we are always happy and never conquered by demons. This human form of life is meant for understanding God. It has no other purpose. If God wanted us to waste time on mundane sense gratification, He would let us remain in the body of an animal, where we could spend the whole day engaging our senses without worrying.

Human life is meant for developing spiritual strength. Having acquired this strength, a person can never be defeated. In this context, defeat refers to failure in spiritual life. When we engage in material endeavors, we are bound to win sometimes and lose at other times. This is all due to our karma and the karma of others. Spiritual life is different. If we are sincere in our service to God, He will guarantee our victory in all endeavors. Lord Hanuman is a great example in this regard. Though a monkey by birth, Hanuman had tremendous powers of which he was even unaware. He could change his shape at will; he could assume an infinitely large body or become minute in stature. He could fly through the sky simply by leaping off the ground. Hanuman possessed these traits without having to work for them.

Hanuman acquired all these powers automatically since he would need them in his service to God. In the Treta Yuga, Lord Krishna, the Supreme Personality of Godhead, incarnated on earth as Lord Rama, a pious kshatriya prince. Lord Rama’s wife, Sita Devi, was kidnapped in the forest by the Rakshasa demon Ravana. Rama and His brother Lakshmana enlisted the help of the Vanaras, human-like monkeys, living in the Kishkindha forest. Sugriva was the king of the Vanaras, and Hanuman was their chief warrior. All the monkeys were sent to scour the earth looking for Sita, but it was Hanuman who was able to cross the ocean to the island of Lanka, where Ravana’s kingdom was. He was able to find Sita, set fire to Lanka, and then later return with Rama and the rest of the monkeys to battle against Ravana and the other Rakshasas.

Hanuman had great physical strength, but he also needed great perseverance in going to Lanka. Many demons tried to stop his path, but he was able to thwart them. While in Lanka, he initially roamed through the city incognito, looking for Sita in Ravana’s various palaces. Hanuman was so taken aback by the beauty and grand nature of Ravana’s kingdom, that he began to lament. He thought to himself, “There is no way that I’ll be able to find Sita. Even if I do, how will everyone be able to come here and fight against these Rakshasas? I have failed miserably. I must give up my life.” These thoughts are quite natural. We all get overwhelmed every now and then. But what Hanuman did next was important. He chose to continue fighting instead of giving up. The thing that kept him going was his love for Rama, Lakshmana, Sita, and Sugriva. Hanuman was a pure devotee at heart, so he had no attachment to his great strength. He made the most of what God gave him by utilizing his powers for God’s benefit. This is the lesson for all of us to follow. We are all born under different circumstances, each having their advantages and disadvantages, but regardless, we should use whatever is at our disposal to sincerely serve the Lord.

In the end, it was Hanuman’s great faith and belief in Rama that enabled him to conquer his fear. He proved to be the greatest warrior, and his name is now synonymous with love and devotion to Rama. Hanuman was so famous even five thousand years ago, that Arjuna, Lord Krishna’s cousin and devotee, flew a flag bearing the emblem of Hanuman on his chariot during the famous Bharata War. 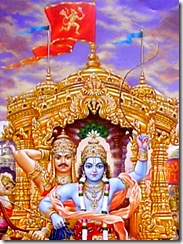 If we take up devotional service, we can become fearless. Sincerity is all that is required. Simply wanting to serve God without any personal motive means we have made our life successful. God will take care of the rest. He will give us whatever we need to serve Him.

For one to be considered a bona fide sannyasi, one in the renounced order of life, they must be completely fearless. A person who has taken complete shelter of the lotus feet of the Lord is a true sannyasi. Being completely confident in God’s protection, such a person will have the necessary confidence to overcome any obstacles.