“According to the instruction of Lord Krishna, Nanda Maharaja and the cowherd men called in learned brahmanas and began to worship Govardhana Hill by chanting Vedic hymns and offering prasadam. The inhabitants of Vrindavana assembled together, decorated their cows and gave them grass. Keeping the cows in front, they began to circumambulate Govardhana Hill.” (Krishna, The Supreme Personality of Godhead, Vol 1, Ch 24)

“Why should we listen to you? Who are you anyway? Where is your authority? We’ve been doing it our way for years. No one has had any problem with it. Now you come and tell us to change. You want us to worship a neighboring hill instead. You think that this will be better for us, but in what way? You are new to this town, while the traditions we follow predate us. They have done good for our community for so long, so I don’t see why we should listen to you. Who has advised you in this direction? Who is your guru?”

Such questions were not posed to the son of Nanda Maharaja several thousand years ago in the sacred town of Vrindavana. The father himself didn’t raise much opposition. He was a little perplexed, for the residents of the town were preparing for the annual Indra-yajna, a sacrifice that had rewarded them plenty through the years. The Supreme Personality of Godhead, Shri Krishna, was the one making the request. Yet Nanda and the others listened to Him not because of His divine nature. Of this they were unaware, but since He was such a darling, in the most beautiful boyhood body, and since He always wished everyone well in His innocence, they took the chance and followed Him. 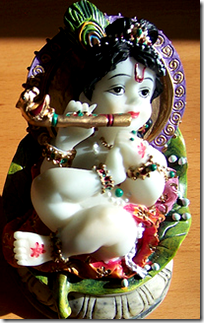 The child is a friend to all. They barely know the concept of enemies. They are innocent, after all. Even if someone is mean to them, the most they might do is avoid that person’s association. They won’t harbor hatred or ill-will for long. At that stage in maturity their minds are incapable of housing these negative emotions. The desire for constant play makes sure that there is no room for extended animosity.

Others know that the child is friendly towards everyone. That is why with the exception of the most cold-hearted and selfish, everyone will take delight in the activities, speech, and desires of the child. If an adult should break into your home and roam about, you will most certainly take notice. You might call the police. You might take out that weapon that is tucked away in your clothes drawer in your bedroom. You will certainly not ignore the issue.

But if the intruder is a child, there isn’t as much worry. If the child belongs to a neighbor, you might even take delight in their behavior. “Oh look, they have snuck into our home. I wonder what they want. Perhaps they want to play with our son. Perhaps they are looking for food, for they really enjoyed what we served yesterday. How wonderful it is that they have cleverly found a way to enter our home without us noticing.” 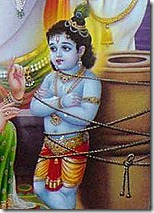 Such sentiments were regularly echoed in Vrindavana a long time ago. Vrindavana was a small farm community. Though it had tremendous wealth in the form of cows and their resulting milk products, the real treasure was the darling young child of mother Yashoda and her husband Nanda, who was the king of the community. This boy, who went by many endearing names, captivated the hearts and minds of the residents, who were all very pious. Their favorite name for Him was Krishna, which is a Sanskrit word that means all-attractive. He was also known as Shyamasundara, which means one who is very beautiful with a dark complexion, similar to that of a cloud that is about to pour down rain. He was known as Damodara as well, for one time His mother bound Him to a mortar by the belly as punishment for having broken a pot of butter.

Indeed, young Krishna loved butter. He was not picky as to the kind or the source. He didn’t want to purchase the butter, either. He would eat it at home straight out of the jar. He would also go to the homes of the neighbors and take it from their stocks. When the neighbors caught wind, they hid the pots up high in the pantry. Krishna would then conspire with His friends to break into these pantries and climb all the way up to reach the butter. Electricity was not required, as the jewels that mother Yashoda carefully decorated Krishna with supplied the lighting for the dark room.

Sometimes Krishna would get caught stealing and then be taken in front of mother Yashoda, who was to hand out swift punishment. But then amazingly the same people lodging the complaints would lobby for clemency, for they couldn’t stay angry with the darling child. Since Krishna was the pleasure of the town, He was also known as Gokulananda. He was the moon of the sacred city, so He was also known as Vrindavanachandra.

Since He was so dear to everyone, when one year He asked for the annual Indra-yajna to be skipped in favor of worship of Govardhana Hill, the people listened. A yajna is a sacrifice, and not surprisingly a sacrifice is supposed to yield good things. Indra is the heavenly personality in charge of the rain, so when he is pleased with a sacrifice in his honor, he makes sure there is sufficient rain in the area. There is no other way to guarantee sufficient rainfall. Artificial methods can be employed to import water from other areas, but even then the nature is supplying the water.

If an adult had made the same request, the people might not have listened. After all, messing with the rainfall was risky business. Without rain there would be no crops or vegetation. How would the people survive? They knew that Krishna wished them well. He was a friend to all. There was something magical about Him too, which the people noticed. Therefore they listened to Him. They were mesmerized by His childhood innocence, and from their devotion they were protected from even a vengeful Indra, who was indeed upset that the sacrifice in his honor was skipped. 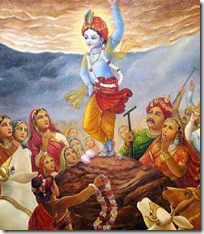 On the occasion of Govardhana Puja we remember that friend to all, the darling of Vrindavana. Though He is the original and most powerful person, and thus much more potent than any other individual in a childhood body, that wonderful form He exhibits in Vrindavana is His original one. It shows that He is indeed a friend to the world and that from following Him all good things come.

Is thief who enters the house.

When entrant a child of curiosity,

In dwellers absent is animosity.

Entire community His advice then obeyed.

Though of Indra’s wrath to be afraid,

Protected by God as child they stayed.