“Describing how material nature works, the Brahma-samhita says that the sun moves as desired by the Supreme Personality of Godhead. Consequently, for Lord Ramachandra to construct a bridge over the Indian Ocean with the help of monkey soldiers who threw great mountain peaks into the water is not at all wonderful; it is wonderful only in the sense that it has kept the name and fame of Lord Ramachandra eternally celebrated.” (Shrila Prabhupada, Shrimad Bhagavatam, 9.10.16 Purport)

How do you define the indefinable? That which is the source of everything, the only being who is timeless in both spirit and body, who effortlessly causes the creation and then just as easily destroys everything – is there any one word that suffices? Is there a specific form or name that encompasses all aspects? The descents of the Divine provide clarity. Like having a number written out instead of being shown only the digit form, the Supreme Lord’s appearances clear up any misconception about who or what He might be. The occasion of Rama Navami celebrates one such descent.

“Neti, neti.” Those who are familiar with Vedanta philosophy have come across this expression many times. It means “not this, not that.” It is used as a way to explain the unexplainable, the original being from whom all others emanate. The expression is very informative. It says that wherever you turn, you have not found God. 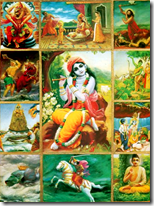 If He is not this and He is not that, does it mean that He is not an individual? Is He not even a He? In the Bhagavad-gita we learn that the origin of everything is a personality. He is Bhagavan, a Sanskrit term which His Divine Grace A.C. Bhaktivedanta Swami Prabhupada nicely and accurately translates into “the Supreme Personality of Godhead.” Of course these are just claims. Anyone can say anything. Therefore the speaker of the Gita gives further evidence. He says that He descends to earth in His personal form. He does this whenever He likes, but externally the apparent cause is the decline of religion and the rise of irreligion.

One of those descents was as Shri Ramachandra. “Neti, neti” says what God is not, but Shri Ramachandra says what God is. Ramachandra is also known by the shortened name of Rama, which appears in the famous maha-mantra: Hare Krishna Hare Krishna, Krishna Krishna, Hare Hare, Hare Rama Hare Rama, Rama Rama, Hare Hare. Krishna is the Supreme Personality of Godhead, and Rama is identical to Him. Rama is Krishna with a different visual, with certain features more pronounced and others suppressed due to the time and circumstance.

Rama appeared as the eldest son of King Dasharatha of Ayodhya. This king was part of the celebrated dynasty known as the Ikshvaku. Dasharatha was approaching old age and had yet to get a son to whom the kingdom could be passed. After performing a sacrifice at the advice of a brahmana, the king’s three wives became pregnant. Rama was the first one to appear, and so He immediately became the rightful heir, the crown prince.

Rama’s life and pastimes are chronicled in the Ramayana, a book authored by Maharishi Valmiki. As God is great, so many people appreciate His deeds to the point that they will also offer recollections and written plaudits. Therefore Rama’s activities are described in many works of the Vedic tradition, with some featuring more detail than others.

If you want to know who is God, you can say that He is the eldest son of King Dasharatha. There is no flaw in this statement. “Neti, neti” stops at Rama. You can go around pointing the “not this” finger at every object you see, but it won’t work with the moon of the Ikshvaku dynasty, the delight of Queen Kausalya.

If you want to know who is God, you can say that He is the life and soul of Lakshmana, another son of Dasharatha. God is the beloved elder brother to Bharata and Shatrughna as well. If you’re interested in finding out who is the supreme person, you can say that He is the protector of the sages in the forest, tapo-vana. The most prominent of these sages is the venerable Vishvamitra Muni. 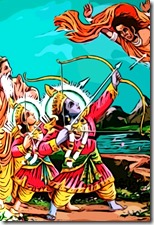 Rama is the slayer of the demons Tataka and Subahu. He is one part of an illustrious pair of fighters who give support to the pious. Lakshmana is Rama’s partner in battle, and the two brothers make for a splendid sight. When they traverse the forest, flowers rain from the sky. This is the appreciation of the devatas, the godly personalities who manage the various aspects of the material creation.

If you want to know who is God, you can say that He is the giver of liberation through removing curses. Simply by feeling the lotus foot of Shri Rama, Ahalya gained release from her curse. She was in the form of a stone for an offense she had committed previously. Meeting Rama freed her from the curse. Rama is also the one with the strongest arm in the world. His arm is the only one capable of lifting the heaviest bow in the contest of King Janaka. 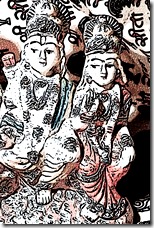 Rama is the life and soul of Sita Devi, the daughter of King Janaka. He is Sita’s beloved husband, and the person whom she serves lifetime after lifetime. Rama is the protector of the sages of the Dandaka forest, who are constantly harassed by the evil night-rangers coming from Lanka. Rama is the friend of Sugriva, the Vanara king from Kishkindha. 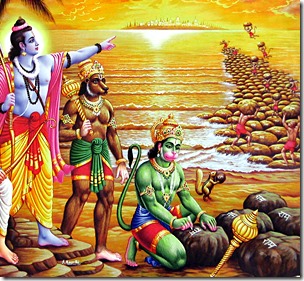 If you want to know who is God, you can say that He is the leader of the Vanara-army which built a bridge made out of floating stones. Rama is the slayer of Ravana, the one of a terrible roar, who kept the innocent people of the world in fear for many years. Rama is the savior of Vibhishana, the pious-souled Rakshasa who succeeded Ravana after the demon’s demise. Another way to know God is to say that He is the person the brave Hanuman loves and serves with spotless devotion for all of eternity. 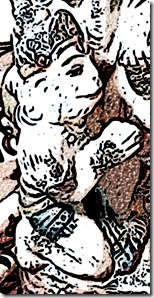 As “Neti, neti” applies to everything we see around us, it seems to be much greater than a single individual. But that is the glory of God, for through one lifetime He displays greatness that far exceeds anything we could imagine. The glories of Rama know no end, and so the descriptions of Him are larger in volume than that which describes what He is not. The occasion of Rama Navami is an opportunity to remember that greatness.

“Neti, neti” not this to mean,

God not anything that we’ve seen.

Applies to all Rama except,

Who tapasya of sages protects.

God to this world descending,

And to be human being pretending.

So that true understanding of Him we’ll receive,

Doing things we could never believe.