“As the director of different kinds of clouds, Indra called for the samvartaka. This cloud is invited when there is a need to devastate the whole cosmic manifestation. The samvartaka was ordered by Indra to go over Vrindavana and inundate the whole area with an extensive flood. Demonically, Indra thought himself to be the all-powerful supreme personality.” (Krishna, The Supreme Personality of Godhead, Vol 1, Ch 25)

“Svarga-loka. It is a real place. That word is used in common conversation to describe something pleasurable and good. As in English someone would describe something as ‘heavenly,’ so those speaking languages descending from Sanskrit make the comparison to ‘svarga’ when enjoying an enhanced experience.

“I’m just wondering why the acharyas of the Vedic tradition, particularly within the succession of Vedanta or bhagavata-dharma, tend to de-emphasize svarga. They quote verses from the Bhagavad-gita that describe people as less intelligent who worship residents of that region. Shri Krishna even says that a person has had their intelligence stolen when they take full shelter of a particular deva.

“If heaven is so bad, why does it even exist? Why not encourage people to reach for something better? What is the harm?”

When everyday experiences get compared to heaven, that is evidence that the region is not that much different. Eternal condemnation to the hellish region is a way for the less intelligent to scare others into following their particular faith, but the truth is that we already experience both.

When times are good, it is like heaven. When I am in trouble, it feels like I am already in hell. The regions explicitly designated as such simply have extended durations in stay and enhancements in experience.

In other words, by reaching heaven, I enjoy for a longer period of time. Instead of eagerly anticipating happy hour after the completion of the work day, I could be consuming the most intoxicating beverages around the clock. Instead of looking to survive an extra ten years, I could remain where I am for thousands of years, staying so long that I forget that I will have to one day leave.

2. You don’t get to stay there forever

This is the main drawback. You are not guaranteed to stay in svarga-loka. Entry is monitored through something like a timecard. This has the balance of accumulated meritorious credits. All the good you have done. The pious activities. The religious observances recommended for auspiciousness. Good behavior, such as honesty, compassion, charity and the like.

Those reward points, if you will, translate to time in heaven. Once the balance runs out, you have to fall back to the earthly region, to work again for the accumulation of credits. What sane person would intentionally strive to be placed on such a spinning wheel and what saintly leader would choose this as the best destination for their followers?

3. It is not self-sufficient

From an incident described in Bhagavata Purana, we see that svarga-loka is not even self-sufficient. There is the issue of creation. Someone had to put the place together; it did not magically appear. There is someone or something in the background providing the elements necessary for the enjoyable experience. 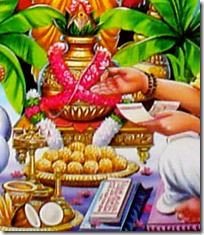 Setting aside the creation and maintenance aspects for a moment, the quality of life is not sufficient for keeping a person happy. We can look to the king of that region. Known as Indra, he should be calm and content. He should feel pride in the leadership post. He should be satisfied knowing that he has power and ability.

The truth is that the devas, the demigods, survive on yajna performed on earth. Yes, the people who are outside of heaven are the ones providing the means for heavenly life to continue. Something like taxation without representation, except the yajna has the reciprocal benefit of accumulating pious credits which would one day translate to entry into that higher place.

Indra one time became extremely upset that people in a village area on earth decided to bypass a yajna in his honor. This was a chance occurrence. There was no insult intended. The people decided to shift their preparations to the nearby Govardhana Hill, instead. This was at the direction of Shri Krishna, the darling young child of the leader of the community, Nanda Maharaja.

If svarga-loka is so great, then Indra would not have cared. These people of Vrindavana worshiped him plenty of times in the past. They would likely return in the future. Many other yajnas going on. Why be concerned with the daily happenings of earth when you are supposedly enjoying in heaven?

As the place is not self-sufficient, Indra grew to a rage that required retribution, in his mind. He sent the most devastating raincloud to inundate the area around Govardhana Hill. The people, the cows, the trees, the hills, and particularly Krishna, the instigator, would suffer.

The plan did not go as envisioned. The people were protected by Krishna, who is the Supreme Personality of Godhead. Wherever He goes turns into Vaikuntha, which is the eternal heavenly realm, never created or destroyed and never dependent on others. Nanda’s child lifted Govardhana Hill and used it as an umbrella to save the people from Indra’s wrath. 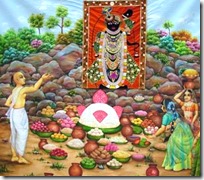 The wise give higher priority to Krishna, favoring Him over any promise made to have a temporary stay in a place of enhanced material enjoyments. They rely on Nanda’s son alone, and focus always on His pleasure, looking to keep the Vaikuntha atmosphere, both today and in the future.

Why for heaven to care,
When of limited time aware?

That on yajna worship to rely,
Despite in realm living high.

Where Indra into wrath fallen,
Because of envy fit befallen.

Better shelter of Govardhana taking,
Which that time umbrella making.