Home › reincarnation › We Get What We Want

We Get What We Want 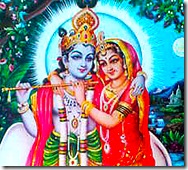 “When freed from all material affection, the soul, giving up the gross and subtle material bodies, can attain the spiritual sky in his original spiritual body and engage in transcendental loving service to the Lord in Vaikunthaloka or Krishnaloka.” (Shrila Prabhupada, Chaitanya Charitamrita, Adi 2.91-92 Purport)

This is the definition of mukti, or liberation. We living entities are currently in a conditioned state, forced to suffer the miseries of material life, but this is actually not our original nature. Our home is in the spiritual sky with God.

Conditional life means being trapped in a material body. Our identity doesn’t come from the attributes of our body, for our features are constantly changing. When we first took birth, we were tiny infants, helpless and completely dependent on our parents. As we grew older, our bodies went through various transformations. Throughout this time, our identity remained the same. This is because identity comes from the atma, or spirit soul. The body is just a covering that gets created and then ultimately destroyed. The soul never dies.

The material world is governed by guna and karma. Gunas are qualities: goodness, passion, and ignorance. Originally the spirit soul, being part and parcel of God, resided in the spiritual sky, but upon entering the material world, it accepted a material body possessing gunas. Each living entity possess the three qualities of material nature in varying degrees, thus we see so many different species, up to 8,400,000 varieties. Along with guna, the material world is also governed by karma, or fruitive work. The living entity is constantly working, even if it doesn’t know it. We may be studying in school or going to the office every day, or even simply sitting at home and doing nothing. This is all fruitive activity (karma), meaning we desire some material benefit out of performing such work. In science, there is a law that states that every action has an equal and opposite reaction. This is essentially how karma works. As soon as we do anything for some personal benefit, there is a resultant consequence, either good or bad. Everyone possesses gunas, and everyone is accumulating karma. Some person may be a wealthy businessman, while another person may be a simple laborer, but they are both performing fruitive activity. Karma repeats itself in a cycle. Each day, the same actions are being performed, though through the power of maya, we fail to recognize this repetitious pattern.

At the time of death, our karma determines what type of body we receive in the next life:

“Whatever state of being one remembers when he quits his body, that state he will attain without fail.” (Lord Krishna, Bg. 8.6)

Though we may lament over the event of death, it is actually nothing more than the changing of bodies. Just as our current body has changed throughout our lifetime, at the time of death, when our current body ceases to be useful to us, we discard it and get a new one. This is actually the mercy of God. Since we want to enjoy material nature, He gives us every facility to do so. If our bodies become old and decrepit, He gives us a new body to allow for a fresh start in our pursuit of happiness.

The soul never dies. It is completely spiritual in nature, so it is not subject to creation and destruction like the gross material body.

“It is said that the soul is invisible, inconceivable, immutable, and unchangeable. Knowing this, you should not grieve for the body.” (Lord Krishna, Bg. 2.25)

At the time of death, our desires and the work we’ve previously performed determine what type of body we get in the next life. For example, it is the widely accepted belief of people of faith around the world that if one is pious in their current life, they will ascend to heaven after death. In a similar manner, sinful people will go to hell. The Vedic definition is in line with this, except the Vedas give even more details of just how long one resides in heaven or hell. Heaven and hell certainly do exist, but they are just planets in the material world. Residence there is not permanent. For every pious action we perform, we accumulate merits, and similarly, for every impious action we perform (acts contrary to the injunctions of the scriptures), we accumulate demerits. To ere is human, so everyone accumulates both merits and demerits. Depending on which one is greater, one goes to heaven or hell after death.

“He who enjoys first the fruits of his good deeds must afterwards suffer in hell. He, on the other hand, who first endures hell, must afterwards enjoy the celestial region. He whose sinful deeds are many enjoys the celestial region first. It is for this, O king, that desirous of doing you good, I caused you to be sent for having a view of hell.” (Lord Indra speaking to Yudhishthira, Mahabharata, Svargarohanika Parva)

In the Mahabharata, there is a famous scene at the end where King Yudhishthira ascends to heaven after death, and he is surprised to see his cousin Duryodhana there. Yudhishthira lived a very pious life, for he was the son of Dharmaraja, the god of justice. On the other hand, Duryodhana was quite sinful. Yudhishthira couldn’t believe that Duryodhana was in heaven with him. It was then explained to Yudhishthira that if a person is more sinful than they are pious, they will first reside in heaven after death, since their residence there will not last for very long. Duryodhana had died while fighting nobly on the battlefield, which meant ascension to heaven was guaranteed for him. Yudhishthira and his family went to hell for a very short period of time, eventually ascending to the spiritual planets. They were great devotees of Lord Krishna, so they were actually above karma. Still, this example illustrates the effects of pious and sinful deeds. Each person’s merits and demerits eventually expire, and they will then have to come back to the material world and go through the cycle of birth and death all over again.

Our present bodies are the result of our past karma. We see that certain people are born with special powers or gifts that are out of the ordinary. Tennis star Roger Federer took up the game when he was very young. For this reason, he has grown up to be one of the greatest tennis players to ever play the game. Therefore, It must be concluded that his previous karma allowed him to receive his present body. In the same fashion, we see that many living entities don’t even make it out of the womb, for they are killed through the abortion process. It must be understood that they were quite sinful in their previous lives, thus they have to suffer again and again.

While this cycle of birth and death repeats itself for those engaged in karma, there is a way out, which is known as mukti, or liberation.

“And whoever, at the time of death, quits his body, remembering Me alone, at once attains My nature. Of this there is no doubt.” (Lord Krishna, Bg. 8.5)

Mukti means reaching the end of the line because it is the state where one becomes immune to the effects of guna and karma. How does accomplish this? By becoming Krishna, or God, conscious. There are many different kinds of religions, but the ultimate purpose is for one to elevate themselves to the stage where they know and love God. According to the Vedas, the concept of religion is referred to as sanatana dharma. Sanatana means that which has no beginning or end, and dharma is one’s occupational duty. Real religion actually means the eternal occupation of man, not just a blind faith. That eternal occupation is the loving service to Lord Krishna. The true nature of the soul is to be a servant of God. While fruitive activity is on the material platform, bhagavata-dharma, or devotional service, is completely immune to the effects of karma. If ones works in Krishna’s interests, or if one humbly offers service to one of His faithful servants (the devotees or a spiritual master), then karma can’t touch them. And why should it? Karma only exists to facilitate personal material desires. It has nothing to do with Krishna. When the Lord personally appears on earth, some mistakenly believe that He becomes subject to guna and karma, but this is not the case.

“Fools deride Me when I descend in the human form. They do not know My transcendental nature and My supreme dominion over all that be.” (Lord Krishna, Bg. 9.11)

Krishna is the Supreme Controller, ishvara, so He is not subject to any laws of the material world. In a similar manner, if we performed service for Him, connecting with Him at all times, then we too become immune to karma. At the time of death, we are immediately transported to the spiritual sky where we can associate directly with Krishna.

The spiritual world is a place of pure happiness. God is described as having a body full of knowledge and bliss, sach-chid-ananda-vigraha. There are millions upon millions of planets in the universe, and in order to reside on any one of them, one requires a suitable body. For example, human beings can’t survive in the water, and fish can’t survive on land. This is due to differences between the two body types. When we go to the spiritual world, we are given a body just like Krishna’s. Residence in the spiritual realm means a place full of bliss and knowledge. There is no hankering or lamenting when residing in Krishnaloka or Vaikunthaloka.

As far as the difference between the two spiritual realms, Krishnaloka is where Krishna Himself resides. The analogy of a lit candle is given to illustrate this point. Krishna is the original candle, yet He personally expands Himself as avataras which are lit from the original candle. While each candle is the same in power, there is still an original candle, which is Krishna. Vaikunthaloka is the realm where all of Krishna’s expansions such as Lord Narayana, Rama, Narasimha, etc., come from. God is so kind that He lets us associate with Him in the manner that we choose. These transcendental mellows, or rasas, allow each person to love God in a way that gives them the most pleasure.

One simply has to want to go to Krishna’s world, and that, in itself, will be enough to get them there. Sincerity and devotion are what is required. God gives us what we want. If we desire the repetitious cycle of hankering, lamenting, birth, and death, He will gladly allow us to continue. He doesn’t force anyone to love Him. The love must come from us. If we practice to love Him in this life, we will surely return back to home, back to Godhead.