“…According to the age, O my Lord, You protect the principles of religion. In the age of Kali, however, You do not assert Yourself as the Supreme Personality of Godhead, and therefore You are known as Triyuga, or the Lord who appears in three yugas.” (Prahlada Maharaja, Shrimad Bhagavatam, 7.9.38)

Shri Chaitanya Mahaprabhu is Krishna Himself, the Supreme Personality of Godhead. Lord Chaitanya appeared in India some five hundred years ago to spread the sankirtana movement. The authoritative Vedic texts, including the Shrimad Bhagavatam and Mahabharata, all confirm His divinity. Even though Lord Vishnu is described as Triyuga, meaning one who appears in the three Yugas (Satya, Treta, and Dvapara), He still makes an appearance in the Kali Yuga, though in the disguised form of a brahmana devotee. Lord Chaitanya is the same Lord Krishna who appeared in the past, and worship of Him is as good as worship of God.

The Vedas, along with other major religions of the world, prescribe various sacrificial demonstrations and rituals. The universe is constantly created and destroyed, and the duration of each creation is divided into four time periods called Yugas. For each Yuga, there is a specific process of self-realization that is recommended. This is due to the fact that society’s adherence to dharma, or religiosity, gradually diminishes over time. Accounting for the increase in adharma, the Vedas loosen the requirements for achieving transcendental perfection. This is done to allow anyone, regardless of which age they take birth in, to be able to return back home, back to Godhead.

The Vedas tell us that as spirit souls, we are eternal, but our gross material bodies are not. We come to this material world to enjoy, and this sense enjoyment continues for as long as we want it to. The catch is that our pursuit of happiness is not without consequences. Every action performed has a commensurate reaction, either good or bad. This is karma. As long as we act on the material plane, we must abide by the laws of karma, which determines our future fate. The true mission of life is to break free of the clutches of karma by becoming Krishna, or God conscious. One who thinks of God at the time of death, never has to return to this material world.

"That abode of Mine is not illumined by the sun or moon, nor by electricity. And anyone who reaches it never comes back to this material world." (Lord Krishna, Bhagavad-gita, 15.6) 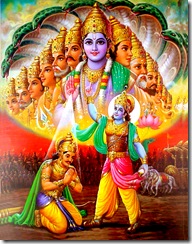 Spirit souls aren’t limited to taking birth in the human species. Based on qualities and desires, a spirit soul can be put into the body of an animal or even a plant. The human form of life is considered a great boon since it represents our chance to acquire knowledge about God. Needless to say, this opportunity should not go to waste. Since the beginning of creation, the religious system originally contained in the Vedas has been passed down from generation to generation to allow mankind to acquire the knowledge necessary for returning back to the spiritual world. The Vedas don’t actually have an equivalent term for religion. What we think of as religion is actually referred to as sanatana-dharma, meaning the eternal occupation of man. It is the duty of the spirit soul to be connected with God eternally, but through misdirected desires for lording over nature, we have been placed in this material world. The Vedas are the personification of sanatana-dharma, and they give us step by step instructions on how to reconnect with our lost occupation.

Based on the specific time and circumstances of our birth and the specific qualities we inherit, we may or may not be able to immediately come to the realization of our nefarious predicament. Upon taking birth, we are actually no different than animals. An animal simply concentrates on four things: eating, sleeping, mating, and defending. Human beings also engage in these activities, but they should be of secondary importance. Our primary occupation should be service to God. To help us rise above the animalistic way of life, the Vedas give us various systems, sub-religions if you will, that allow us to make gradual progress. The analogy of the school system can be used here. If one receives a high school degree, it means they are able to demonstrate a certain proficiency in various academic subjects. This knowledge is not easy to acquire, thus the school system in America is divided into twelve grades, where one begins in the first grade and gradually advances one grade each year until they finally graduate. The end goal is to graduate from the twelfth grade, but a young child usually can’t acquire all the necessary knowledge right away. They must be taught certain things early on in school, building a foundation, and then build on their academic knowledge year by year.

Religion is very similar in this regard. Probably the most common activity associated with religion is the ritual or sacrificial demonstration. Going to church, wearing certain things on one’s head, uttering certain prayers or mantras; these things are common to all religions. The Vedas have an entire section, known as karma-kanda, dedicated to these rituals aimed at procuring fruitive rewards. Almost all religious rituals are performed for some personal benefit. In the beginning stages, this is certainly not a bad thing. It is quite common today for people to work hard for acquiring great wealth and fame without realizing that God is the actual source of everything.

“The Absolute Truth must be the original source of everything.” (Vedanta-sutra)

Since most people live on the material platform where karma reigns supreme, the Vedas recommend various sacrifices and rituals. The ultimate aim is to teach people that God and His various agents, the demigods, are responsible for all our material rewards. Government, the state, the land, and whatever else actually can’t create anything. Life comes from life.

“In the beginning of creation, the Lord of all creatures sent forth generations of men and demigods, along with sacrifices for Vishnu, and blessed them by saying, ‘Be thou happy by this yajna [sacrifice] because its performance will bestow upon you all desirable things.’” (Lord Krishna, Bg. 3.10)

Each ritual has specific rules that apply to them which describe the who, what, where, when, and how as it pertains to the ritual’s performance. In the Vedic tradition, all important rituals are performed in front of fire. The fire is the witness in a sacrifice, with clarified butter being poured on the fire as an oblation. The name Svaha is uttered with each pouring. Other religions have their own specific ceremonies and rituals.

This is all meant to be a gradual stepping stone, a way to elevate a person’s consciousness to a point where they are always thinking about God. To know and love God is the real purpose of religion. The specific rules and regulations may vary based on time and circumstance, but any religion is considered bona fide if it teaches people how to love God.

Though these sacrificial demonstrations serve only as a stepping stone, they are still worth performing, provided that the intentions are noble. Visiting churches and temples, performing pujas in the home, and travelling to places of pilgrimage certainly aren’t condemned. In fact, they are recommended. However, in this age of Kali, these rituals aren’t easy to perform regularly.

Kali Yuga means the age of quarrel and hypocrisy where dharma exists at only one quarter its original strength. Evidence of this is all around us. We are so advanced materially in this age that it is easy to become distracted from religious life. For proof of this fact, we can simply take stock of our own life experiences and those of the people around us. How much time do we spend in the day thinking about God? Many of us make sincere efforts, but it’s not so easy with all the responsibilities that we have. In the modern day, families are spread apart, and two income families are often required. This makes raising children even more difficult. Maintaining a job, a wife or husband, and children all at the same time can be very difficult. The pressures of daily life can get to be too much. With so much going on in our life, worship of God can easily get pushed to the backburner. 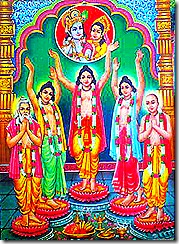 “Shrila Jiva Gosvami cites a verse from the Vedic literature which says that there is no necessity of performing sacrificial demonstrations or ceremonial functions. He comments that instead of engaging in such external, pompous exhibitions, all people, regardless of caste, color or creed, can assemble together and chant Hare Krishna to worship Lord Chaitanya.” (Shrila Prabhupada, Chaitanya Charitamrita, Adi 3.52 Purport)

Luckily for us, Krishna knew this situation would manifest in the Kali Yuga. For this reason, He made the path towards self-realization much easier in this age. Elaborate sacrifices aren’t required today. We simply have to think about God as much as we can. So how do we do this? We simply have to chant His name as much as we can, “Hare Krishna Hare Krishna, Krishna Krishna, Hare Hare, Hare Rama Hare Rama, Rama Rama, Hare Hare”. Unlike the strict rules and regulations attached to grand Vedic sacrifices, chanting can be performed by anyone. The secret to this method’s effectiveness lies in its ability to induce people to both speak and hear God’s name at the same time. Sravanam and kirtanam, hearing and chanting, are the two most effective methods for increasing God consciousness. If one chants out loud, he will automatically hear God’s glorious names. Hearing can also be accomplished in other ways, such as listening to Krishna katha (discourses about Krishna), and reading books about Him.

Chanting is the recommended type of sacrifice for the world of today. One should make a sincere effort to chant the Hare Krishna mantra as often as possible, but at least sixteen rounds a day on a set of japa beads. If one develops a solid chanting routine and adheres to the four regulative principles of devotional service, they can then venture into other aspects of devotional service such as deity worship, prasadam offering, fasting, etc. The most important thing is to always stay connected with Krishna. That was the point stressed by Lord Chaitanya. Appearing as a brahmana by birth and quality, Lord Chaitanya spread love of Krishna to anyone who was willing to accept it. For this reason, He is the most merciful incarnation of God. The highest honor we can pay Him is to dedicate ourselves to regularly chanting Krishna’s names.