Home › glories of lakshmana › Like a Fish Out of Water

“O Rama, You should know that just as fish cannot survive when taken out of water, neither Sita nor I can live without You for even a moment.” (Lakshmana speaking to Lord Rama, Valmiki Ramayana, Ayodhya Kand, 53.31)

Each person is born with specific qualities, or gunas as they are referred to in Sanskrit. The presence of guna and karma is what defines the material world. In the Vedic texts, sometimes God is described as nirguna, meaning without attributes, and sometimes as saguna, meaning with attributes. Every living entity possesses gunas, but God never does. When He descends to earth and takes a human form, He may be described as saguna, but that doesn’t mean that His body is material. It is a grave error to think this way. God is never conditioned in the way that we are. In the spiritual world He is sometimes described as nirguna because He has no set material form, but He is still a person nonetheless.

When the living entities come to the material world, they accept gunas based on their karma. Based on fruitive desires and work performed in the past, a spirit soul is put into an appropriate body. The three gunas are sattva (goodness), rajo (passion), and tamo (ignorance). Just as when we mix various chemical elements together in different proportions we can produce varying compounds, so the infinite combinations of gunas combine to create the various 8,400,000 species.

A person inherits specific characteristics based on the type of body given to them by nature. For example, the aquatic species have gills, meaning they can only survive in the water, whereas human beings are meant to live on land. Penguins have a body suitable for living in colder climates; birds can live on tree branches since they can fly high in the sky, and so on. This is all part of nature. There is nothing anyone can do to change these realities, though human beings have spent a lot of time trying. We invested much time, energy, and money in space exploration, but the Vedas tell us that this is all a waste of time. If we want to go to the moon or the sun, or anywhere else in space, God will happily give us a suitable body for such purposes. We needn’t try to travel to these places in our present bodily form because such efforts will always prove to be futile. Man has gone to the moon, but only after building large spacecrafts. There is nothing natural about a man living on the moon or any other planet except earth. In a similar manner, man doesn’t need to try to fly, for birds already have that capability. God specifically gave us this human form of life so that we could use it for the highest purpose, that of knowing and loving Him.

God has incarnated hundreds of thousands of times; actually too many times to even count. From the authoritative scriptures such as the Puranas and Mahabharata, we get an idea of some of the primary incarnations. One of them was Lord Rama, a pious prince who took birth as the eldest son of Maharaja Dashratha, the king of Ayodhya. Dashratha was part of a long line of chivalrous kings descending from Ikshvaku, one of the first kings in history. Rama was dedicated to dharma and possessed a flawless character; He was loved and adored by all the citizens. In each incarnation, the Lord performs specific pastimes, referred to as His lila, to teach a lesson to His devotees. One such pastime was Lord Rama’s acceptance of a fourteen year exile period handed out by Dashratha. Coming on the eve of His would-be coronation as the new king, Rama took the news in stride and prepared for His departure without much fanfare. His wife, Sita Devi, and younger brother, Lakshmana, however, didn’t take to the news very well. Lakshmana was quite outraged and begged His brother to remain in the kingdom and overtake the throne by force.

Not willing to do that, Rama left for the forest along with Sita and Lakshmana. Early on in their journey, Rama started to lament the plight of His father and mother, so He asked Lakshmana to return to the kingdom and take care of them. In the above referenced statement, Lakshmana is responding to Rama’s request by boldly declaring that both he and Sita could not live without Him, for they would be like fish out of water living in a kingdom devoid of Rama.

These are qualities exhibited by only the most advanced devotees. A bhakta, or devotee, dedicates their life completely to God. While most of us look for happiness in the areas of sense gratification, economic development, or ritualistic religious performances, devotees abandon all these things in favor of direct service to God. He is their only hope and savior, for they know that God is the reservoir of all pleasure. Life with Him is pure bliss and anything else is pure misery. Bhaktas reach an advanced stage of consciousness where they can only think of God at all times.

“Both of you, husband and wife, constantly think of Me as your son, but always know that I am the Supreme Personality of Godhead. By thus thinking of Me constantly with love and affection, you will achieve the highest perfection: returning home, back to Godhead.” (Lord Krishna speaking to Vasudeva and Devaki, Shrimad Bhagavatam, 10.3.45) 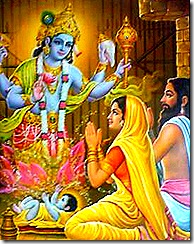 Being God conscious is actually the constitutional position of the spirit soul but, through contact with material nature and God’s illusory energy known as maya, the living entities become bewildered into thinking only of material sense gratification and forgetting about God altogether. Material life means always making plans. “I will eat this type of food from now and that will make me happy. I will avoid this particular activity because I am getting very bored of it. I will buy such and such technological device and that will make life so much easier.” These are some of the plans we make, but none of them ever pan out. We are always left wanting more. It’s not our fault since that is how nature is supposed to act. Maya is always throwing things in our way, foiling our every plan because that’s actually what we want. Maya says, “Okay, you want to make new plans? Fine. I will keep throwing obstacles in your way so that you can do just that. After all, isn’t that what you want?” If we could be truly happy in this material world, we would never need to make any plans or adjustments.

Our real position is that of servants of God. God is great and, bereft of His company, we are anything but great. He is the master and we are the servant. He is the fire and we are the sparks emanating from that fire. These are some of the ways the Lord is described in the great Vedic texts. Our real home is in the spiritual world with God. The spiritual planets of Krishnaloka and Vaikuntha are where we are meant to stay. That is where the Lord resides in His original form and also in His various expansions. There are other heavenly planets, but they are all part of this material world, meaning residence there is not permanent. Those who go back home, back to Godhead, never have to take birth again.

“That abode of Mine is not illumined by the sun or moon, nor by electricity. And anyone who reaches it never comes back to this material world." (Lord Krishna, Bhagavad-gita, 15.6) 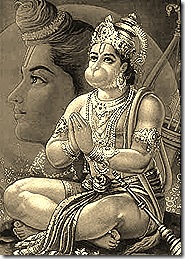 Just as fish struggle when taken out of water, we living entities struggle in this material world without God. That is the essence of what Lakshmana is saying. “Don’t leave us in the kingdom without You. We can never be happy in Your absence.” Lord Rama eventually acquiesced, allowing Lakshmana and Sita Devi to accompany Him during His exile period. While travelling in the woods together, Sita and Lakshmana were as happy as they had ever been. This is because they were executing devotional service directly in the presence of the Lord Himself. Later on, even in Rama’s absence, Sita Devi managed to survive the toughest of circumstances by always keeping her mind fixed on the lotus feet of Rama. By following in the footsteps of great devotees, we too can make the best use of a bad bargain. By always thinking of God, chanting His names, reading His books, and worshiping His deity, we can survive any material condition. In the spiritual world, God is constantly being glorified and worshiped by His pure devotees. If we can create the same environment here, our minds can swim in an ocean of bliss.