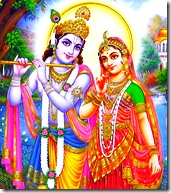 In life we find that many are devoted to honesty and piety. They value their integrity very much and strive to follow the path of righteousness at any and all costs. One who is thus situated is considered to be living in the mode of goodness according to the Vedas.

Material life means the existence of gunas, or qualities. Every living entity possesses the qualities of goodness, passion, and ignorance to varying degrees. Sometimes goodness outweighs the other qualities. This is the case with pious and virtuous people. The mode of goodness can be characterized by acts of charity, kindness, and regard for the general welfare of others. Most importantly, the mode of goodness means acting according to knowledge. We are all born ignorant. At the time of birth, we inherit qualities due us as a result of previous karma, but otherwise, we have no knowledge of anything. For this reason we require parents and teachers to guide us along in our formative years. The elders are wiser than us because they have learned through experience. They too were completely ignorant at one point, but gradually they acquired knowledge as they grew older.

Once people acquire sufficient knowledge, they start to act accordingly. For example, we see that many famous celebrities who grew up in poverty now take to philanthropy and other acts of charity. The famous country singer Shania Twain grew up in very austere conditions as a child. Her parents weren’t very well off, so there were many nights when she would go to bed hungry. Later on in life while she was still young, she suffered through the horrible tragedy of having both her parents die in a car accident. Shania was then forced into the role of provider and caretaker of her younger siblings. Through her experience, she gained knowledge of how difficult life could be. For this reason today she strongly support programs which feed the hungry. Her piety was acquired through knowledge and experience.

Those in the mode of goodness acquire good characteristics such as kindness and peacefulness. Again, these qualities are acquired through knowledge. Most of us really appreciate the kindness that others show to us, so we, in turn, try to give back the same kindness to others. As we grow older, we learn that being angry and worried all the time isn’t very healthy for us. Through knowledge we acquire shanti, or peacefulness.

While these forms of piety and virtue are indeed noble, the highest form of dharma is devotion to Krishna, or God. Actually, all other forms of pious acts are subordinate to this. God has given us the three material qualities as a sort of stepping stone, whereby one can make gradual process towards the ultimate aim of life, love and devotion to God. Sattva-guna, or the mode of goodness, is still a material quality. It is recommended that one act in this mode so that they can ultimately achieve the state of Krishna consciousness, which is pure goodness.

“When the embodied being is able to transcend these three modes, he can become free from birth, death, old age and their distresses and can enjoy nectar even in this life.” (Lord Krishna, Bg. 14.20)

Everything emanates from the Supreme Absolute Truth, Shri Krishna. The Shrimad Bhagavatam states, “janmady asya yatah”. Contrary to the opinion of many, the Supreme Absolute Truth is not formless. God cannot be just a spirit, for He has an identity. Just as our spirit souls identify us, God’s feature as Bhagavan, or the Supreme Personality of Godhead, identifies Him. Since He is all-powerful and omnipotent, He is capable of taking many forms simultaneously. Yet we shouldn’t mistakenly think that anything and everyone is God. We are His expansions, the same qualitatively as God, but different quantitatively.

“O Lord of earth, the dharma which led You to this path and has blinded Your intelligence, I do not like.” (Lakshmana speaking to Lord Rama, Valmiki Ramayana, Ayodhya Kand, 23.11)

In the above referenced statement by Lakshmana, we see that pure devotees of God repudiate any form of virtue or piety which goes against God. When Krishna incarnated as Lord Rama many thousands of years ago, He voluntarily accepted banishment to the forest for fourteen years. This order was given by His father, Maharaja Dashratha, just on the eve of Rama’s would-be coronation. Lakshmana, Rama’s younger brother, was quite outraged at this situation. He couldn’t understand why Rama was going along with this. Lakshmana was more than willing to take over the kingdom by force and install Rama as the new king. Rama agreed to Dashratha’s order out of deference to dharma, or religiosity. He was the eldest son of the king, so whatever the father wanted, that’s what Rama would do. This is generally the proper way for a son to conduct himself. The parents are the first gurus. They are to be treated as good as God Himself. Once a person gets initiated by a spiritual master, signaled by the investiture of the sacred thread, they begin their second and more important birth. At that time, the spiritual master becomes the guru.

Lord Rama adhering to His father’s wishes seemed like the proper thing to do, and it was actually so. However, Lakshmana accurately points out that real dharma is anything which makes God happy. Lakshmana boldly declares His hatred for any other type of so-called virtue. He had no desire to be a pious person if that meant acting against the interests of his brother. In this sense, Lakshmana displayed the highest form of devotion.

Nevertheless, Rama’s actions were still proper. There were higher purposes to be served by His going to the forest, namely the death and destruction of Ravana and his Rakshasa empire. King Dashratha also had been cursed on a previous occasion to the effect that he would die due to the pain of separation from his son at a young age. The curses of brahmanas must always hold true, thus Lord Rama showed deference to this curse. Still, Lakshmana’s mood of devotion was greatly appreciated by Rama. It represented the highest form of knowledge, something we should all strive for. Lakshmana and Sita Devi, Rama’s wife, both were allowed to accompany the Lord during His time in the forest. This was the boon granted them for the pure love they showed Him.

Lakshmana was the incarnation of Ananta Shesha Naga, or Sankarshana. In essence, He is God’s immediate expansion, almost equal in potency, always serving as His support. The spiritual master is considered the representative of Sankarshana, thus we can always tell whether a guru is bona fide or not by comparing their actions to those of Lakshmana. A qualified spiritual master is one who has as much love and respect for God as Lakshmana did. They serve as the perfect guides, teaching us the real system of piety.