“After rising early in the morning, Mother Yashoda first of all offered her breast milk to Krishna, and then she began to chant various mantras for His protection. Then she would decorate His forehead very nicely and bind His arms with protective talismans. By all of these activities, it is definitely understood that she is the emblem of all maternal affection for Krishna.” (The Nectar of Devotion, Ch 43)

The local bookstores are filled with reading material covering a wide range of topics. One can find the latest bestsellers, biographies from the most celebrated personalities, reference guides on how to take on certain tasks for “dummies”, and even self-help books to aid with self-esteem and positive thinking. The parenthood section of the bookstore is certainly a popular one with newly expecting parents who want to prepare themselves for raising their child. Bringing a child into this world requires so much effort as it is, so parents want to make sure they do everything right and limit their mistakes. One would be surprised to find out, however, that simply by taking to devotional service to God, all of life’s questions can be answered. With a simple shift in consciousness, the preparation required to tackle any of life’s difficult tasks comes automatically. This is especially true of the task of parenthood.

Pregnancies are obviously tougher for the women who have to endure them than for the fathers. There are so many bodily changes, from one’s appetite increasing, to changes in mood, and even sickness that can lead to vomiting. While all this is going on, a brand new life is developing within the womb. This certainly can become overwhelming, especially for first-time mothers. To alleviate their pains and worries, many expecting parents take to reading guides on parenthood and pregnancy. Probably the most famous book is What To Expect When You’re Expecting. The title is clever enough to attract the eye of even the least inquisitive of minds.

Yet even if a person is extensively briefed beforehand, nothing can quite prepare a person for becoming a parent. Once the child is born, the responsibilities are greatly increased. How does one even care for a brand new child? What should be done if the child is crying? How often should the baby be fed? These sorts of issues eventually work themselves out, but it’s nice to have some information beforehand, or better yet, someone to turn to. While the experts on television and in print certainly provide great insight, no one is wiser than the parent who has already successfully raised a child. In this regard, our own parents and grandparents prove to be invaluable resources. Ponder this thought for a second: A mother who has successfully raised multiple children from infancy to adulthood automatically becomes an expert in motherhood. Through experience and on the job training, they acquire an expert’s understanding of the day-to-day workings of parenthood and how to juggle the responsibilities of satisfying the husband, children, and housework.

For followers of the Vedic tradition, the motherly wisdom that is employed in the raising of a child can actually be traced back thousands and thousands of years. One of the most famous mothers in history is Mother Yashoda, the foster-mother of Lord Shri Krishna, the Supreme Personality of Godhead. There is only one God, but due to His causeless mercy, He is kind enough to appear on earth from time to time in His original form. About five thousand years ago, one such appearance took place in the transcendental city of Vrindavana. This city is considered spiritual because it is a replica of the same Vrindavana that exists in the spiritual world. God can never associate with material nature after all, so when He appears on earth, His home, family, friends, etc., are all transcendental.

What does this mean exactly? Material life equates to bondage, with a person becoming subject to the laws of nature. For example, if there is a hurricane, severe drought, scorching heat, or bitter cold, we must equally suffer. We can make different adjustments to our living conditions, but there is nothing we can do to stop these forces of nature. In this respect, we living entities are subordinate to the divine forces. God, on the other hand, is the creator of the divine nature, so He can never become subordinate to its influence. This means that when He comes to the material world, He remains transcendental and free from all defects. 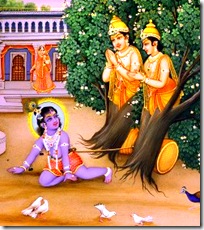 Vrindavana is celebrated because that is where Krishna spent His childhood years. Playing the part of an ordinary child, Lord Krishna charmed all the residents of Vrindavana, who were mostly cowherds by trade. Krishna grew up in the home of Nanda Maharaja, the King of Vraja, and his wife Yashoda. Obviously no one can be God’s parents, but since the Lord was playing the role of a human being, He kindly accepted parents. Interestingly enough, Yashoda and Nanda were considered Krishna’s foster parents since the Lord had appeared out of the womb of Devaki, the wife of Vasudeva. Devaki and Vasudeva lived in Mathura, where they were captives of King Kamsa, Devaki’s brother. A prophecy had stipulated that Devaki’s eighth son would kill Kamsa, hence the demon decided to lock up his sister and kill each one of her children. In order to save Krishna, Vasudeva transferred Him to Vrindavana immediately after His birth.

In Vrindavana, Krishna was offered the highest form of parental love from Yashoda and Nanda. In the above referenced excerpt from The Nectar of Devotion, a summary study of Shrila Rupa Gosvwami’s Bhakti-rasamrita-sindhu authored by Shrila Prabhupada, we see that Yashoda was the perfect mother in every respect. Her daily activities consisted of tending to all of Krishna’s needs, while maintaining the household at the same time. The women of Vrindavana were the original “working women”; they spent all their time engaged in some type of work for the family. When they weren’t caring for the children, they were churning butter, making yogurt, cooking preparations to be offered to God, travelling to the market to sell their surplus butter and cream, etc. Since all of their work revolved around Krishna and Krishna consciousness, they were always in yoga. 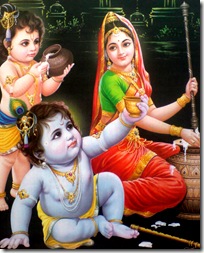 Mother Yashoda’s daily routine actually serves as a perfect guide for devotional service. One simply has to always be thinking of Krishna to achieve perfection in life. Though Krishna may not be personally present before us today, He kindly appears in His deity form. We are instructed to view the deity to be the same as the Lord. Therefore we can dress it, bathe it, and offer it nice food preparations. This is our primary business, no matter what our disposition is. We also see that Yashoda’s love for Krishna automatically made her the perfect mother. This is the result of bhakti-yoga. God is the origin of everything, so it would make sense that by taking care of Him, one would acquire the necessary knowledge to handle all of life’s ancillary issues.

Mother Yashoda’s exalted status is enhanced by the fact that she had no idea that Krishna was the Supreme Personality of Godhead. We should also take careful note of the fact that she chanted various mantras for Krishna’s protection every day. In her mind, this was the most important activity, for she knew that by asking for Lord Vishnu’s protection, Krishna would be safe. Ironically, Vishnu is just an expansion of Krishna. In the Vedic tradition, most people are devotees of Lord Vishnu, or one of His other non-different forms such as Rama, Narasimha, Krishna, Jagannatha, etc. 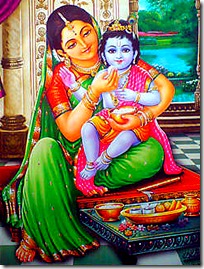 From Mother Yashoda’s example, we see that the best way to take care of a child is to kindly ask for God’s protection. Not just any God either, for there are many god-like personalities who can bestow material benedictions. Also many ordinary people are elevated to god-like status due to their wealth, fame, beauty, or extraordinary abilities in material endeavors. Vishnu is not like this. Vishnu worship brings salvation to the soul and eternal association in the afterlife with the original spiritual spark, the supreme energetic transcendent Lord. While it is certainly important to make sure our children are well fed, bathed regularly, and protected from dangers, the primary aim of human life is to link the soul with Vishnu, or God.

In this day and age, the best way to take care of our children is to regularly chant the sacred maha-mantra, “Hare Krishna Hare Krishna, Krishna Krishna, Hare Hare, Hare Rama Hare Rama, Rama Rama, Hare Hare”. This mantra addresses Krishna [Vishnu] directly and in a loving way. Mother Yashoda is a shining example of the greatness of the women of the Vedic tradition, and by following her level of devotion, we can never go wrong. She is the embodiment of maternal affection for the Lord, so in this regard, she is the foremost authority on parenting. By taking up devotional service in the manner that it was practiced by the great devotees of the past, we can acquire all the knowledge essential to our tasks at hand. If we take care of Krishna, Krishna will take care of us.