“No faults were noticed on his mouth, eyes, forehead, eyebrows, or other parts of his face. Indeed in all parts of his body, not even the slightest fault could be detected.” (Lord Rama speaking to Lakshmana about Hanuman, Valmiki Ramayana, Kishkindha Kand, 3.30)

The practice of correctly identifying the truthfulness of the statements put forth by others is certainly an art form. The CIA, the Central Intelligence Agency of the United States, employs polygraph tests when conducting background checks for prospective employees. While the results of these examinations, which are commonly referred to as Lie Detector Tests, are inadmissible in court, intelligence agencies believe they have some validity. Sometimes people just aren’t truthful with us, and in order to tell the liars from the honest citizens, more scientific methods of review are required. When it comes to spiritual life, the Lord will often conduct this review Himself to be able to tell whether a person is heartfelt in their expressed sentiments. The truly pious never falter or waver when offering praise to the Lord, thus proving that their sentiments are genuine. This was the case when one of the most famous devotees in history, Shri Hanuman, met his object of worship, Lord Rama.

The stereotypical car salesman is very good at what he does. The effectiveness of his pitch lies in his ability to lie. He can tell a lie straight to your face without missing a beat. He can talk you into buying a car that you may not have even wanted, for a price that you may not have been willing to pay. While car salesmen are good at lying, most people understand that they aren’t really pious characters. Car buyers know what they are getting into, so they inherently understand that car salesmen have to be good at lying to do what they do. But in other areas of life, telling if a person is honest or not is a difficult thing. Honesty is important because it serves as the bedrock of a properly functioning society. Honesty conveys respect for other people and their property. A person who is dishonest has no problems with lying, which means that they are more likely to steal and perform other acts which violate the law. A government exists primarily to protect property and life, so if cheaters are allowed to run rampant, the entire fabric of society becomes torn.

Employing a few age-old tricks can help us tell whether or not someone is lying to us. The signs of dishonesty are most prominently exhibited during personal interactions. While a person is talking to us, if they make a sudden gesture with their hand, or if they start twitching, or if they don’t look us in the eye, it is likely that they are lying to us. Sudden perspiration is another sign of dishonesty. The famous television sitcom Seinfeld had a humorous episode relating to this situation. One of the main characters on the show, George Costanza, was working for the New York Yankees baseball organization at the time. In this particular episode, Costanza is called into a meeting with other employees to talk about the recent theft of office supplies. During the meeting, George is eating Kung Pao Chicken, a dish which is known for being spicy. As the leader of the meeting continues to stress the importance of catching the thief, George breaks out into a sweat due to the chicken. His boss, however, thinks that George is sweating because he is the one who stole the equipment. The boss immediately calls out George as the thief.

Why do strange bodily movements signal dishonesty? For most people, lying is not a comfortable activity. It’s much easier to be honest because it doesn’t require any effort. In fact, one of the best ways to cheat a polygraph test is to somehow make yourself believe that the lie is the truth. There is a famous saying that relates to how liars lie so much that they eventually believe themselves. This fact helps explain why an honest person has trouble lying and why they make involuntary bodily motions when going through with their lies.

A long long time ago, there took place a meeting between a pure soul, a great devotee of God who was in the form of a monkey, and his loveable object. This devotee’s name was Lord Hanuman, and his devotion was to a particular form of the Supreme Lord known as Rama. Followers of the Vedic tradition are quite familiar with Hanuman and Rama, for they are both worshiped by millions around the world. Hanuman is the embodiment of strength, courage, and most of all, devotion to God. Rama is the object of that devotion, a particular form of God who is known for being pious, kind, chivalrous, and extremely benevolent to His devotees. Rama is usually worshiped with His closest associates: His wife Sita Devi, younger brother Lakshmana, and pure devotee Hanuman. 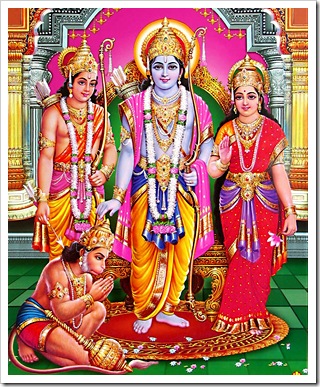 The forms of Rama and Hanuman weren’t just concocted by someone’s brain. The two figures are eternally living forms who actually appeared on this earth many thousands of years ago and enacted wonderful pastimes. Even though Hanuman was always a pious soul, he didn’t know of his devotion to Rama until he finally met Him. A detailed description of this meeting is found in the original Ramayana composed by Maharishi Valmiki. Lord Rama is an incarnation of God, so He can never take birth or die. When incarnations, or avataras, come to earth, their births are referred to as appearances. Similarly, when they go back to the spiritual world, their departures are known as disappearances.

Lord Rama appeared during the Treta Yuga, the second time period of creation. The Treta Yuga is noteworthy because it was during this time that mankind’s piety started to dwindle. In the first Yuga, Satya, almost everyone was a pure, devoted soul. Hence there was only one class of men, the brahmanas. Brahmana means one who knows Brahman, but we can take brahmanas to be priests in today’s parlance. One can imagine how nice society was when everyone was a brahmana. With the start of the Treta Yuga came a division in society. The kshatriyas were born, and since they weren’t as pure as the brahmanas, they were given duties aside from spiritual activities. The kshatriyas’ duty was to protect the citizens. This protection was now required since not everyone was a pious soul. The kshatriyas came into existence through two distinct families: one coming from the sun-god and the other from the moon-god. Lord Rama appeared in the Ikshvaku dynasty, which was part of the solar dynasty.

Though Lord Rama appeared in a kshatriya family and carried out the duties of His order, He was still the same Supreme Personality of Godhead. God is never beholden to any laws of society, even though He sometimes kindly agrees to abide by them. Since Rama wanted to maintain the good reputation of the Ikshvaku dynasty, He acted very piously. As part of His pastimes, He roamed the forests of India and visited the great sages living there. Unfortunately, one day His wife, Sita Devi, was kidnapped through a ruse set up by a Rakshasa demon named Ravana. Rama and His younger brother Lakshmana subsequently went searching for Sita’s whereabouts.

Their search eventually brought them to the Kishkindha forest. At the time, this forest was inhabited by a race of human-like monkeys known as Vanaras. One Vanara in particular had sought refuge in Kishkindha. His name was Sugriva, and he had fled to Kishkindha to escape the wrath of his brother Vali. The two were involved in a dispute, with Vali wanting to kill Sugriva. Luckily, Vali was not allowed to enter Kishkindha due to a curse imposed by a sage. Thus Sugriva was living a life of fear, even though he was completely safe in his surroundings. Sugriva spotted Rama and Lakshmana entering the forest, and thinking that they might be messengers of Vali, he sent his chief minister, Hanuman, down to greet them. Hanuman was given explicit instructions: “Find out what the two princes want. Approach them in disguise and don’t let them know who you are or who I am until you find out their purpose.”

Hanuman gladly obliged, descending from Mount Rishyamukha to meet Rama and Lakshmana. Even though Hanuman was hiding his real form by taking to the guise of a mendicant, he still couldn’t help but praise Rama and Lakshmana. Hanuman immediately went into a very eloquent speech, detailing the beautiful features of the two princes. He kept going and going with his kind words until he finally revealed who he was. He told Rama and Lakshmana his name and why he had been sent down. Lord Rama was very impressed by Hanuman. Rama was also glad to hear that Hanuman was sent by Sugriva, a king that the Lord had previously been advised to create an alliance with since he would help them find Sita.

Since Hanuman was Sugriva’s representative, Lord Rama didn’t respond to him directly. Rather, He appointed Lakshmana as His representative. Lakshmana was advised to kindly welcome Hanuman and to let him know that Rama was interested in making friends with Sugriva. Rama and Lakshmana were very close, so the Lord didn’t want to just tell Lakshmana what to do without giving some justification. In the above referenced statement, Rama is explaining to Lakshmana that Hanuman is certainly a sincere soul and that they have nothing to fear from him. Rama was impressed by Hanuman’s use of Sanskrit grammar and his flawless speech.

We also see that Rama could not find any deformities or defects on the face of Hanuman while he was giving his speech. This indicated that Hanuman was sincere in his words. Obviously honesty was at issue from the beginning since Hanuman had first assumed the guise of a mendicant and then changed back to his original form. If he had already tried to fool them with his appearance, why wouldn’t he have done the same with his words? To allay any fears that Lakshmana may have had, Rama pointed out that Hanuman did not show any signs of dishonesty. There was no reason to think that he wasn’t a pure devotee.

Just as Hanuman continued extolling the virtues of Rama without stop, one can go on and on describing the glories of Hanuman. Though he has the form of a forest animal, a lowly monkey, he is the most exalted devotee of Lord Rama. This shows that any person is eligible to receive the Lord’s mercy, regardless of their gender, caste, color, or nationality. Moreover, Hanuman is an object of worship, for as Goswami Tulsidas so accurately points out, he is the gatekeeper to Lord Rama’s kingdom. Since Hanuman is an authority on devotional service, one can never go wrong seeking his blessings and propitiating him with kind words.

Lord Rama, the ultimate truth detector, could tell what was in Hanuman’s heart. After this initial meeting, the two would go on to form a friendship that exists to this very day. In a similar manner, we should take up devotional service and try to offer kind words to the Lord. He will be able to judge whether or not we are sincere, so the more we purify ourselves through activities like chanting, reading, eating prasadam, and offering prayers, the closer we’ll come to loving God in an honest manner.