Index of the Mind

“Abandoning his beggar form and reassuming his monkey form, the elephant among monkeys [Hanuman] placed those two heroes on his back and departed.” (Valmiki Ramayana, Kishkindha Kand, 4.34)

This passage describes one of the most glorious scenes in history. One can meditate on this one picture for an entire lifetime and still continue to derive fresh and new enjoyment from it; such is the nature of spiritual life, the interaction between the Exalted and His loving associates. Just as families are the bedrock of a peaceful and happy society, so the spiritual world is full of families consisting of the most exalted personalities, role models for all of mankind. Of all the exalted spiritual figures, hardly any can rival the valor, strength, humility, and kindness of Shri Hanuman, a fact firmly supported through this one incident.

“Don’t talk to strangers” is what our parents told us when we were youths. This is sound advice because you never know what an unknown person wants or what their motives are in approaching you. In a free society, people are allowed to go about their own business with the reasonable expectation of being left alone should they abide by the laws of the state. If a stranger should approach us, naturally there will be some trepidation, some skepticism. “Why is this person talking to me? Are they trying to sell me something? Surely they must have other motives.” Even the most trusting among us would be a little on guard when approached by an unknown person. Yet one stranger in particular is so exalted and kindhearted that simply through a short meeting with him, others are enchanted and pleased to the heart. This individual is Shri Hanuman, an elephant among monkeys, the most powerful of the Vanara race, and an eternal servant of Shri Rama.

Many thousands of years ago, the Supreme Absolute Truth, the Personality of Godhead in human form, Lord Rama, roamed the hallowed earth alongside His younger brother Lakshmana. Both were members of the royal order, expert fighters who wielded the bow and arrow. Their fighting prowess was unmatched; not even thousands of the highest trained fighters could even come close to giving them a contest in battle. In sports, the greatness of a player is often determined by how far they surpass their peers in achievements. Wayne Gretzky is considered the greatest hockey player of all time since he shattered all the existing offensive records of his time. During his prime, he would tally goals and assist numbers that would dwarf the leading scorers of the league. By the same token, Rama and Lakshmana were so skilled at fighting that even the highest class of fighters couldn’t come close to agitating them.

These two brothers, incarnations of the original Divine Being, roamed the forests of India in search of Rama’s beloved wife, Sita Devi. Their search brought them to the forest of Kishkindha, which was inhabited by a race of monkeys headed by their king Sugriva. Seeing Rama and Lakshmana approaching from his perch on Mount Rishyamukha, Sugriva became fearful. The two princes were pillars of strength and their appearance showed this. Sugriva thought that maybe they had come to kill him, so to allay his fears, he sent his chief minister, Hanuman, to meet with the two princes and see what they wanted. Hanuman, though a Vanara, could assume any shape at will. Similar to the concept of putting on a disguise, Hanuman could make himself appear like a brahmana, or mendicant. He did just that when approaching Rama and Lakshmana. The two princes were part of the kshatriya order, a class of men which provides protection at the advice and consent of the intelligentsia, the brahmanas. Hanuman thought that by seeing a brahmana approaching, Rama and Lakshmana would surely let their guard down. This is precisely what occurred.

“Glaring with the effulgence of the king of mountains, you two brothers look like demigods or those who belong in a kingdom, so how have you arrived in this countryside?” (Hanuman speaking to Rama and Lakshmana, Valmiki Ramayana, Kishkindha Kand, 3.11)

Hanuman’s task was to find out what the princes were doing in Kishkindha, but since he was a pure devotee at heart, he couldn’t help but offer kind words of praise. On the fly, without even thinking, Hanuman was able to compose beautiful Sanskrit poetry which eulogized both Rama and Lakshmana. If a stranger were to come up to us and offer kind words of praise, we might not take them seriously since their kind words might be part of their pitch to sell us something. Yet Hanuman’s words were so cogent, heartfelt, and sweet-sounding that Rama was immediately pleased by them. He instructed Lakshmana to make friends with Hanuman and reveal their purpose for being in the woods.

Upon hearing of Sita’s kidnap and Rama’s search for her, Hanuman was delighted, for he knew that Sugriva could help the brothers find Sita. Giving up his false guise, Hanuman assumed his monkey shape and put the two brothers on his shoulders. Sugriva was staying on the Rishyamukha Mountain at the time, so Hanuman kindly leapt to the top of the mountain, taking Rama and Lakshmana with him. This sequence of events is equivalent to meeting a stranger on the road and then getting in the car with them. Yet Rama and Lakshmana didn’t hesitate at all, for they knew that Hanuman was incapable of lying to them.

Leaping your way to a mountaintop while carrying two grown men is no easy task. It takes great strength and coordination to pull this off. From this one incident, we get an idea of just how strong Hanuman is. Yet even with all his strength, he wasn’t haughty in the least bit. He kindly served Sugriva, Rama, and Lakshmana. Hanuman’s humility is one of his foremost characteristics. His true nature is that of a devotee. A bhakta, a sincere servant and lover, is one who devotes all thoughts, words, and deeds to a particular object or entity. A person can be a devotee of just about anything. Hanuman could have been devoted to so many things and people, but his overarching allegiance was to Rama. This love for the Supreme Lord existed inside of him even before meeting Rama and Lakshmana.

“After many births and deaths, he who is actually in knowledge surrenders unto Me, knowing Me to be the cause of all causes and all that is. Such a great soul is very rare.” (Lord Krishna, Bhagavad-gita, 7.19) 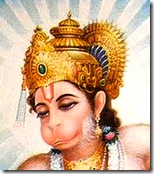 Devotion to Rama, the Supreme Lord, actually exists inside all of us; we are just currently unaware of it. It takes many lifetimes to rekindle this awareness, but for the exalted personalities, their consciousness of the Supreme is always there. As a result of this purified thinking, all subsequent activities follow in line with revealed knowledge and the established standards of decency and virtue. Hanuman can be thought of as an eternally liberated soul, one who has a pure heart and never deviates from the righteous path. The fire of devotion is raging inside Hanuman, and anyone who associates with him can’t help but notice this wonderful feature. It took Rama and Lakshmana a very short time to see this, and based on the course of future events, their assessment was completely accurate.

As a result of this alliance between Rama and Sugriva, Sita Devi was eventually rescued. Her captor Ravana was killed after a fierce battle. Hanuman played an integral role in these events, and so not surprisingly, he is worshiped to this day by millions around the world. He is an important character to study and learn from. As an authority figure on devotional service, Hanuman can share some of his devotion to other sincere souls who wish to associate with the Supreme Lord or one of His non-different forms. If we keep this one image of Hanuman carrying Rama and Lakshmana always in our minds, we will surely always be conscious of the Supreme Absolute Truth. This consciousness will keep us on the virtuous path, giving us the strength to fight off all bad elements in life. As a result of associating only with goodness, we too can slowly start to exude devotion to the Lord. There is a famous proverb which states that the face is the index of the mind, and in the case of devotees, their faces give away their ebullient love and devotion to God. This blissful effulgence is then noticed by others as well, including the Supreme Lord and His representatives. Being recognized in this way, a humble soul can directly offer service to Rama and Lakshmana in the same way that Hanuman did. Moreover, one can offer service to Hanuman, something which pleases Lord Rama even more than service to Him. May we always honor and remember Shri Hanuman, the king of all purified souls.