“From this spot I shall see Vaidehi, who is so desperately seeking the sight of Rama. Moving here and there, afflicted with grief, perhaps she will pass by this way.” (Hanuman, Valmiki Ramayana, Sundara Kand, 14.42)

Herein Shri Hanuman continues to rely on his high knowledge to succeed in a mission of intelligence gathering. Tasked with finding a missing princess who could be anywhere in the world, Hanuman’s radar was finally locked in on a target, getting ever so closer to reaching the final destination. This Ashoka grove must be the place where she was, for the entire land of Lanka had been searched already. The island was where an eagle, whose vision is impeccable from even long distances, had spotted her, so if the princess of Videha were still alive, she would likely be in this grove.

Valmiki’s Ramayana provides detail about the beauty of this park of trees that was situated near the head palace. The ruler of Lanka lived in the city, and therefore a network of buildings constituted the skyline of Lanka. As a dexterous and agile Vanara, Hanuman could leap from building to building and enter the tiniest of spaces also. Using a massive stature, he had crossed the ocean through the air, accepting the aid of the wind. But now Hanuman was back to a more natural habitat, a serene forest abounding with trees and flowers.

There were nice mountains in the background, and some of the trees had a golden hue. Hanuman picked one particular tree to act as his surveying perch. A hunch told him that this area was where the daughter of King Janaka would be moving about. In a swoon of devotional ecstasy, the lover separated from their beloved Supreme Lord looks for Him here and there. Many years into the future, the same Sita as Shrimati Radharani would wander in the Vrindavana forest looking for her beloved Shri Krishna, who would separate from her on a regular basis due to the situation at hand. Many thousands of years after that Lord Chaitanya Mahaprabhu would desperately seek out the same Krishna, following in the mood of Shrimati Radharani.

Hanuman knew that Sita would be in this mood because of her love for Rama. Her husband was the Supreme Lord Himself and His qualities endeared Him to His wife, who married Him in a grand ceremony in Janakpur. It is customary for a wife married under religious principles to devote herself to her husband, but in Sita’s case the devotion went well beyond protocol. She was attracted by her husband’s beauty, strength, charm, and overall kind nature. She genuinely enjoyed His company and she used the responsibilities of her position as an excuse to remain close to the person she loved the most. On one occasion Rama tried to keep her away, to go to the forest alone, but Sita convinced Him otherwise by invoking the rules and regulations stressed on the devoted wife in a marriage of the Vedic style.

“Whether it be residence on top of a palace, traveling on airplanes, or flying through the sky (via yogic powers), in all circumstances the shade of the husband’s feet is by far superior.” (Sita Devi speaking to Lord Rama, Valmiki Ramayana, Ayodhya Kand, 27.9)

Rama was ordered to leave His kingdom of Ayodhya for fourteen years, and He didn’t want Sita to suffer the pain of exile in the forest. But she would not live without Him, as royal opulence has no meaning to someone who has the true delight of their existence within their presence. What would valuable jewels and costly dresses mean to someone who lost the company of their beloved?

Unfortunately, Sita would have to feel the pain of separation later on, when Ravana forcefully took her back to his kingdom of Lanka and tried to make her his chief queen. She rebuked him in no uncertain terms and thus remained isolated in the Ashoka grove, left to wait for an uncertain future. Rama sent Hanuman to find her location first, and then He would march to Lanka with an army of Vanaras headed by Sugriva for the rescue.

In the above referenced verse from the Ramayana we see that Hanuman has accurately predicted Sita’s mindset at the time. She would be desperately seeking the vision of Rama. After all, who wouldn’t want to see the most beautiful person in the world after having spent so much time in their presence? The aim of life is not to just see God one time and then move on. The spiritual senses can never be satisfied, and that is not a bad thing. The material senses are likened to fangs belonging to a serpent, and so they constantly cause pain no matter how much you try to satisfy them. If you scratch that itch for sex life, you will crave it even more the next time. In addition, your threshold for satisfaction will increase, leading you to do things you otherwise wouldn’t.

With the spiritual senses, scratching the itch is beneficial because in seeking out the company of the divine, renunciation from the harmful material senses automatically takes place. The serpent that is the material senses in effect loses its fangs, allowing the individual to use their senses properly, purifying them so that they are guided in the proper direction. And the more you seek out God after having seen Him the better off you will be, as devotional ecstasy flows at its highest levels when in the mood of separation.

For this mood to bring the proper effect, there must be a strong hankering for reunion, which Hanuman knew existed in Sita. We are all separated from God in the conditioned state, but unless there is a desire to meet Him, devotional ecstasy will not come. The seed of the creeper of devotional service, which gives birth to the initial hankering for the association of Bhagavan, comes from the devotee, the spiritual master who is himself a servant. Therefore communion with the saints is one of life’s most valuable treasures.

Hanuman had already met Rama and had a similar hankering in his mind. Yet Rama, through the Vanara leader Sugriva, ordered him to leave Kishkindha to carry out some business. That order would be a blessing for Hanuman, as he would get to see Sita in the highest state of devotional ecstasy. Even the liberated souls take pleasure in seeing other liberated souls, so splendid is the influence of devotional service on the living entity. Just thinking of Sita thinking of Rama brought so much pleasure to Hanuman, whose determination was strengthened in the process. 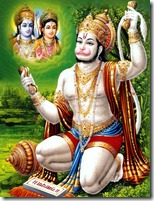 Hanuman guessed that Sita would be moving here and there. By staying in that tree, Hanuman could likely see her passing by. In meeting Hanuman, Sita wouldn’t get to see Rama, but she would get to hear about Him. With God, hearing is the same as seeing. Hearing might be more effective, as the sound vibrations describing and praising the Supreme Personality have a lasting influence on the consciousness. Vision is more susceptible to defects and vulnerable to distractions, whereas sound has the ability to resonate better within the mind.

Hearing about Hanuman waiting to see Sita, who was waiting to hear about her husband Rama, brings delight to the soul separated from God. Thinking about the goddess of fortune, Shri Rama’s eternal consort, was the right way to prepare for eventually seeing and meeting her. His intuition guided him to the right place, where he would know just what to say to the troubled wife of the son of the King of Ayodhya.

But her distress at the time no one could guess.

The company of her husband she would seek,

So from that perch Hanuman likely to get peek.

For that fateful meeting Ramadutta did prepare,

Thinking of Rama’s beloved, she of beauty so rare.

And give Hanuman of Rama’s love a chance to talk.

A blessing to cherish is with saints communion,

Paves the way for with God a reunion.