“Looking at Rama and Lakshmana’s beauty, the people of the city became so happy. From love their hearts are filled with bliss, eyes with tears, and bodies with excitement.” (Janaki Mangala, 55)

The vision of the transcendental body of the Supreme Personality of Godhead has an enchanting effect on others. The same potency exists in the Lord’s immediate expansion, His number one servant. This notable pair was seated on thrones in the kingdom of Janakpur at an assembly many thousands of years ago. Some were far away and others closer, but because of their internal clarity of vision, the observers showed symptoms that can only come from seeing God and recognizing His transcendental features.

Is it possible to see the original creator and have an improper reaction? Think of it another way. Is it possible to look at something and not recognize it for what it is? This already takes place with theatre and drama. If you turn on the television and flip to a channel that is showing a movie, depending on the position in the story, from watching the present scene you may or may not know what is going on. If it is at the end and you haven’t seen the movie before, there may be no reaction at all. But consider this: if you watch the movie from the beginning, that identical scene, viewed with the exact same set of eyes, can bring tears to your eyes. Or it can make you extremely happy and thrilled throughout the body.

If you’re looking at a painting and not wearing your glasses, you may not appreciate all the intricacies of the piece. If you’re driving and your vision is obstructed by the setting sun or the headlights of oncoming traffic, you may not notice the street signs that you need for guidance. Your eyes in these instances are the same, but there are distractions that lead to a different effect when viewing.

The people in Janakpur were not meditational yogis, experts on theology, or first-class teachers. The majority of them were simple townspeople, who lived their lives according to the standard set by their leader, King Janaka. Whatever a great man does, others will follow. This fact is confirmed in the Bhagavad-gita, the guidebook of guidebooks. King Janaka followed righteousness so closely that he even held a ceremony to give away the daughter he didn’t want to part with. Her qualities were so extraordinary that there wasn’t a prince in the world worthy of her hand in marriage. At least this is how Janaka felt.

To see if he could find a worthy match, Janaka decided to hold a contest, where the first person to lift Lord Shiva’s bow would win his daughter’s hand in marriage. Janaka would find the ideal match, but ironically enough it wouldn’t come from the invited guests. Instead, the prince was a sort of standby passenger, admitted entry at the last second because of the people He knew. Vishvamitra Muni, as a recognized spiritual leader, led two sons of King Dasharatha to Janaka’s kingdom after they had successfully defended the sages residing in the forests from the attacks of wicked night-rangers. 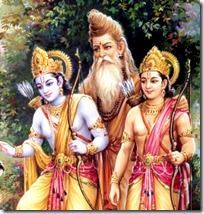 Janaka, as he was known to do, welcomed brahmanas to his kingdom. Vishvamitra was treated like an honored guest, and so were his escorts, Rama and Lakshmana. But these were no ordinary boys. They had just defeated the staunch enemies of the demigods. Their ability to protect was so great that Vishvamitra used them for protection. If Rama and Lakshmana could protect the priestly class from wicked creatures who could change shapes at will and use illusion to kill their enemies, then surely the boys could protect a king’s daughter.

The family ancestry of the boys was perfect, and so were their bodily features. Given thrones to sit on, Rama and Lakshmana glowed in the assembly. The townspeople could not take their eyes off of them. In the above referenced verse from the Janaki Mangala, the people of the town became happy at seeing the beauty of the two boys. Depending on the object viewed, sometimes beauty can lead to unhappiness. If it belongs to a member of the opposite sex who is already committed to a spouse, that beauty only causes pain, for you know that you can’t go beyond external viewing.

Rama and Lakshmana’s appearance brought happiness because that is the natural effect that God and His personal expansions have on kind-hearted people. The deity and the picture representations of the Supreme Lord are beautiful and awe-inspiring for a reason. Their transcendental features are not ordinary. Show a young child a picture of Lord Rama and they will instinctively know that the image depicts something divine. They know that it is different from an ordinary picture.

Rama and Lakshmana’s divinity is revealed in the sacred Ramayana and many other Vedic texts. Their status is also confirmed in the reactions aroused in onlookers. The onlookers felt bliss in their hearts. Ananda, or bliss, is the reason for living. It is the only thing that gives life meaning. Without bliss in the heart, what is the point to working so hard day after day for so many years of your adult life? What is the point to getting out of bed in the morning if you can’t find bliss?

And know for certain that the bliss the heart desires exists. It is not a myth. It was taken from the vision of Rama and Lakshmana, and the people kept it with them. They received the fruit of their existence just through sight, without any other method of implementation. Life’s meaning is revealed to those who apply the right attitude towards the Supreme Lord and His servants.

The eyes of the onlookers filled with tears. This can only happen when viewing something extraordinary. The tears were a result of amazement as well. “How could two people be so beautiful? And they are so kind too. They protect the brahmanas, the people who practice religious principles and kindly disseminate Vedic wisdom to others.” The entire Ramayana poem of Valmiki brings such tears to the eyes simply through sound vibration. The qualities of Rama and Lakshmana are so extraordinary that the enemies of the saintly class try to discount them as made up or part of mythology because they can’t wrap their minds around them.

The bodies of the onlookers also filled with excitement, an emotion which goes hand-in-hand with anticipation. They saw the two beautiful boys and they immediately hoped that something good would come of it. Rama was the elder brother, so only He was eligible to marry Sita. They saw the beautiful vision and immediately became greedy. They wanted those youths to never leave their sight. They wanted Rama to win the contest and marry Sita.

These reactions were due to the love the people of the town felt. Nothing more than a glance at the two boys caused that love. The divine features elicit these reactions in sinless people, those who are not distracted by desires for personal gain. The aim of religious life is thus revealed in this verse. Follow the principles of bhakti-yoga, avoiding the most mentally distracting behaviors of meat eating, gambling, intoxication and illicit sex. And always chant the holy names, “Hare Krishna Hare Krishna, Krishna Krishna, Hare Hare, Hare Rama Hare Rama, Rama Rama, Hare Hare”. Soon thereafter, the same body that was previously distressed and fatigued from the daily grind will be filled with excitement over the prospect of seeing the Supreme Lord and serving Him without motivation and without interruption. That excitement was warranted on that day in Janakpur, when Rama would eventually step up and lift Mahadeva’s bow, fulfilling the destiny everyone was waiting for.

With bliss the hearts are then filled.

To love all of this is due,

This emotion only with God is seen,

Such as during contest in Janakpur scene.

Rama and Lakshmana to vow are true,

Protectors of sages and demigods too.

Love them with all your heart,

And happily this world you’ll depart.