Understanding In An Instant

“One may be a karmi, a jnani, a yogi and then a bhakta or prema-bhakta. But the ultimate stage of realization is prema-bhakti, as actually demonstrated by mother Yashoda.” (Shrila Prabhupada, Shrimad Bhagavatam, 10.8.45 Purport)

Amazing it is that mother Yashoda considered Krishna to be her own son, born of her womb and requiring her undivided attention. She knew that there was a God. In fact, just after seeing the universal form within the mouth of her beloved young child, she offered worship to that Supreme Lord. She relinquished her stresses relating to daily obligations and surrendered unto Him, knowing Him to be the presiding coordinator. Yet she nevertheless went back to loving her son, who is the same object of contemplation for those who study the three Vedas, the Upanishads, and sankhya philosophy.

Did the mother lose her mind? Could we use the excuse that because she was a woman, and therefore considered less intelligent, she considered He who is indescribable to be within her control? In this instance, Krishna was more than an innocent person resting on her lap. He required attention from the mother because His friends had just accused Him of eating dirt. Like the caretaker running to take out the splinter that accidentally goes into the finger, the mother took the matter of eating dirt very seriously. “Krishna should not be doing this. Why is He always getting into trouble? If He eats dirt, He will get hurt. Who knows what could be in that earth, as everything rolls over it throughout the day. The children walk upon it, as do the cows. Shards of glass could have fallen into it, or maybe even rocks. These don’t mix well in the stomach of a child. Therefore I must check on the situation immediately.”

Meanwhile, the person who studies the three Vedas, the original scriptures of the world, tries to wrap their brain around a person who is unbound and without a form. He has no hands, legs, eyes and ears, and yet He can move at the speed of the wind, lift a hill with His finger, see everything that’s going on and hear every single prayer offered to Him, regardless of the location. One person is praying in China while another in Canada, and though they may be praying at the same time, God still hears them both. Though He hears and understands both prayers, He is not a dual person. He is a singular entity, but He resides within everyone.

How is the mind to understand this? Thus one studies the Vedas, which give so many descriptions for the Supreme Lord. He is known as Krishna because He is all-attractive, but how can something without material hands and legs possess the quality of beauty? We don’t say that the air is beautiful today. We don’t say that silence has a pleasing sound. These objects are absent something. If Krishna is the most attractive, He must have a form, but then if He has body parts, are not they part of the illusory energy known as maya?

There are many other descriptions in the Vedas for the same person. He is Purushottama, or the supreme person. A person is an individual, an entity who thinks, feels and wills. An individual is also distinct from another individual. I can never be you and you can never be me. In the same way we can never be God, though we can be with Him. Krishna is also Rama, the giver of transcendental pleasure to others. He is Aja, or unborn, and Ajita, or unconquerable. He is undefeated in the true sense of the word.

Perhaps this study through names is too much to handle. Maybe there is a preference for in-depth philosophy or stories, real life examples that show how these attributes manifest. For this there are the Upanishads and the Puranas, supplements to the Vedas. These works have the highest philosophy known as Vedanta along with histories of events that took place on this planet and others. Still there are more works, such as the sankhya philosophy, which is commonly translated to mean metaphysics. Study the various elements and how they combine together to make the bodies we see around us. Also learn how the spirit soul, the infinitesimally small spiritual spark within these bodies composed of the various elements, is the director of action, how it is the indestructible force within every life form.

“Know that which pervades the entire body is indestructible. No one is able to destroy the imperishable soul.”  (Lord Krishna, Bhagavad-gita, 2.17)

Put all that effort, all that study, which requires constant attention and daily exercise of the mind, on one side and juxtapose it with mother Yashoda’s thinking. That same person whom the transcendentalists are trying to understand Yashoda took to be her son, her dependent. Shouldn’t she have abandoned this notion? Or perhaps this was her way of moving up the chain of thought? Mistakenly considering God Himself to be her helpless son would help her to develop detachment. She would acquire higher knowledge as a result and thus know the difference between spirit and matter?

Ah, but in actuality Yashoda was already in the superior position. How does this work exactly? From the Vedas we are taught to not be attached to family and friends, to rise above profit and loss and happiness and sadness. Yashoda had just felt a sort of pleasure in surrendering to the divine, leaving Him in charge of the important stuff. But Krishna quickly took away that vision and caused her to reassume her role of affectionate caretaker. This means that superior to the positions of jnana and vijnana is bhakti, or devotion. The aim of life is to have such a strong love for God that you can’t think of letting Him go for a second.

Of course we offer such kinds of service already, though to entities who are not God. The love is therefore checked and doesn’t always develop consciousness properly. On the other hand, the love for God automatically descends down for our benefit. If you love Krishna the way Yashoda did, you will automatically love His other children. Your own dependents are linked to Krishna in the same way that you are, so you share a common bond with them. With the devotional consciousness you are more aware of the proper duty in life and you will take the right steps to stay true to it.

By pleasing Krishna directly your other obligations fall into place. It doesn’t work the same way when the situation is reversed. In study of Vedanta philosophy, you may have to force renunciation upon yourself and devote time to understanding the highest truths. In the process, there is less time for others. You are more or less acting for yourself, trying to develop a higher understanding at the local level. But when your starting point is love for Krishna, the actions you take benefit others. By regularly chanting, “Hare Krishna Hare Krishna, Krishna Krishna, Hare Hare, Hare Rama Hare Rama, Rama Rama, Hare Hare”, others can hear the sounds of the holy name, which are non-different from the person they represent. They can see your example of devotional service and know that there is a higher point to reach in life. From bhakti-yoga the worker exercises their natural abilities in so many ways. The result is a potential for so much happiness, as so many plans can be made with respect to practicing bhakti. There is no monotony and others are free to join you in the devotion. 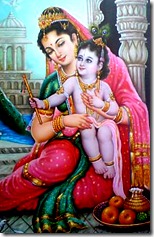 Mother Yashoda is an ideal role model in this regard. Though she may have wrongly considered Krishna to be her son, her love for Him benefited more than just herself. We are still talking about Yashoda to this day, so we know that there is something to be learned from her devotion. Moreover, Krishna was pleased by her work; otherwise He wouldn’t have agreed to appear in Vrindavana as her son. Nanda Maharaja got the credit for being a good father, and the community got the benefit of seeing Krishna all the time and delighting in His childish play. The cows received the benefit of seeing and feeling Krishna; they showed their delight by filling their milk bags with milk upon the sight of Yashoda’s delight.

Nanda and his wife had previously undergone many austerities to receive this special benediction. In this way we know that the study of Vedanta and the practice of religious principles lead to a higher stage. Krishna actually removed the veil of ignorance for Yashoda, as she had no desire for a steady philosophical understanding. It’s what you make of your understanding that counts. Think of it like having a law degree or a medical license. Unless you practice what you are certified in, your status doesn’t mean much. It is the exercise that makes the professional, and in the spiritual realm it is the output of devotional love that proves how intelligent you are. The previous study is meant to elevate you to that point, as through the many lifetimes in the material land forgetfulness of God’s true position is strengthened. Like untying a thick knot, the Vedas, the Upanishads, sankhya philosophy and other Vedic literatures represent tools to help you slowly awaken your original consciousness.

With bhakti, however, Krishna personally comes to slash away the knot of ignorance, immediately opening the door for transcendental pleasure that doesn’t have to end. Yashoda validated this with her daily concern for her son. From her exchanges with Him know that the person the mind is searching after is pleased most by devotion in utmost humility. Urgency in the practice of bhakti-yoga also leads to the benefit of the devotee, as their impatience makes them rush towards Krishna’s smiling face, which is the elixir to cure the burning fever of material existence.

Of Nanda and Yashoda’s delight.

The minds of devotees He instantly steals,

Pleasure from Yashoda’s love He feels.

For intellectual abilities to refine.

Though intense study and philosophy read,

For devotees such laborious effort no need.

Devotional service to Krishna is the final stage,

From her love, Yashoda wise as any sage.