“If even the respectable Sita, who is dear to Lakshmana’s elder brother, who was trained well by His superiors, can be struck by distress, then the influence of time is indeed insurmountable.” (Hanuman, Valmiki Ramayana, Sundara Kand, 16.3)

Herein Shri Hanuman establishes Sita’s spotless reputation based on a chain of respectability. From this comparison we also get a lesson on proper etiquette. To respect authority figures is beneficial in all areas of life, so it should make sense that in the pursuit for spiritual perfection, for real transcendence, one would need to approach a bona fide spiritual teacher and offer them the highest respect.

Humility is a noteworthy attribute because it is very easy to lose. When we accomplish a task through our own effort, we think that we are better than we actually are. Easily overlooked is the help of others and also the influence of the more powerful forces. As a simple example, planting a seed in the ground and then tending to the plant as it grows requires personal effort. However, from where did the elements required in this maintenance come? We need the sunlight, water, and the earth to harvest the fruit. No matter what effort we do or do not put in, these elements are not produced by us. We utilize them and take advantage of their properties, but never do we have control over how they operate.

The entire material creation has a superior influence over us, so humility is the wiser choice. In the Bhagavad-gita, Lord Krishna tells Arjuna that to learn about the Absolute Truth one should approach a spiritual master, someone who knows what they are talking about. The spiritual master is honored every year on the occasion of Vyasa Puja in the Vaishnava tradition because they are a representative of Vyasadeva, a famous spiritual teacher. Though Vyasadeva wrote more transcendental literature than anyone in history, his ego was not inflated. He is considered a partial incarnation of God, but he simply passed on the message of Vedanta that originates from God. Therefore what need did he have to feel puffed up?

Vyasadeva created a tradition of spiritual teaching that was passed on to his disciples. That chain continues to this day, and so anyone who is desirous of knowing the real truth – how to transcend birth and death and how to connect with God in a mood of love and not one borne out of fear – should approach someone belonging to this spiritual chain.

Humility should be the attitude throughout life, not something offered only to the spiritual master. In Sanskrit the word “guru” also means heavy, and it can refer to authority figures in general. The child’s first authority figures are the parents, and for the younger siblings it is the elder brother. For the wife it is the husband, the king the brahmana, the disciples the teacher, and so on. Respect in these instances is beneficial for both parties. The respectful child earns the protection of the parents, and the respected parents offer protection to the child. The respected elder brother leads the siblings, and the respected teacher shares the highest wisdom with the students.

In the above referenced verse from the Ramayana, Hanuman is describing Sita’s supreme standing by pointing to the people to whom she is connected. Sita is in a distressed condition, so Hanuman has deduced that the influence of destiny is insurmountable. No matter how pious or impious we may be, in the material world the dualities of pain and pleasure will always exist. No one can escape the influence of destiny, even if they are related to spotless characters.

Sita’s relation was not superficial either. I may be married to a wonderful woman, but if I am not faithful to her and if she doesn’t offer affection to me, the relationship is in name only. Hanuman describes Sita as being very dear to Rama. And who is Rama? He is the respected elder brother of Lakshmana. And who is Lakshmana? He is one of the sons of King Dasharatha, one of the most respected kings in the world. And why is that? Dasharatha protects the citizens of Ayodhya from enemy attack by showing his fighting prowess. And he also defers to the brahmanas, the spiritual teachers, on all important matters. And who are the brahmanas? They give deference to the Supreme Lord and His guidebook known as the Vedas. 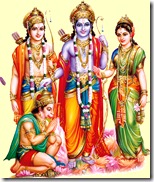 Rama is also described as being very respectful to His authority figures, being trained well by them. Rama is actually God, the same Krishna but in a different visible manifestation. Therefore no one is a higher authority figure than Rama, but to set the right example He offers respect to those who appear to be in higher positions. The point of all this is that Sita had done nothing to deserve her dreadful plight. She was in Lanka against her will, separated from her beloved. She was harassed day and night by female ogres, so it wasn’t as if she was living in peace.

As Hanuman is devoted to Sita, he belongs to the same chain of respectability. He showed his devotion by travelling to Lanka all alone, battling attacking ogres, and heroically reaching Sita to give the message sent to her by Rama. The Lord was coming to her rescue, provided that His camp find out where she was. Hanuman took care of that, and it wasn’t easy. Hanuman’s eyes overflowed with tears upon seeing Sita, bringing to mind the powerful influence of time.

Sita is a divine figure, so her suffering is not the same as ours. Time does not really affect her since she lives eternally with Rama in the spiritual sky, but the Ramayana and other sacred texts that document the Supreme Lord’s pastimes in this world teach us that permanence is found only in spirit and that the ideal home for spirit is God’s kingdom. Through the respectable Hanuman and his example, we learn that devotion in the proper mood of humility brings all good things.

To a worthy person respect give,

Who in humility towards superiors lives.

Until Supreme Lord you reach.

Then validity of members you’ll know,

That with thoughts of God they go.

Sita respected, and Shri Lakshmana too,

His brother Rama kind to parents and guru.

For life Hanuman is devoted to them,

His actions in Ramayana a precious gem.