“The scientists are eager to hear about the physical laws working in material nature. They are eager to hear through the medium of radio and television about things taking place far away from them on other planets, but they should know that the power of hearing and the instruments for hearing were given to them by the Lord for hearing about the Self, or about the Lord.” (Shrila Prabhupada, Shrimad Bhagavatam, 2.10.22 Purport)

The young child starts with the toy blocks. “Let me take these and see what I can make with them. Perhaps if I align them properly I can make a fake building. If I put the letters together in a certain way, I can make words.” As one gets older, the size and complexity of the blocks change. There is also reverse engineering, wherein one sees a finished product and takes to studying how the component parts work. Eventually, you get through enough areas of information that you take your curiosity beyond the planet. “Travel to where no man has gone before in the never-ending quest for knowledge.”

What’s missing in all of this, of course, is the inquisitiveness into why the component parts exist in the first place. For instance, as a physician, I know how different parts of the body operate. The tongue is used for taste. The stomach takes care of digestion. The heart pumps blood equally across the parts of the body that need it. The brain is the decision-maker. When there is a disease, one or more of these aspects cease to function properly. To learn to treat diseases is to find a way to make the parts function again.

The same pattern of discovery and study takes place with all aspects of nature. I know that the sun provides heat and light, so I find a way to optimize the sun’s output. If there is something prohibiting the sunlight from entering a necessary space, I find a way to remove the obstruction. Even the birds are wise in this area, as they know to fly south for the winter. They instinctively understand that they need heat to survive, and so they will go to wherever the sun’s influence is less inhibited.

But why does the sun exist? Why are there various body parts? Why do we have the ability to hear? Why does gravity exist? Why does disease befall us? Why does old age slowly creep in? Why can’t we forever remain twenty years old, with enough energy to do whatever we want? Why does space exist? Why can’t everyone live together happily?

These questions form the subject matter of the spiritual science. Generally, the unknown is relegated to the subject of religion. As religion is equated with faith, one person’s religion is as good as another’s. Even mental speculation is afforded a seat at the table of faiths. If my faith tells me that there is no God, then that is okay. If my faith tells me that such and such personality must be surrendered to in order to avoid eternal damnation in hell, so be it. If my faith tells me to expect miracles to enhance my fame and fortune, and that to pray for good outcomes is the reason to approach the higher power, then that’s perfectly fine.

In the Vedas, which many mistakenly put into the category of faith, there is no exact equivalent for the term “religion.” The closest match is “dharma.” There are different dharmas for achieving different results, but the highest result is attaining one’s constitutional position. Since that position is eternal, so is the corresponding dharma. Hence real religion is defined as sanatana-dharma, or the eternal occupation of man.

“Well, we know many servants right now. Actually, everyone is a servant. One person serves the customers at a restaurant, and another serves the board of directors of a publicly traded company, but both are still servants. So isn’t everyone already in tune with their essential characteristic?”

The fact that everyone shows the propensity to serve only confirms the claim that everyone has an essential characteristic that is to serve. The issue is that there is only one ideal service. All others are derivatives. Think of it like having a cheap imitation of a famous painting or having a pair of glasses which distort everything that you look at. The real dharma of the soul is to be a servant of the Supreme Soul. The soul identifies the individual, and that soul is eternal, blissful and full of knowledge. The Supreme Soul is the same in quality, but the magnitude of the aforementioned attributes is much greater. The striking difference in potency automatically yields the ideal relationship. The servant is the inferior who serves the superior. Whether the servant likes this or not, whether they agree or disagree, has no bearing on the truth.

When there is disagreement, there is residence in the material world. The many varieties of manifested objects that we see, including the many machines, exist to act as temporary objects to accept service. They are illusory forms meant to distract the individual from their ideal engagement, sanatana-dharma. The pursuit of knowledge of the various mechanical pieces is itself proof of this fact. Notice how the purpose to the solar system is not addressed in the scientific endeavors. Neither is there any curiosity into why there exists a feverish hankering for sex life.

In the unblemished spiritual science that is the Vedas, the purpose of the objects is revealed. There is duality in everything. We can say that the machine known as the body exists to allow an individual to serve other masters except God. We can also say that the same body can allow one to reawaken their dormant love for God, the Supreme Lord. The two paths don’t lead to the same destination. If you want to get to New York from Boston, you can’t take the train going to Chicago. The train to Chicago will not take you to New York, despite the fact that it is a train.

In the same way, if the body is used only for feeding the curiosity into the mechanical pieces of the universe, the future destination is the same universe. In fact, with this line there is no way out of the universe, even after repeated births and deaths. On the other hand, when the body is used for trying to understand God and one’s relationship to Him, one gets closer to release from the material world, which is a place where full knowledge is never possible.

The easiest way to use the body properly is to hear about the Supreme Soul. Hearing is already sacrificed for so many other things, but such hearing doesn’t lead to any tangible result. If I hear about how the body works, I can at best use my knowledge to heal the sick, which may include myself. In that occupation, I can earn a living to feed myself and my family. Yet the farmer has no knowledge of the body and they still eat. Those who have no knowledge of how the body works can also live for a very long time, without needing to consult a doctor. The mendicant who survives on the fruits that fall from the trees also eats just fine. Therefore the benefits from hearing in this case are limited, not getting you anywhere truly remarkable. 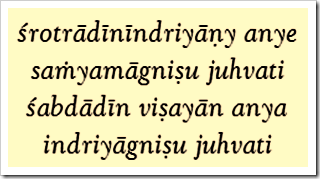 The same sacrifice for hearing topics relating to the Supreme Soul can get you knowledge of why you have ears in the first place. You can learn that as a spirit soul you have travelled through so many different species, having died in all of them. You ate, mated, and slept in those other species as well, so why should those again be the aim of this precious human form of life? You can learn that the real happiness you are after only comes through serving God, and through serving Him you automatically learn how to have compassion for your fellow man, giving them spiritual healing to truly save them.

Lest you think you will be bored in sacrificing hearing in this way, know that the Supreme Lord is ultimately personal. In His original feature He is known as Krishna, which means all-attractive. If you’re with someone who is all-attractive, you won’t need to go anywhere else for happiness. The liberated souls who bask in Krishna’s association have no burning desire for material knowledge. They choose only service to Him, which is an endless engagement that allows the tools originally given by Krishna Himself to be used properly.

Of the universe let me learn,

Trip to outer space to earn.

Of the sun, the moon and every star,

But why do such things in first place exist?

Why on sole perception of nature to persist?

Instead, from the Vedas and teachers hear,

Learn of Him whom the gopis hold so dear.

All-attractive is He, boredom never to the mind,

In sacrifice of hearing highest wisdom to find.