“When the car is ready, the driver sits in the car and moves it as he desires. This is also confirmed in the Bhagavad-gita (18.61): the living entity is as if seated on the machine of the body, and the car of the body is moving by the control of material nature, just as the railway trains are moving under the direction of the controller. The living entities, however, are not the bodies; they are separate from the cars of the body.” (Shrila Prabhupada, Shrimad Bhagavatam, 2.5.32 Purport)

On an episode of the popular comedy television series, The Big Bang Theory, the group of scientist friends made an experiment of being able to control a robot using computer commands. The robot could do basic things like pick up items out of a bag of takeout food and move here and there and use its arms. To the scientists, the experiment was really interesting; a breakthrough in intelligence in fact. To the audience there was still the joke that to do a simple thing with the robot required so many commands to be entered into the computer first. Nevertheless, the robot was eventually able to do what was asked. The parts were moving at the control of a more intelligent being, which actually shows us what is more important to study.

What do we mean by this? 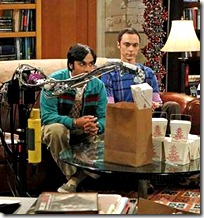 The robot moves and does things with its arms, but without a controller, the robot would be just an ordinary pile of metal that is uniquely constructed. It would be a work of art, meant to be viewed instead of utilized. The person who created the robot is more important. The person who controls it after its construction is just as important. Without such a guiding force, there is no importance to the parts. In the same way, the living entities consist of moving parts coupled with an intelligent guiding force. If you ignore the superior force, you are essentially wasting your time in the study.

Think of how much research is done into the parts. All of the daily stories in the newspapers about preventing this disease and that relate only to the parts. Controlling cholesterol means manipulating the part that is the arteries. These carry blood from the heart, which is an essential function. Without blood going to the other parts of the body, the heart would not be able to survive. Therefore ensuring that the arteries aren’t clogged up is very important.

Controlling the weight of the body is a way to manipulate the parts as a whole, shaping their appearance. Obesity is the condition where there is too much “stuff” in the body for it to handle, sort of like a bag that is about to break from being overloaded with items. With weight loss, you learn how to decrease the burden on the component parts, thus making life for the resident within the body more peaceful.

But what about the resident? Where is the curiosity into its origin, its properties, and its travels? Where did this resident come from? Was it just a random collision of other body parts that caused its birth? And at the time of death, it will cease to be?

From the Vedas we learn that the resident is eternal. It is blissful and knowledgeable as well. The fact that the resident remains the same despite whatever changes occur to the parts is one way to prove the eternality of the resident. The resident is the same when there are fully functioning parts during youth as when there are malfunctioning parts in old age. And the parts will indeed malfunction. Despite the best mechanic, a car will eventually drive its last mile. No matter how hard you try, you won’t be able to drive it another inch. In the same way, the car that is the body will eventually pass, while the resident will be left to look for a new car.

“We can’t see the resident. Therefore how can we study it? We can rely on your Vedas for scientific explanations of its properties, but what will that knowledge gain us? How can we be sure that the information is true anyway?”

For starters, sight isn’t the sole means for perception. I know pizza by its taste, a flower by its smell, and cotton by its touch. The living being announces its presence through five different sense objects. I know someone is home by hearing them; I don’t have to necessarily see them. The soul’s presence is indicated in the same way, as the soul is the identifying force within every living being. Though we can’t see the wind, we know that it exists based on its influence on other objects. Though we can’t see the individual soul, we know it is there based on the effect it has on the parts that make up the body.

We take information on faith all the time, so we can follow the same line with Vedic teachings relating to the soul. The soul is meant to serve the higher soul, who is described in different ways depending on time and circumstance. In His full feature, He is Bhagavan, or the Supreme Personality of Godhead. He is the origin of everything, the existence of existences. Just like the individual soul, He too can be studied. We can use any frame of reference to better understand Him. While we are individual souls, He is the Supreme Soul. He resides within everyone, while we only reside within ourselves. We have a temporary body that we foolishly choose to study instead of our true identity, while He has an eternal body that is non-different from Him. We need light in order to see, while He is self-effulgent. His realm doesn’t even require electricity.

“That abode of Mine is not illumined by the sun or moon, nor by electricity. One who reaches it never returns to this material world.” (Lord Krishna, Bhagavad-gita, 15.6)

Study of the soul is endless because study of the Supreme Soul is so. Knowing Him, one automatically knows the individual soul. And if you know the individual soul, you know all you need to know about the parts that make up the body. More than anything, those parts are to be used for serving the Supreme Soul. In any other endeavor, the parts will not be utilized properly. Exclusive study of the parts is itself a kind of misuse, a misguided attempt of the subtle part that is the mind. That same mind can be used to study the Supreme Soul through consultation of the Vedas. And through application of Vedic principles, the practical realization of both souls occurs, which allows for the greatest end to life.

Still alive when sitting around and lazy,

Why then focus on them and how they move,

All parts useless when occupier removed.

Its properties more important to know,

For such knowledge to Vedic literature go.

Learn that chief occupant the soul inside,

Supreme Soul also within to reside.

In yoga both souls eternally connect.