“The Lord says, patram pushpam phalam: He is ready to accept from the devotee any kind of offering, never mind what. Even a leaf, a flower, a bit of fruit, or a little water, which are all available in every part of the world, can be offered by any person, regardless of social position, and will be accepted if offered with love.” (Shrila Prabhupada, Bhagavad-gita, 9.2 Purport)

“Not surprisingly, in my youth I didn’t have much money. My parents didn’t believe in an allowance. Therefore whatever money I did get came only sporadically. Sometimes my dad would give me money to buy ice cream or something, and then he would let me keep the change. Sometimes I would get money as a gift for a birthday. Whenever it did arrive, I would spend it soon afterwards. I would buy toys. I would buy video games. In this way I gave my money for so many different things.

“In adulthood, I started earning money. Now I could buy pretty much whatever I wanted, within reason. I was never into fancy cars or expensive clothes, so those things that I actually wanted I was able to get. I spent money on eating again, but also on ties, shirts, pants and sneakers. I spent money on televisions, on television programming and on concert tickets. I gave my money to charity sometimes too, towards causes that others told me were important. I even gave money to politicians that I thought would make a difference.

“In all this giving, I failed to look towards the way of the Supreme Personality of Godhead. In reading books by His Divine Grace A.C. Bhaktivedanta Swami Prabhupada, I’ve come to learn that offering something as simple as a flower to the deity of the Supreme Lord in the temple can bring back way more rewards than anything else. Though I’ve offered so many things to so many people throughout my life, I still feel like something is missing.

“Though I never thought of it before, the logic behind the recommendation makes sense. In all the giving thus far, I got something in return. The return was something expected. Perhaps I got a little more satisfaction with some giving than others, but in the end the return was very limited. God is the source of everything. He is the original giver. When others say that God is mean because He has destroyed their home through a hurricane, they fail to mention that God gave them that home to begin with. He gives them the materials necessary to make it possible to be angry with Him. He gives the air that we breathe, the water that we drink, and the food that we eat, so who are we to be angry with Him?

“On the other side, if I were to simply offer Him something in full sincerity, why wouldn’t He accept it? Come to think of it, why wouldn’t He take the form of the deity too? I know that some spiritual leaders condemn this practice as mere idol worship, but if God is really everything, why wouldn’t He be the deity too? If He is a distinct personality to whom we can offer worship, why wouldn’t He have hands, legs, a face and an enchanting smile? If you don’t believe that this is His original form, then at least you would have to acknowledge that God can take this form if He so chooses. If we can change the shape of our bodies through intense exercise and rigorous dieting, why can’t the Supreme Lord take any shape at will? And then what is the harm in worshiping His preferred shape?

“Of course we don’t have to rely on speculation in this area. The Bhagavad-gita confirms that the Supreme is a person. There are some spiritualists who say that temple worship is unnecessary since God is everywhere, but if that is the case then what is the harm in offering a beautiful flower to the deity? Is that not better than offering gifts to others, which will take place regardless? No matter how old I am or where I live, I will continue to offer so many gifts, and since they are not offered to God these donations will not really get me or the recipients anywhere. 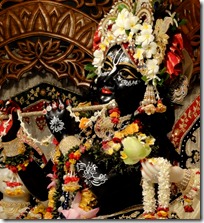 “From this day forward I vow to offer something to the Supreme Lord every day. I know that I am busy working and meeting the responsibilities of home and family, but at the very least I can contemplate offering a flower to God. Whether I have a little or a lot, I know that the best offering is the sincere chanting of the holy names: Hare Krishna Hare Krishna, Krishna Krishna, Hare Hare, Hare Rama Hare Rama, Rama Rama, Hare Hare. As this is the supreme gift for this age it is something I will continue to give until my very last breath.

“I should have been offering such attention with sincerity since the beginning of my life, but I know that I didn’t because of forgetfulness. From the Bhagavad-gita I learn that we are all forgetful of our true identity as soon as we take birth. Then the struggle begins to find our way, to make the right turns in this giant maze called life. If we fail to reach the proper destination by the time death arrives, we start over again in the next life.

“Bhakti-yoga is different from any other endeavor, though. If I only give and give for material purposes, I will have to start over with a clean slate in the next life. But if I give just one flower to Krishna, who is the all-attractive Supreme Lord, my progress will not be erased in the next life. Even if I fail to give to Him again, the progress I made will not go away. Thus there can be no denying the benefits of giving to the Supreme Lord, whose presence is spread throughout the world by His enlivened servants, who ask only that we give to God by chanting His names.”

Money in youth did not save,

Towards toys and games gave.

In adulthood on desires spent,

Towards clothes and food went.

From all this giving what did I get?

Still in transcendence mind not set.

To Krishna, temple’s resident so dear.

Return the best from this gift,

From darkness of ignorance to lift.