“After the muni reached Ayodhya, he took bath in the auspicious rivers. Shatananda achieved the fruit of reciting a billion holy names.” (Janaki Mangala, 116)

If you want to become a better runner, you should run on a regular basis. No big surprise there. If you want to cook something very nicely, you’ll need some practice. The first time you try it might get burned. Perhaps you’ll cook it for too long, you won’t mix it well enough, or you’ll forget a key ingredient. The ovens can vary, so whatever recipe you took, it might not be suited towards your situation one hundred percent. Practice makes perfect, especially if the practice is ideal. Therefore it shouldn’t surprise us that in order to increase our spiritual strength, practice of a particular method is recommended. That practice brings such a wonderful fruit as well. Whereas in ordinary strength training exercises, there is fatigue and vulnerability of burning out and having all the effort go to waste, such is not the case in the highest discipline of spirituality. 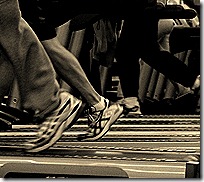 If my goal is to run a marathon and I currently don’t run at all, perhaps I’ll start off with running only one mile as my routine. The first day will be very difficult. I might be huffing and puffing my way through the exercise. The whole time I will be thinking of when it will be over. “I can’t wait until I get home. I’m going to sink into the couch and do nothing. From this day forward runners have my utmost respect. I don’t know how they can do this on a regular basis.”

The next day I will be very sore throughout my lower body. I will likely have trouble walking down the stairs. Nevertheless, through enough practice, things will get better. Pretty soon I won’t be so frantic while running. A single mile will seem as easy as taking a walk. My body won’t get fatigued so quickly, either. I will thus become stronger in a particular field through practice. The same holds true in other areas as well.

When we shift the focus to spiritual life, the obvious question is what goal we should try to achieve. In running, the end is pretty simple: work up to the point that you have enough endurance to run long distances. In basic exercise the point is to get a lean and fit body. In cooking the goal is to be able to prepare sumptuous dishes without worrying so much about ruining them.

In spiritual life, to know the proper aim one must first know who they are. One route towards answering this question is to go through every single spiritual book ever authored and see what you can decipher. Another is to accept the basic truth of achintya-bhedabheda-tattva so kindly presented by Chaitanya Mahaprabhu. He is a famous saint from India during the medieval period. He is believed to be non-different from God Himself. This fact is corroborated in sacred texts like the Mahabharata and Shrimad Bhagavatam.

Even if you are skeptical of the claims of His divinity, that doesn’t bar you from scientifically analyzing His philosophy. If you break down the words, you get a translation of “simultaneous oneness and difference, a relationship that is inconceivable to the mind.” As it is achintya, or inconceivable, you don’t need to wrack your brain trying to understand how it is true. It is better to just act off of the relationship, where the validation will come later on, as an eventual realization.

The oneness and difference is in comparing the individual’s identity to the higher power’s. The individual is spirit, or Brahman. The individual is not their temporary body. That means that while I’m in a human form right now, I won’t be forever. Previous to this life I was in a completely different body. After this life, I will be in a different body again. Throughout the shifts, my identity doesn’t change. The higher power is described as Parabrahman. Both His body and His spirit are changeless. He also expands to reside within every living being; thus He is all-pervading. He is simultaneously individual and collective.

From achintya-bhedabheda-tattva, we get the ideal relationship of servant to master. We are the servants and the higher power is the master. We can try to ignore this all we want, but it will only be to our detriment. Once we make the acknowledgement, however, our fortunes can turn around. The aim of the practice in the highest discipline of spirituality is thus twofold. First, one should truly accept the relationship of servant to master. After that, one should stay in that relationship, never breaking from it. This is for the benefit of the individual. All the rituals, regulations, funny dresses, odd-sounding chants, and places of pilgrimage are ultimately meant for bringing pleasure to the individual; there is no other purpose. 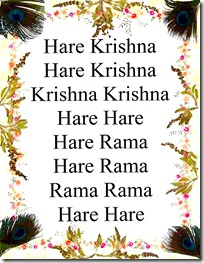 One of the best ways to serve the higher power is to constantly repeat His name. In an objective analysis, one would have to conclude that this is the superior method of all practices in spiritual life. That is because it can be practiced by any person, at any time and at any place. You are never precluded from chanting the holy names. Based on your country of origin, you may not be allowed in a specific temple. If you are not very intelligent, you won’t be able to understand the high philosophy that helps one to empirically come close to the conclusion nicely presented by Chaitanya Mahaprabhu. If you live in an oppressive regime where the government tries to play the role of God by handing out gifts to citizens by first confiscating wealth from the producers, you will have a hard time practicing spiritual life.

In any of these situations you can still chant the holy names. Which names should we chant? There are billions of names, too many to count really. This should make sense, because if the higher power is really supreme, His features would have to be unlimited. If there is no limit to His glories, there would be no limit to the number of names used to describe Him. Lord Chaitanya says that the best names are Krishna and Rama and that the energy of God should be addressed at the same time. For this reason He recommends the maha-mantra, “Hare Krishna Hare Krishna, Krishna Krishna, Hare Hare, Hare Rama Hare Rama, Rama Rama, Hare Hare,” as the best mantra to chant, the best way to realize the relationship to God and stay connected to Him in service.

In the Vedic tradition there are practices based on this chanting of the holy names. There are the thousand names of Lord Vishnu, which when chanted bring great auspiciousness. The result of saying any one of the names is an increase in spiritual strength, which is namely due to the potency of the name itself. The name is non-different from the person it addresses. This only works with God. Someone from thousands of miles away can call our name, but that doesn’t mean that we’ll rush to where they are. With God that is not the case. He immediately arrives when His name is chanted.

In the above referenced verse from the Janaki Mangala, the sage Shatananda has reached the city of Ayodhya, which at the time was the home of King Dasharatha. Dasharatha is the chosen father of Rama, who is an incarnation of God. Rama is one of the names in the maha-mantra, and it can refer to Rama, the son of Dasharatha, Rama, the elder brother of Shri Krishna, or just the Supreme Lord Himself, who is the source of all transcendental pleasure.

Shatananda went to Ayodhya to tell Dasharatha the news that his son Rama had won the bow contest in Janakpur and was thus slated to marry the daughter of King Janaka. We see that upon arrival the sage bathed in the holy rivers. In Ayodhya the holiest river is the Sarayu. By so doing, Shatananda received the fruit of chanting one billion holy names. One billion holy names obviously takes a while to recite, especially if one hears the names as they are recited. That chanting represents one billion steps taken towards the Supreme Lord; so the fruit is not chump change. The same was granted to Shatananda upon arriving in Ayodhya. This was due to the holiness of the city, which at the time was inhabited by pure devotees. All the residents there, including the king, lived the master-servant relationship with God. Though they may not have known that Rama was God, they nevertheless served Him. Even the father, though in an apparently superior position, was a great servant. To act as the Lord’s father during His pastimes on earth is a wonderful service, performed in the mood known as vatsalya-rasa, or parental affection.

The same fruit that Shatananda, Janaka’s family priest, received by arriving in Ayodhya and bathing in the rivers certainly comes to those who hear the accounts given by Goswami Tulsidas in his Janaki Mangala. The mood is especially what made the benediction come to the priest, as he was so happy travelling to Ayodhya to report on the festive occasion. Similarly, if one recites the holy names regularly with love and attention, they will get to be in the association of Rama’s closest devotees. Indeed, hearing from Tulsidas is just as good as being with him, and his association is just as good as being in Ayodhya during that sacred time.

Stranger wandering in a strange land,

How real identity to understand?

Inconceivable, better in it to live.

God is the master, we’re meant to serve,

Full of pleasure, our attention He deserves.

For with knowledge and association to be blessed.

From bathing after lotus feet in Ayodhya to set,

Shatananda fruit of one billion names said to get.

From poem of Tulsidas get reward the same,

His association and love for Rama easily gain.