When we say that someone has eyes for someone else, it means that they are attracted to that person. A symptom of that attraction is the behavior of their eyes: it will only focus on the object of attraction. In the case of the perfection of the energy of the Supreme Personality of Godhead, this phrase has both symbolic and literal meaning. It is symbolic in the sense that the energy is certainly attracted to the Supreme Lord, taking the utmost pleasure in seeing Him. It is literal in the sense that during the energy’s pastimes on earth in her original form, the first thing she saw was her beloved. She didn’t see anything else prior, so her vision was never tainted. On the occasion of Radhashtami we celebrate her wonderful sight, a sense which is dedicated exclusively to the Supreme Personality of Godhead.

“Hare Krishna Hare Krishna, Krishna Krishna, Hare Hare, Hare Rama Hare Rama, Rama Rama, Hare Hare,” is a mantra now famous throughout the world due to the tireless work of His Divine Grace A. C. Bhaktivedanta Swami Prabhupada and his many disciples. Taking the original Sanskrit definition, a mantra is a sequence of words to deliver the mind. To deliver implies that there is some danger. The mind is considered to be in perpetual danger when enveloped by maya. Maya is a Sanskrit word that can mean “that which is not.” It is actually just an energy, but based on how it is viewed it can create an illusion. 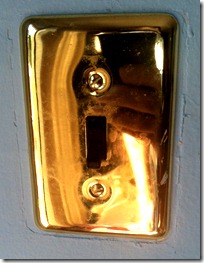 When the mind is suffering from the effects of maya, it needs to be rescued. Think of it like being stuck in a dark room and searching for the light switch. You have to be very careful in such a circumstance. If you walk too fast, you’ll likely bump into something. You could walk straight into a wall and cut your head open. So you keep your arms out, feeling for different objects, until you finally find the light switch. When the switch is flipped on, the light delivers you from the dangerous situation.

A mantra is like a light switch for the mind affected by maya. There are many mantras in the Vedas, the original scriptural tradition of India. There are different ailments that afflict the mind, and so many mantras exist to give aid. The aforementioned mantra is known as the maha-mantra, or the great sequence of words to deliver the mind. This mantra provides the best light, so to speak. It clears the mind of the illusion of false proprietorship over temporary objects. It clears up for the mind the doubt over the existence of a supreme controller. It allows the mind to know that there is both a Supreme Lord and an energy, and that both are meant to work together.

In the maha-mantra, the words Krishna and Rama address the Supreme Lord. They are two words to describe the same person. Another word for Krishna is Hari. And that which belongs to Hari is known as Hare. Hare is thus the energy of God; it is always with Him. We are part of the “Hare,” but we have a choice in how to act. Think of it like children who can either listen to the parents or ignore them. The Hare addressed in the maha-mantra is the purest form of that energy; it never thinks to deviate from devotional service, which is the highest occupational duty for all spirit souls.

Hare has eyes only for Hari. This is evidenced in her behavior. God is the masculine, and His supreme energy is the feminine. Indeed, in the grand scheme we are all feminine, though in the temporary body we think we are masters over the predominated material energy. We are really under the control of the divine, who is thus masculine. When the feminine always seeks to meet the interests of the masculine, and the masculine fully reciprocates that affection, there is oneness. Thus in this sense there is no difference between Hari and Hare.

Hari and Hare live in the transcendental abode known as Goloka Vrindavana. In that special land everyone is Krishna conscious. No one is deluded by maya. There is no need for deliverance of the mind, for the mind is always engaged in serving Krishna to some capacity. There is a replica of that Vrindavana in the earthly realm, and from time to time both the energetic and the energy descend to show their divine play. 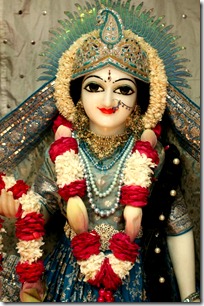 Hare appears in her original form of Shrimati Radharani. The exact sequence of events pertaining to her appearance and pastimes varies, since she appears in millennium after millennium. Space and time are continuous, so all manifestations go through cycles of creation and destruction. Both Hari and Hare appear over and over again, and sometimes they don’t always do everything in the same way.

Their most recent appearances took place some five thousand years ago in the Vrindavana of this land. Radharani appeared as the daughter of King Vrishabhanu and his wife Kirtida. Everyone was overjoyed when she was born, for she was amazingly beautiful. As was custom, so many great personalities came to the house to see her, wishing the parents well. There was one slight problem, though. Radharani had yet to open her eyes. The parents were afraid that she was blind.

One time they called over Nanda Maharaja and mother Yashoda, who were the parents of Shri Krishna, Radharani’s beloved. It is said that while the parents were talking in another room, Krishna crawled up to the bed on which Radharani was and touched her eyes. Upon this touch, she immediately opened her eyes. The first thing she saw was Krishna. Thus we know the real meaning behind her “eye problem”: she would not look at anything without first seeing Krishna. This is the mood of the pure devotee. They would rather be blind than be forced to see so many things that aren’t fully representative of their beloved Supreme Lord. In another version of the same event, Krishna and Radharani are both sitting on the lap of mother Yashoda. Krishna then touches her eyes and she opens them for the first time, seeing Him. 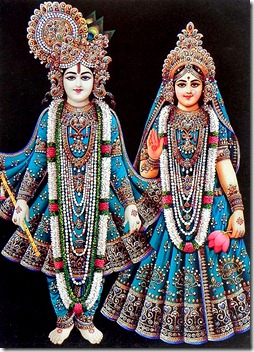 The conditioned souls have eyes for so many things. We love one person today, and the next our eye wanders elsewhere. Today we crave a certain food dish, and tomorrow we want something else. This constant change is guaranteed to continue for as long as one is in maya, for the very definition of maya is that which is not God. Of course everything is ultimately God, but the material energy is separated from Him. It is His energy, but the inferior variety. The eyes of the person who is pure in consciousness stay fixed on God once they find Him. On Radhashtami we celebrate the beloved of Shri Krishna. She is the queen of Goloka and has eyes only for the most attractive person in the world.

To not look elsewhere she chose,

That is until Yashoda’s boy came,

All-attractive, of Krishna the name.

Touched her eyes when upon bed to reach,

That eyes only for Krishna she did teach.

Name of beloved of Krishna we happily say.