“You will hear the twang of Rama’s bow, which is a loud sound resembling the resounding vibration of the thunderbolt thrown by Indra of one hundred sacrifices.” (Sita Devi speaking to Ravana, Valmiki Ramayana, Sundara Kand, 21.24-25)

In Vrindavana the sound of a flute gives away the presence of the Divine. When the young cowherd boys are playing on the field and losing themselves in their fun, the sound of the flute reminds them of their beloved friend. The cows are protected by the wielder of that flute, and so when they hear the sound they gather together and know where to go. The sound emanating from the flute extends the presence of the player, who happens to be the Lord of Vrindavana.

The material body is the same way. The construction takes place outside of the scope of our vision, but it still takes place. We don’t see the development of the embryo within the womb, but that doesn’t mean that it doesn’t happen. The spirit soul is the spark for that development. Without the presence of spirit, the development would never take place. Spirit has consciousness, while matter does not.

“The difference between matter and spirit is that matter has no consciousness like the living entity; therefore this consciousness is supreme and eternal. Consciousness cannot be produced by a combination of matter.” (Shrila Prabhupada, Bg. 10.22 Purport) 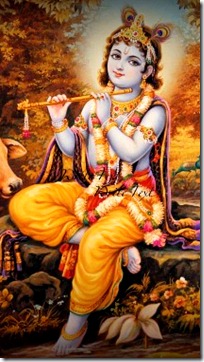 In the spiritual land there is no such progressive development and destruction because there the body and the soul are one. They are of the same quality. The many planets of the spiritual world feature different kinds of activity. The interaction is with the presiding deity in each particular land. Vrindavana is considered the topmost spiritual planet because it is the home of Shri Krishna. He is the original Personality of Godhead, the detail behind the abstract conception of a God. His name means “all-attractive,” and when considering all of His features this name fits Him perfectly.

Spirit and matter are identical in Vrindavana because it is so with Krishna. His eyes are the same as His identity. The sound from His flute is also identical to Him. Thus those who hear this sound know that they are in the presence of God. They require no other form of association, though they get it from time to time in seeing Krishna’s body, watching His play, and hearing His talking.

Though in the material land the body is like a building destined for destruction, the occupant can still get the same kind of association. The sound of the name of Krishna is the same as Krishna Himself. It carries the same potency as the sound of the Lord’s flute. Hearing it has the same effect as seeing the beautiful smile on Shyamasundara’s face. Reciting that name in the proper mood has the same blissful effect as going up to Krishna personally and saying nice things to Him.

The flute is an object of peace, and there are also other objects associated with God’s personal forms. They carry out different functions, but the wise see that they carry the same presence. In His incarnation as Rama, Krishna carries a powerful bow with accompanying arrows. These are weapons; they are meant for defense. If you juxtapose a flute with a bow, you’ll naturally think that the flute is the object of peace and the bow the object of war. In terms of God’s association, however, both are identical.

Rama’s bow makes a sound as well. It makes a twang when bent with an arrow drawn. The arrow is then released and seeks out its target like a missile. This arrow is only shot when needed. The arrow flies to protect the surrendered souls, those who only want to think of God in a peaceful mood. They want to always chant His holy names, “Hare Krishna Hare Krishna, Krishna Krishna, Hare Hare, Hare Rama Hare Rama, Rama Rama, Hare Hare,” remember His activities, glorify His associates, and practice devotion to Him. If any outside party should stand in the way, Rama will either send someone to help or come to the scene personally.

In the Treta Yuga, Rama shot His arrows many times to defend such innocent devotees. In the above referenced verse from the Ramayana, Sita Devi tells the greatest fiend that he will soon hear the sound of Rama’s bow. That will be a great sound, as loud as the sound made from the thunderbolt released by Indra. Indra is the king of heaven, and here he is addressed as the person of one hundred horse sacrifices. Sacrifice is an age-old practice common to all religions. The horse sacrifice in ancient times was said to bring great auspiciousness. The sound from Rama’s bow would be auspicious as well, though to the fiend in question it would spell doom.

Sita here is being held against her will in Lanka, the land ruled over at the time by a king named Ravana. She tried her best to appeal to the king’s sense of decency. She mentioned so many principles of morality and how Ravana should set a good example for the rest of the citizens. Then she mentioned Rama’s forgiving nature and how He is very affectionate to the surrendered souls. Here she mentions Rama’s strength. His force is so powerful that just the sound of His bow would instill fear in Ravana. That would be the sound of God. Though Ravana didn’t think that God existed, he would meet Him nonetheless. He wouldn’t have to see Him directly, either. Just the sound of Rama’s bow would be enough.

For Ravana that sound would spell doom, but for Sita it would be another sign of the aforementioned affection that Rama has for the surrendered souls. That sound has the same potency as the flute in Vrindavana, as it reminds the distressed and pleased alike that God is on the scene and ready to save the day.

Flute the sound of peace,

On God both are the same,

Destroy with a flight swift,

But for Sita life-saving gift.