“Each and every one of the living entities within this universe has this minute independence, but Brahma, being the chief of all living entities, has a greater potential of independence than any other. He is the representative of Krishna, the Supreme Personality of Godhead, and has been assigned to preside over universal affairs.” (Shrila Prabhupada, Shrimad Bhagavatam, 3.18.20 Purport)

When delving into the annals of the history of the world, the theme of “liberty versus tyranny” is peppered throughout. It’s a common story:  some government became too powerful and started to oppress its people. Those people then hoped for liberation, to be free from the iron fist of tyrannical rule. This theme is present in religious works as well, which often describe historical events from ancient times. Freedom is certainly what everyone desires, but actually that freedom is always checked. Moreover, the issue becomes how to make the best utilization of that freedom once it is gained. From the person who is the freest, who has the most ability in using their independence, we see what the best use of it is. 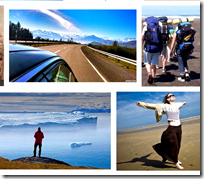 Imagine that you had no one telling you what to do. No nagging wife in the home. No domineering husband to check your behavior. No kids that warranted attention. No job denying you vacation time. You had the ability to do whatever you wanted, whenever you desired. What would you do? Would you take up a hobby? Would you travel the world? The travel option seems appealing. You could visit place after place, experiencing new things every day. Even without physically moving from their home, so many follow this path already. Television and film allow an individual to escape from their present surroundings, to be part of different settings. It is nice to go to a new place every now and then.

Though we may not know it, freedom is always checked, even after there is so called liberation. One nation goes to war with another and uses the justification of wanting to liberate the oppressed. “We must free the oppressed people. If our nation doesn’t do it, then who will? Who will come to their rescue? Man should not have to live under the rule of a dictator. Man should be free to choose his own destiny.”

But what happens after the liberation? Does strife suddenly vanish? Are there no arguments anymore? Is everyone fully content all the time? Actually, without knowing how to properly use that freedom, there will always be trouble. The person living in the purportedly free country has constant worries. They are concerned with the deteriorating conditions of the public schools. They walk around knowing that at any moment a medical catastrophe could leave them bankrupt. They worry over paying the credit card bills, the mortgage, and taxes.

This is not to mention the physical limitations every person has. We have some independence, but we can’t live forever. We can’t stay awake for an entire week. We can’t go without eating. We can’t keep the body from aging. Therefore our independence is very limited. The animals even have some independence, but their exercise of it is more limited. They cannot make as many conscious decisions as the human being can. The human being has more intelligence to use in how they will act.

From Vedic literature we learn of a character who is the most independent of the conditioned living entities. We also learn how he acts. This person is the creator of all creatures. Depending on your point of view, you will think that this person is God Himself or a series of chemicals that randomly collided. In either case, the original entity is understood to be very powerful. 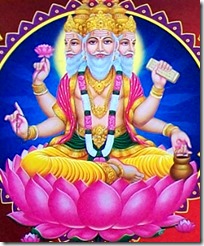 By approaching someone who has seen the truth, who is self-realized, we learn that the creator is godlike but not God Himself. He is known as Brahma by name, and his duration of life is very long. His one day consists of billions of years. As he has the power to create, his independence is as great as it can be. It is still not complete independence since he has to leave his body eventually, but from our perspective we could never imagine having that much independence.

From works like the Shrimad Bhagavatam, we can get an idea of how he uses that independence. On one occasion, he went to the place where a great fight was taking place. This conflict was between a powerful living entity named Hiranyaksha and a boar. Was this like watching a wrestling match on television? Was it like going to a sporting arena? Actually, the boar was the real attraction. He had a transcendental form and was previously engaged in holding up the earth from a flood. Hiranyaksha was the aggressor, desirous of battle against this boar who wasn’t bothering anyone.

Since this boar was an incarnation of the Supreme Personality of Godhead, it was beautiful in every way. A person looks their best when they are offering love to someone else. Here Varahadeva was loving His devotees by dealing with a shameless aggressor. Lord Brahma, the most independent living entity, decided to go to the scene to witness the event. No one told Brahma to go. He could have used his independence for vice, but he chose not to. He was quite selfish in this regard, as he knew that witnessing Varahadeva’s fight against Hiranyaksha would make him happiest. 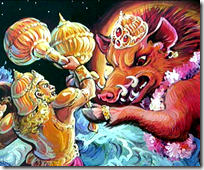 His choice is quite insightful. In the absence of God consciousness, the living entity looks for personal success, some kind of achievement in a material field. Be it the accumulation of wealth, the strengthening of the body, or the association of an attractive partner, the independence is used to reach a place where there is more happiness. Brahma is the most independent, and so he can do whatever he likes to be happy. He already has the greatest ability in populating the creation with creatures. Technically, he is already the most successful. He has no longing for anything. No one tells him what to do. Thus his use of independence is the model for the rest of the world.

His independence is used in voluntary surrender to the Supreme Lord. That surrender is in consciousness, where all actions are done out of love. He makes the choice to always serve the interests of the Supreme Lord, who reciprocates by displaying wonderful transcendental forms and activities for the pleasure of the surrendered souls. Dependence on God is the greatest use of any independence we have, as was shown by Brahma himself.

In independence to act I’m free,

In Brahma the proper use to see.

His creative powers make him foremost,

In actions he has freedom the most.

Went to watch demon most immoral,

Against boar an epic quarrel.