“Janaka embraced Janaki and instructed her on everything that needed to be instructed. Going to his ministers, guru, and relatives, he brought them to the farewell procession.” (Janaki Mangala, 170)

Janaka held affection for her when he first found her on that famous day in the field. He was looking to please God by holding a sacrifice. To that end, he had the field ploughed. To his surprise, God rewarded him with a brand new baby daughter. The Brahman-realized king momentarily fell from his position in dispassion by harboring so much paternal affection for this precious gem. But in fact he was actually rising to the platform of bhakti-yoga, where one is protected directly by the Supreme Lord.

Since He offers that protection, the Supreme Lord is described as bhakta-vatsala. Vatsala is the affection offered in the mood of devotional service known as vatsalya-rasa. Awe and reverence aren’t the only options for souls looking to connect with God. In the more intimate dealings, one can become God’s friend. They can become His lover, and they can also become His parent. 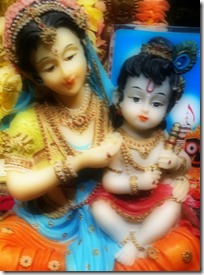 In the role of the parent, the affection offered is unique. The good parent always thinks about their child and how they will protect them. Instead of looking to take, they seek any opportunity to give. Even when the child is grown up and ready to enter the real world, the good parent never stops giving. They offer help in guiding the child through school and work. They offer care even when the child has children of their own. Whatever the situation, the mood of paternal affection remains.

In this scene from the Janaki Mangala, Janaka has his last opportunity for offering direct affection to his daughter Sita. She is married now, set to leave for her husband’s kingdom. He offers her good instruction, all done with love. He is Sita’s protector, though she is so powerful that she doesn’t require one. Just as one can become the father or mother of the Supreme Lord, the same opportunity is there for the Lord’s eternal consort.

Janaka was the protector of Sita while she was raised in his kingdom of Janakpur, and throughout his life Janaka was protected by the bhakta-vatsala, the Supreme Lord. In the Vedic scriptures God is not described to be the protector of the theoretician. He is not the supreme benefactor of the mental speculator. Nor does He explicitly protect the yogi, the kind who meditates. He is specifically affectionate towards the devoted souls, and His protection is offered with intelligence, even if it seems otherwise.

As Sita’s protector, Janaka provided a good home for her. He kept her safe and showed her the proper example to follow. Janaka’s protection was seen by the eyes, but what was more subtle was the protection offered by God Himself. He arranged to have Sita enter Janaka’s family. Through her presence, Janaka gained Rama as a son-in-law. Rama is the bhakta-vatsala in person. He gives a manifest version of the protection offered by God.

He cared for Janaka by maintaining the king’s vow. For Sita’s marriage, Janaka had decided on a contest. Upon seeing Rama, however, Janaka wanted Sita to get married to Him right away. That would have broken the rules of the contest, and so Rama protected everything by winning the contest Himself. He looked over Janaka’s fortunes, the same way that Janaka oversaw Sita’s protection from childhood until marriage.

The same affectionate hand is not offered to the yogi or the jnani because there is a vital desire inherently lacking in those pursuits. The jnani is after knowledge first, and the yogi after control of the senses. In bhakti, or devotion, one doesn’t have to be knowledgeable. One doesn’t even have to be very renounced. In bhakti, due to the efforts of the bhakta-vatsala, there is success under any circumstance. Whether one is literate or not, whether they can concentrate for hours on end or not, since they have devotion they can always love God. He specifically shows them the ways that are best suited for them. 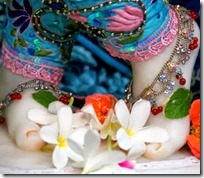 That bhakta-vatsala gives protection to any soul in the Kali-yuga in the form of the holy names. One need only regularly chant, “Hare Krishna Hare Krishna, Krishna Krishna, Hare Hare, Hare Rama Hare Rama, Rama Rama, Hare Hare,” with firm faith, conviction, and a desire to please the Lord, and the direct affection is guaranteed to come.

Supreme affection in his heart filled,

So proper values in Sita instilled.

One last time instruction to receive,

As for husband’s home now ready to leave.

King’s own efforts God to save.

Same affection for today’s souls is there,