Home › stories › The One With The Stage Fright

The One With The Stage Fright

“The bewildered spirit soul, under the influence of the three modes of material nature, thinks himself to be the doer of activities, which are in actuality carried out by nature.” (Lord Krishna, Bhagavad-gita, 3.27) 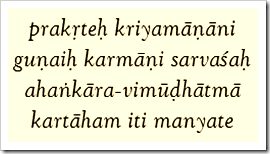 When he was in the fifth grade, Tim had one particular day in school that really surprised him. He experienced something very troubling and new to him, and he wouldn’t know what the exact problem was until many years later. One day his class was reading the famous novel called The Scarlet Letter. Tim was a fairly decent student, so reading or math assignments didn’t worry him. He would regularly complete them on time and get some of the highest marks in the class. 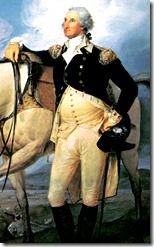 But on this day the class was going to read a chapter from the book out loud. And not just one student would be given the task. They would go around the room. One person would read a few paragraphs, and then the person next to them would continue. Up until this point in his life, Tim, who though being extremely shy, had no problem doing such things. He had acted in a school play a few years prior, playing the role of George Washington, which he enjoyed very much.

On this day, however, he felt extremely nervous. Tim’s heart seemed to stop as the task grew nearer. “Oh no, I’m so nervous,” he thought to himself. “I better read this well. I hope I don’t mess up any of the words.” It was now his good friend’s turn. He was seated next to Tim. After he finished the last word in the paragraph, it was Tim’s turn.

The whole class waited for him to go. They would have to keep waiting. No words came out of Tim’s mouth. “Just say it. What’s wrong with you? You can do this,” his mind kept saying. However, the nervousness was too great. He couldn’t even utter the first word. “I know if you get the first sentence out, the rest won’t be a problem,” were his mind’s words of encouragement. Yet nothing happened. The class started laughing. The teacher called his name a few more times, and still no words came from his mouth. Finally, they moved on to the next reader. 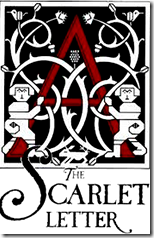 At the end of the class, Tim’s friends congratulated him on a joke well played. “That was funny, man,” they told him. “You just refused to read. Yeah, this book is pretty stupid. I didn’t want to read, either, but I don’t have the same courage as you.” Tim couldn’t believe it. Somehow they didn’t detect that he was nervous. They had no idea that he was simply unable to speak the words. “I’ve never had a problem like this in the past, so that’s probably why they had no idea,” he thought to himself.

As the children were filing out of the classroom at the end of the day, the teacher asked to speak with Tim.

“What happened during the reading today? Were you trying to play a joke?” asked the teacher.

“No. I’m sorry; the words just weren’t coming out of me.”

“I was so nervous. I’ve never had that happen to me.”

“Oh, okay. Just try to relax. Think about something else. I knew something was going on,” she said to him very calmly.

During the remaining years of his schooling, similar problems occurred, but not on a regular basis. In the seventh grade, the teacher had the students read a play in class. Tim was assigned a particular role, and when it came time for him to read, he once again couldn’t utter a word. The class laughed and assumed that he was remaining silent in protest of the role assigned to him. Once again, after class he had to explain to the teacher what had happened. She had a difficult time believing him, since he had not shown signs of nervousness previously.

Tim struggled with the problem his whole life, even into adulthood. Sometimes he would have trouble saying his name to someone when asked. He would sometimes freeze when speaking on the telephone to order food. He had developed little tricks here and there. He also learned that the problem he had was known as “stage fright,” which so many people suffered from, though not all to the same degree as Tim. 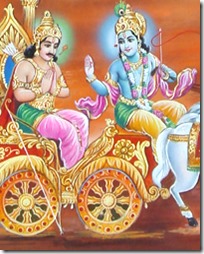 Not until reading the Bhagavad-gita in adulthood did Tim fully grasp the reason behind his problem. Tim developed a habit where he would read one verse from the book in the morning and then think about it for the rest of the day. In meditating on the verse which says that the living entity is not the doer, Tim couldn’t help but reflect on his problems over reading out loud in school.

“I think I understand this verse,” he thought to himself. “It’s like when I was in school. All I had to do was read words out loud. It wasn’t that hard of a task. In fact, it had never been a problem before. It was almost involuntary. But my mind got in the way. Though the mind told my tongue to vibrate words, nothing happened. This means that I am really not the doer, though I think I am. I can choose how to act, but the results come from material nature. That nature is controlled by God, who is superior to me. Without His sanction, nothing can happen.” 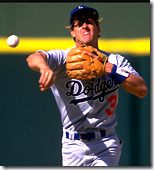 “So many others have similar problems, “ he continued thinking. “I grew up healthy, but some kids get diseases in their youth. This means that we’re not fully in control of our fate. We can try our best to stay healthy, but if nature doesn’t cooperate, nothing can be done. The same goes with stage fright. Some have it and some don’t. I know some baseball players even had it. They could make the throw from the second base position to first base without a problem for so many years. Then suddenly one day it became too difficult. Only when they were in emergency situations, like turning a double play, could they make the throw. That is because the mind got out of the way then. So even within the body, which we think we have control over, impediments exist towards reaching the desired result.” 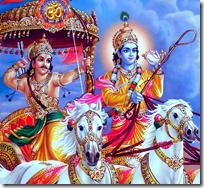 Tim considered that since the outcomes to actions are out of his control, he might as well desire outcomes that will please the controller. “Since God is ultimately in charge, I should try to act in ways to please Him. Then He will take charge of making the outcomes manifest. I will get the benefit, thinking myself the doer, when in fact He will be helping me out. Krishna teaches us that we are not the doer, that nature carries out the results to action. For the devoted soul, Krishna Himself takes charge, like He did with the great warrior Arjuna. Later in life, when Krishna had returned to His transcendental abode, the fighter of tremendous skills, Arjuna, met with defeat. He immediately realized that it was Krishna who had done all the work in the past, the work that made Arjuna famous. So from now on I will try my best to please the Lord by chanting His names, Hare Krishna Hare Krishna, Krishna Krishna, Hare Hare, Hare Rama Hare Rama, Rama Rama, Hare Hare, and following devotion to Him. Stage fright or not, I will not give up in this quest to please the beloved Lord of the universe.”

Think control of outcomes in you,

But actually nature is the one to do.

Or from disease to feel weak.

Fullest power in His hands holds.

Try then for in devotion to live,

Krishna success and credit to give.