Home › honesty › Your Silence For Your Confidence

Your Silence For Your Confidence

“Satyam, truthfulness, means that facts should be presented as they are for the benefit of others. Facts should not be misrepresented. According to social conventions, it is said that one can speak the truth only when it is palatable to others. But that is not truthfulness. The truth should be spoken in a straight and forward way, so that others will understand actually what the facts are.” (Shrila Prabhupada, Bhagavad-gita, 10.4-5 Purport)

Imagine this scenario. You’re working in the government. You hold a position in an important department. No one really knows who you are since you work on the staff for a leader who is known to the public. That leader works under the direction of the even bigger leader, the acknowledged head of state. Therefore you have some cover. You have some anonymity. You do important work, but no one bothers you.

One day you suspect corruption going on. You’re not sure. This is a big deal, you tell yourself. Therefore you’re not going to rush to judgment. You’re going to investigate further to find out what is really going on. After all, up until this point you trusted the leaders. You had no reason to suspect them of wrong doing.

To your dismay, the investigation only confirms your initial suspicion. There is indeed corruption. It traces all the way to the top, the head of state. You have a dilemma on your hands. You know that the right thing to do is to tell some person in authority of what is going on. This corruption should not stand. For starters, the people of the state have an incorrect opinion of the head. They think that he is honest and trustworthy. He constantly criticizes those who are corrupt in the private sector, such as the famed business leaders who jump ship and sell their stock the day before the company is about to announce bankruptcy. The leader talks a good game about being open with the citizens, but now you know that he is anything but honest.

If you go public, however, you will make a lot of enemies. You will likely lose your job. Everyone in the office will stop talking to you. As this is a pretty big scandal, the guilty party is not going to sit idly by. They are going to attack you, trying to ruin your reputation. These people who all love you presently will no longer even speak with you. Therefore the truth will make you a lonely person, whereas silence will buy you the confidence of others. What will you do?

The Vaishnava saints face a similar predicament. They see so much going on around them that is not right. Not merely from their knowledge of scripture and the consequences to actions slated for the afterlife, from experience these wise souls know that the best use of the auspicious human birth is devotional service, pure love for God. He may be called a specific name in a specific region, but this does not mean that He is exclusive to one group. And neither is devotional service reserved only for the group which presently knows God in His complete manifestation of the Supreme Personality of Godhead, who is all-attractive with His transcendental features. 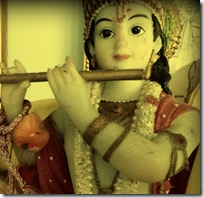 The Vaishnava sees the dangers of intoxication. They know that not only does the drug addict have a difficult road ahead of them but that also the casual drinker looking for an escape from their daily troubles would be better served in escaping in the right way, in a permanent fashion. That escape is from illusion into reality, from the temporary into the permanent. That escape is actually a rescue, and everyone is entitled to it.

The Vaishnava sees the dangers of illicit sex, where the deluded soul incorrectly worships body parts belonging to another. Identifying themselves and others with the visible manifestations of the various bodies, such souls do not see the future, where such body parts will no longer be attractive. They do not see that there is a higher pleasure available in attachment to the transcendental body of the Supreme Lord, whose form is worshiped in the purest way by offering prayers and chanting His names.

The Vaishnava sees the sinking pit of gambling, where one wager is never enough. One victory is not enough either, as without the rush of the next roll of the dice, one feels as if their life has no meaning. The Vaishnava knows that the best gamble is to bet on the mercy of the Supreme Lord. The roll of those dice comes up correct every time, as the soul who is pure in consciousness of God is guaranteed to attain His nature in the next life.

“And whoever, at the time of death, quits his body, remembering Me alone, at once attains My nature. Of this there is no doubt.” (Lord Krishna, Bhagavad-gita, 8.5)

The Vaishnava sees the violence that is necessary for meat eating. From a single image of a typical plate of flesh, they see the untold suffering the innocent animals must go through. They also see the reciprocal damage due to arrive in a future life. The Vaishnava understands that the foods in the mode of goodness offered to the Supreme Lord bring a much higher taste, one that doesn’t require unnecessary violence that is the product of a deluded consciousness. 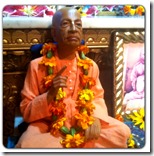 Understanding this situation, we see that the Vaishnava saints are the most glorious leaders. They aren’t looking to win a popularity contest. They know that even if no one buys what they are selling, that the act of glorifying God through spreading the philosophy of bhakti is worth it. In the Bhagavad-gita it is said that out of many millions of men, one will strive for perfection in understanding God. The Vaishnava saints look for such a person and try to help them reach their true potential, for this pleases both the person and the Supreme Lord, who reclaims another lost soul, granting them reentry into the eternal pastimes that take place in the spiritual world.

If evidence of corruption to know,

Hesitant you are for whistle to blow.

All friends and colleagues to lose,

If the path of honesty you choose.

Consider then the Vaishnava’s plight,

Chastised for speaking all that is right.

Still, with their path in confidence to proceed,

Understanding that of bhakti world so much in need.