Home › bhagavan › Director Of All Years

Director Of All Years

“Material energy has the power to cover knowledge, but this covering cannot be applied to the Supreme Personality of Godhead. It is applicable only to the prajah, or those who are born with material bodies, the conditioned souls.” (Shrila Prabhupada, Shrimad Bhagavatam, 3.26.5 Purport)

The Supreme Personality of Godhead can trick us. If He has the power to create, maintain and destroy, why shouldn’t He be able to do something as simple as make us take something for what it really isn’t? The good director of a blockbuster film makes us so forgetful that we think that the plot is taking place in real life. We forget that we’re watching a movie, as our emotions go up and down. The Supreme Lord repeats such a feat year after year, and He does it through one of His energies.

Consider this situation. You and a friend are at a party. At one point you’re sitting at a table having some food and drink. Afraid of the silence continuing, you strike up a conversation about the latest television shows you’ve been watching. Then your friend does the same. Pretty soon others join you at the table and offer their own opinions. Now you’re running through so many different shows, reviewing the good and bad points. One person likes the acting. Another likes the directing. One person loves the special effects, where staged explosions are made to look real. Another person likes the violence, the fight scenes.

So this is evidence of the illusion that is around us. In this case, there is a desire to be fooled. The illusion is intentional on both sides, from the content creator and the consumer. Interestingly, the entire world is covered in illusion. This is due to the material energy, which emanates from the Supreme Lord.

What is material energy? How is it different from other energies?

In the most basic understanding, material energy is the covering to spirit. Think of the shirts hanging in your closet. They are coverings. They can’t put themselves on. They don’t button themselves. If you lose a button, you have to sew it back on. The shirt doesn’t maintain itself. It doesn’t do anything in fact. You have to put it on in the morning and take it off at night.

Take the same concept and apply it to all life forms that you see. From the tiny ant all the way up to the leader of the nation. Each is wearing some kind of covering. That is the material energy. Breaking things down further, the energy comes in three modes: goodness, passion and ignorance. These are like three different colors; distinctions, if you will. The three modes can be combined in so many different proportions, and so you get the many different species.

Material nature covers spirit, which is inherently knowledgeable. As individuals, spirit is aware of the true identity. In simpler terms, I do know who I am. I am spirit soul, and I can see the difference between matter and spirit. However, when material energy covers me, I’m not able to see this. I’m put into illusion. Depending on the makeup of that covering, I may be able to see more or less of my true identity.

In the species of the human being, I have the best chance to see, to bring to light my actual knowledge. Material energy, which covers knowledge, is not a torture machine. It isn’t an energy which unfairly punishes. In fact, it acts at our desire. Just as we intentionally get fooled into forming attachments to plotlines in books and films, we at one point wanted to be forgetful of our true identity as spirit. We wanted to compete with the Supreme Spirit, and in order for that to happen we had to forget both our position and His. He is superior and we are inferior. He is the leader and we are faithful subordinates. When we are not faithful, it means we want to be covered in illusion. 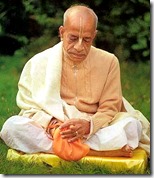 Just in hearing about material energy in this way makes us very fortunate. Someone is giving us a way out. Someone is letting us know that these outcomes we invest so much emotion in are not real. They come and go. They are scripted through the laws of karma, or action and reaction. The person passing on this knowledge is a whistleblower who wants to save us from further harm. Knowledge of our true identity helps us to regain our eternal occupation, devotional service. This is bhakti-yoga, and it is not sectarian. Any person, of any religion, can follow it. In fact, everyone has to follow it in order to remain out of illusion.

As the best director of the grandest play acted out year after year, the Supreme Lord’s knowledge never gets covered. He is the master of the material energy; it acts at His direction. When the individual desires to get past the illusion, the master removes the veil. Once recovered, armed with our knowledge we take up devotion, looking at the personal form of God day after day and wondering how we can continue to serve Him better. We feel so indebted to those who told us of our true identity and we promise to blow the whistle for as many other fallen souls as we can. We do all of this by regularly chanting the holy names: Hare Krishna Hare Krishna, Krishna Krishna, Hare Hare, Hare Rama Hare Rama, Rama Rama, Hare Hare.

That latest movie did you see?

Greatest of endings possibly to be.

Applying to creation, of maya the name.

When real knowledge to recover,