“Whereas other masters become furious at merely hearing about the offenses of their servants, Shri Rama, seeing the offenses Himself, never keeps them in His heart.” (Dohavali, 47)

Have you ever known someone who you think is full of faults? Perhaps they eat loudly, chewing with their mouth open. Perhaps they lack etiquette, telling you to your face if you’ve gained too much weight or lost hair. Perhaps they turn on the television to a loud volume in the morning while people are still sleeping, not caring about waking them up. And then that same person is the first to criticize an error in someone else. They don’t even have to see the mistake; just hearing about it is enough.

On the other side you have the Supreme Personality of Godhead. For His servants, those who are working hard to please Him, He may see the offense committed right in front of Him. He may witness the whole thing, and yet He will never reveal remembering it. He will never keep it in His heart. This is the opinion of Goswami Tulsidas, who says that God doesn’t even remember it in His dreams.

Does God dream? Isn’t that a product of the individual escaping from the temporary body and taking shelter only of the subtle body – consisting of mind, intelligence and ego? The comparison to the dream, sapanehu, used by Tulsidas is meant to explain that even involuntarily the Supreme Lord does not remember an offense of His devotee. We can try to forget things, but in our dreams they may come up regardless. We have no control over this. God does not forget. No aspect of Him is defective. It is just that He does not mind the offense. He knows the sincerity of the person working for Him.

Tulsidas says that other masters become furious with their servants right away. This should make sense if we think about it. In the employer-employee scenario, both parties are looking for something. The employer needs a specific job done. The employee wants to be paid for their work. When there is a mistake, the work of the employer is not done to their satisfaction. It may only take hearing of the mistake to make them upset. They will then reprimand their servant, the person working for them, and keep that mistake in mind. Consider the employee review that remains in a file with the human resources department. One outburst from the employee gets catalogued and can be used as grounds for termination at a later date.

Rama never terminates anyone from serving Him. Rama is the name used by Tulsidas here to address God. As we can see, it means that God is a person. Rama’s servants are engaged in work that brings the reward of increased devotion. With that devotion, they get to be with Rama more and more. So in essence, there cannot be an offense committed. There are mistakes for sure. There are accidents along the very difficult path of bhakti practiced in a world of duality. The old habits borne of illusion are not easy to give up. When the motivation is pure, when the desire is sincere, why wouldn’t Rama be so kind as to overlook faults?

“Even if one commits the most abominable actions, if he is engaged in devotional service, he is to be considered saintly because he is properly situated.” (Lord Krishna, Bhagavad-gita, 9.30)

The same truth is mentioned in the Bhagavad-gita. Lord Krishna, who is the same Rama but in a different form, states that the devotee can commit the most abominable act and still not have it hurt their progress. Of course this is not license to do anything and everything bad without fear. This is not the equivalent of thinking that since some higher figure died for your sins, you can now sin all you want. The meaning is that the seekers who really want to escape from the cycle of birth and death and take comfort in the amazing bliss that is the association of the personal form of God will find success eventually, even if they slip up from time to time. 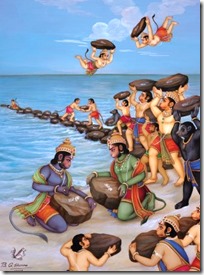 No other path has this guarantee. Rama is not out for anything. He asks for jobs to be done every now and then. During His time on earth, the monkeys in Kishkindha searched for His missing wife Sita. They built a bridge out of stones. They fought against creatures who used black magic. They were not perfect fighters; sometimes they were defeated. Sometimes they didn’t succeed initially, but Rama did not mind. Neither did Sita, who holds Rama’s servants very dear. Those servants then instruct others on how to accept the same path, even giving tips on how to avoid the common mistakes. They are very merciful in this regard, and all they remember is the good, which in bhakti-yoga never gets erased.

That mistakes to be made understood,

So in bhakti remembered only the good.

For Rama all work to Him the same,

Nothing needed, not looking for gain.

Mistake with His own eyes seeing,

Then from memory immediately freeing.

Compassion as such in no other found,

Why devotees to His service always bound.