“O Lord, although You are able to give all kinds of benedictions, I do not pray to You for the boon of impersonal liberation, nor the highest liberation of eternal life in Vaikuntha, nor any other boon (which may be obtained by executing the nine processes of bhakti). O Lord, I simply wish that this form of Yours as Bala Gopala in Vrindavana may ever be manifest in my heart, for what is the use to me of any other boon besides this?” (Shri Damodarashtaka, 4)

What do you think is the highest reward? There is the classic game of getting three wishes. It goes something like this: Suppose a magic lamp appears before you. You decide to rub it, and then a genie pops out. They ask you to make three wishes. If you were in this situation, what would you choose? Be careful, for once you’ve used them up you can’t ask for more. The Damodarashtaka says that even the highest reward in a material existence is nothing compared to the sight of an adorable child tied to a mortar in the courtyard of a loving mother living in Vrindavana.

You could ask for religiosity.

“Dear genie, please allow me to be dutiful to the tradition I inherited from my parents. There is something good about being religious. I want to show others that I believe in God. I want to convince myself as well that I am a good person. Let there be no lapse in respecting the duties prescribed to me.”

You could ask for economic development.

“Dear genie, please let me earn a lot of money. I want to make so much because then I will not have any worries. I see how much people struggle in this world. I see the pathetic images on television of those in other, less developed nations. Let me not end up like them.”

You could ask for sense gratification.

“Dear genie, please let me enjoy as much as possible. I want a beautiful spouse, children to play with, and very nice things. I’ve got my eye on this car. Let me have it along with so many other things. If I don’t have stuff, of what use is money? I want to enjoy life to the fullest.”

Moksha is considered the highest reward in a material existence precisely because of how difficult it is to get. Imagine having the ability to not get angry when others curse at you. That time that your wife really rips into you, where she brings up every mistake you’ve made in the past – think of not getting swayed in the least. Imagine being the same in temperament whether you get praise or dishonor.

“For one who has conquered the mind, the Supersoul is already reached, for he has attained tranquility. To such a man happiness and distress, heat and cold, honor and dishonor are all the same.” (Lord Krishna, Bhagavad-gita, 6.7) 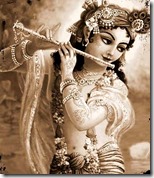 This equanimity is very difficult to achieve. Moksha brings a steady existence that is free of ups and downs. In one sense it is nothingness, though individuality can never be totally annihilated. In the Damodarashtaka, the author readily acknowledges that God is Mukunda. He knows that the Lord can grant moksha very easily, should He be pleased. Even Lord Shiva, who is like God but in a slightly different form, can grant moksha.

The author asks only to have Bala Gopala manifest in his heart. The person here knows that they will always be an individual. Whether they take birth as an animal or as a human being, they are not so worried. They are not concerned with mukti, of which there are five kinds. In one of them you get an opulent body that looks identical to God’s form of Narayana.

“A pure devotee does not accept any kind of liberation – salokya, sarshti, samipya, sarupya or ekatva – even though they are offered by the Supreme Personality of Godhead.” (Shrimad Bhagavatam, 3.29.13)

So God can give you a form like His. In that realm, known as Vaikuntha, everyone looks the same, and the only way you can distinguish God is by looking for the Shrivatsa, which is the mark of His consort Lakshmi that remains in His chest. So God can grant even this kind of liberation, and who will not accept it?

The bhaktas are aware of the spiritual version of liberation. Mukti itself is a kind of material thing, since it is basically the negation of a material existence. True liberation is love for God, which the author has and hopes to always keep. He loves the form of Bala Gopala, which is Krishna in His childhood form in Vrindavana. Mother Yashoda bound Him with ropes of affection to a mortar as punishment one time. 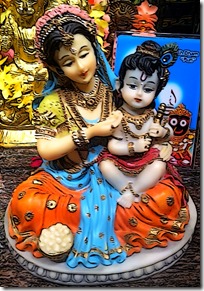 For thousands of years wise saints and poets have been trying to figure out that incident. They marvel at how a loving mother can do that to God, how she can be so fortunate. They continue to appreciate Krishna for allowing it to happen. They are liberated simply by remembering that incident, and they know that since Krishna is Mukunda, He can give anything. Therefore they ask to have this form remain in their hearts, allowing them to stay liberated in bhakti though apparently living in a material existence.

When Bala Gopala to adore.

Genie in magic lamp can come,

But devotee to ask for wishes none.

Image in their pure hearts to store.

Merging in oneness to bhakta no appeal.