“Previous to that in fact, the greatly fortunate Saumitra, who is the delight of his friends, adorned with tree bark for preparing for the journey with his elder brother.” (Sita Devi speaking to Hanuman, Valmiki Ramayana, Sundara Kand, 33.28)

The complaints against organized religion should be familiar, and they seem legitimate if a thorough study of history is made.

“Religion has killed so many people throughout the course of human history. Look at all the major wars. See how many innocent people have been duped by frauds and cheats. Religion has been used to discriminate, to suppress, and to advance the agenda of a few at the cost of the many. It has been the recourse for the weak and the less intelligent, who didn’t want to actually work for what they got.”

Indeed, one person approaches a certain god to get good health, and another person changes their diet. What is the difference between them? How is one any better than the other? One person prays to God to keep their ailing family member alive and another doesn’t pray at all. The person who prays doesn’t get their wish granted and the person who doesn’t pray is happy with the outcome to their problem.

Why should there even be different religions? Isn’t there a single creator who made everyone? If He made everyone, why would He want different kinds of worship? These contradictions make following any kind of spiritual life difficult. Adding even more complexity is the issue of the purpose to life. If there was a God, what would He want from us? We know that death takes everything away, that time operates on things to make them temporary as soon as they are born, so what is the point to doing anything?

Sita Devi provides some answers in describing the history of how she ended up in the Ashoka grove in Lanka. She is the wife of Lord Rama, the Supreme Personality of Godhead appearing on earth in the guise of a warrior prince. Rama is that true origin of all, who does not discriminate based on species, gender, ethnicity or the type of religion practiced. He loves every one of His children, and He shows this by staying with them as the Supersoul.

“I am the Self, O Gudakesha, seated in the hearts of all creatures. I am the beginning, the middle and the end of all beings.” (Lord Krishna, Bhagavad-gita, 10.20)

His compassion can also be seen in the fact that the things most required in life are relatively inexpensive and high in availability. Water, milk, grains, fruits, simple linens and basic shelter are typically easier to procure than meat, wine, fine fabrics, expensive gadgets and large residences. Rama’s kindness is further shown in the material nature, which operates indirectly under His overall supervision. That nature gives all the things necessary for life to continue. Within the sky are all the stars, and within the earth are all the seeds.

“Just as within the earth are found every kind of seed and within the sky live all the stars, Tulsidas knows that Shri Rama’s holy name is the reservoir of all dharma.” (Dohavali, 29) 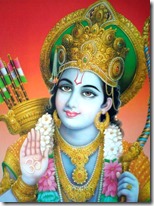 In the same way, within devotion to Rama Himself is all dharma, or religion. Every perspective there is on spiritual life, every reward sought out, can be gotten through devotion to Rama alone. One who takes to this devotion is highly fortunate, maha-bhaga, because gradually they realize the importance of the person being worshiped as opposed to what is sought. In the many religions and philosophies the rewards sought are generally the same. Whether one is a Christian, a Jew, a Muslim, or a Hindu, their requests can still be put into four categories: economic development, sense gratification, adherence to righteousness and ultimate salvation.

The ultimate religion actually transcends these four benedictions. That religion is unifying since it can be practiced by one and all. It does not require a change of allegiance or faith in a particular establishment. That religion is a way of life, a consciousness. In that thinking, one becomes most fortunate, since they get the benefit of God’s association.

This was the case with Lakshmana, who abandoned a comfortable life to be with his elder brother Rama. From studying Lakshmana’s situation, we see that he had many of the things commonly asked for in religion. He had religiosity; so much so that he was a defender of righteous principles. Lakshmana found tremendous economic development, having anything the mind could want available to him. He had ample opportunity for sense gratification, and through showing renunciation when needed he was well on his way towards ultimate salvation.

His religion is giving delight to his brother, even if sometimes Rama asks for something else. The same goes for Sita. In fact, no one can delight Rama more than those two. Hanuman also delights Rama, but through the route of a servant. One of his tasks was to find Sita. He succeeded. His meeting with her brought the verse quoted above.

Devotion brings delight to Rama. The attitude is unique to all religions. The mood is to first give, not to take. It is to ask for more opportunities for service instead of looking to see what good results are coming from prayer and worship. The delight that goes to Rama gets returned to the worshiper, who can get the benefit even through worshiping Rama in one of His many other forms. The generic “God” references Him as well, but the delight isn’t as much as when the interaction is with a personal form. The service can be through something as simple as chanting the holy names, which anyone can do: Hare Krishna Hare Krishna, Krishna Krishna, Hare Hare, Hare Rama Hare Rama, Rama Rama, Hare Hare.

So many religions to see,

A unifying purpose can there be?

Meant for to God to bring,

To leave everything no hesitation took.

By Sita and Hanuman also shown,

Asked to serve, not for benefit their own.