Home › sita and hanuman › Into The Unknown

“Highly respecting the order of the one we serve, and firm in our vow, we entered the forest, which we had not seen before and which gave the appearance of being very deep.” (Sita Devi speaking to Hanuman, Valmiki Ramayana, Sundara Kand, 33.29)

Bhakti-yoga has synonymous terms such as “bhagavata-dharma” and “sanatana-dharma.” It is the essence of activity for the essence of identity, the spirit soul. It is eternal service to the one who eternally lives to be served. It is devotion to the one person who can accept an endless amount of devotion from an endless amount of people and reciprocate with each appropriately.

These definitions give a broad overview, but they don’t provide much details into what life will initially be like for one who takes up devotion.

“If I take up bhakti-yoga, will I become rich? Will I have a lot of money? I know that others worship to get these things. If not for the present life, they hope that in the future, after death, they will not be in circumstances of poverty. Some of them ask for this directly from a deity of choice.”

“If I take up bhakti-yoga, will I have good health? I hate it when I get indigestion after eating. Sometimes it feels like my stomach is going to explode, even though I didn’t eat so much. The health experts say to eat a lot of fiber, but when I eat things like oatmeal, I end up in worse shape. I want it so that my health will always be tip-top. I know that others pray for this right now.”

“If I take up bhakti-yoga, will I get to enjoy with an attractive significant other? Every movie I see has this goal as the foundation. Once the two parties meet, everything is good. I know that in specific traditions you can worship someone to get a good spouse. This world is so vast and complex that no one has total control over their future. Therefore the wise ones pray to higher authorities to get what they want.”

“If I take up bhakti-yoga, will I find peace? The name ‘yoga’ is there, so does this mean I will be able to meditate in quiet? I know others do this right now. They spend some time each day sitting in a particular pose and breathing in and out in a regulated manner. Others go on retreats so that they can concentrate better.”

From the above referenced verse from the Ramayana, we learn that in bhakti-yoga no specific condition is guaranteed. You may end up going somewhere you have never previously been. You may have to give up all your riches and family ties. You may have to roam through a dangerous place, not knowing where exactly to go.

If this is the case, why would anyone take up bhakti-yoga? Why is it considered the constitutional engagement, standing above even liberation from the cycle of birth and death? How can it be superior to the rewards mentioned above?

In bhakti-yoga the pure love itself is the only thing sought and needed. Life in a temporary world is just that: temporary. If you’re stuck in a place that has lots of mosquitos and spotty electricity, it’s not so comfortable. Eventually, though, the misery will fade. You’ll find better circumstances. Then those circumstances will change as well.

Whether the good or bad remains for a long or short time doesn’t matter much in the end. According to the Bhagavad-gita, the true understanding of day and night is through the reference point of Lord Brahma. His day consists of one thousand cycles of the four yugas, or ages, of creation. His night is the same duration. So Brahma’s one day is billions of years. In that time, there can be good and bad, but they both will be impermanent.

If you have service to the Supreme Lord, you can not only survive in any situation, but thrive in it as well. Here Sita tells of how she and Lakshmana followed Rama to the forest, which appeared dense. None of them had gone to this area before. They were to spend fourteen years there, as per the order of King Dasharatha.

They were not afraid to go due to the faith they had in Rama. He is the Supreme Lord, the object of service in bhakti-yoga. He appears and disappears from this earth whenever He chooses. His appearances offer the opportunity for service to so many. They also give tangible examples of how devotional service works.

Sita is Rama’s wife. Lakshmana is His younger brother. The two lived through both splendor and squalor. They were in the opulent kingdom of Ayodhya and then suddenly in the dense forest. The difference is stark according to our understanding, but we can use drastic differences from our own lives to understand the concept. 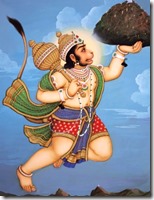 Things always change, but in bhakti-yoga the constant is service to God, who is all-attractive. In devotion, one may find themselves in unknown territories, but with the same faith that Sita and Lakshmana had everything will turn out successful in the end. Shri Hanuman also serves Rama, and he ended up going to a completely new territory that was hostile to devotional service. His devotion is so strong that no one could stop his service. The same goes for Sita and Lakshmana and anyone who follows in their footsteps.

In bhakti will I be alone,

And go to places unknown?

Will I have peace of mind,

Or great wealth will I find?

Sita and Lakshmana the example giving,

One day in kingdom, next in forest living.

Both the good and bad time to wash away,

But association of Supreme for devotee to stay.