Is God everywhere? Can He be seen with the naked eye? Isn’t the idea of a single person directing the millions of results to actions a fairy tale? Isn’t it more of a hope, a concept to help alleviate the pain of loss, the sting of the knowledge of guaranteed death? A young child a long time ago saw the Supreme everywhere. He was not embarrassed by this vision. He was confident in himself, to the point of disobeying the orders of people much more powerful than him. The occasion of Narasimha Chaturdashi celebrates one special incident that proved that the boy was right all along, that his faith in the existence and mercy of the Supreme was not in vain.

Young children are known to make up things. They develop the imaginary friend. Since the children are dependents, they don’t have full freedom. They can’t get in the car and drive to a restaurant of their choosing for dinner. They can’t decide to stay awake all night or sleep longer in the morning to miss school. They must do as the elders say, so in frustration it is understandable if they should create someone in their imagination. This “friend” listens to what they say. The friend doesn’t judge.

For young children there is also so much of life left to experience. Therefore it is understandable if they mistakenly see things that are not there. In Vrindavana a long time ago, children saw something amazing with their own eyes. They saw the son of mother Yashoda drag a mortar through two trees. The boy was tied to that mortar as punishment. When the mortar went in between, the trees fell down. Yet that wasn’t the end to the amazing sight. After falling down, from the trees emerged two heavenly beings.

“While the elderly cowherd men were thus contemplating, the small children who were playing there informed the men that the trees fell due to Krishna’s pulling the wooden mortar with the ropes to which He was bound.” (Krishna, The Supreme Personality of Godhead, Vol 1, Ch 11)

Some of the elders did not believe the children when they heard the story. They attributed it to the wild imaginations of youth. What those children saw did actually happen, as that child tied to the mortar was Shri Krishna, the Supreme Personality of Godhead. Thousands of years prior to that incident, another boy saw something amazing relating to the same Krishna. Named Prahlada, this child saw the divine influence everywhere.

This vision is difficult to acquire for even the seasoned adult. From the time of birth, the flawed identification with the body begins. The individual thinks that their body identifies them, though they had no say in acquiring that body. They have no idea for how long it will last and what will happen to them later on. Among other things, this flawed identification leads to the duality of friendship and hatred. One person is considered a friend while another is an enemy, but in fact both are struggling through the same material existence.

“Prahlada certainly heard and recited the topics of politics and economics taught by the teachers, but he understood that political philosophy involves considering someone a friend and someone else an enemy, and thus he did not like it.” (Shrimad Bhagavatam, 7.5.3) 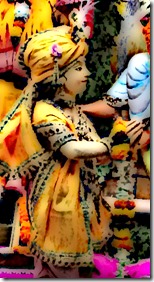 Prahlada saw the divine influence in every single person. He saw past the body, which is a product of the illusory energy known as maya. He considered everyone to be equal at the spiritual level. Yet this highly advanced vision, which is validated by the scriptural information of the Vedas, was not appreciated at all. Prahlada’s father wanted the boy to see duality. He wanted Prahlada to consider anyone against the royal crown to be an enemy. Any person attempting to acquire power was a threat and Prahlada had to learn how to deal with them.

Very soon the father Hiranyakashipu viewed Prahlada as the greatest threat. What was the boy’s strength? What was the sign of his advancement? It was the vision of the Divine. Prahlada was very liberal in this regard. He tried to get his friends in school to look upon the world the same way. He tried to get his belligerent father to understand the same. Yet the father could not tolerate this, for to him God was the original enemy. And now that enemy had taken over the mind of his son.

Prahlada’s vision was not an imagination; it was true. Hiranyakashipu thought Prahlada was foolish to think that God was everywhere. So he challenged his son to show him that God was in a pillar standing next to them. Unfortunately for Hiranyakashipu, Prahlada was not wrong. From the pillar emerged a ferocious being, a half-man/half-lion. It was Krishna Himself. The same Supersoul that is the life of everything living, the ability in man and the sustainer of the universe arrived at the scene to bear witness to Prahlada’s greatness. 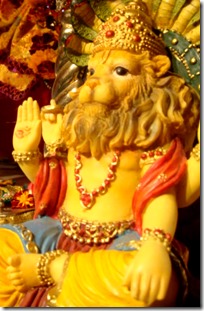 Narasimha Chaturdashi is the anniversary of that famous appearance. Known in that form as Narasimhadeva, the Supreme Lord Krishna made quick work of the demoniac king Hiranyakashipu. The father did not want Prahlada to be right. The boy’s staunch devotion to God could not be tolerated. Therefore Hiranyakashipu tried in so many ways to kill Prahlada, but it was not meant to be. God is indeed everywhere, and armed with the knowledge of the science of self-realization anyone can see this. Even a seemingly helpless child can have this vision, one that is protected by the Supreme Lord Himself.

Of parents love a beneficiary,

Since full experience not yet,

In life mistaken visions to get.

But with Prahlada not the case,

The Divine vision from him none could erase.

Belligerent father despite how hard he tried,

Killed by God, on Krishna the boy relied.