Home › conversations › Talking About A Voice From the Sky

Talking About A Voice From the Sky

“Arjuna said, My dear Krishna, O infallible one, my illusion is now gone. I have regained my memory by Your mercy, and I am now firm and free from doubt and am prepared to act according to Your instructions.” (Bhagavad-gita, 18.73)

Friend-One: I heard something interesting recently. It relates to God being within all of us.

F1: Right. There is a spark of spirit within the living body. The spark is what makes everything happen. You can call spirit the animating force.

F2: And this force is not exclusive to the human species. Anything that lives is animated by the same thing.

F1: So along those lines, I came across something interesting relating to offering obeisances. You know, like when you bow in front of a respected personality.

F1: There is a student and he wants to pay obeisance to his spiritual guide. The guide refuses the gesture, saying that God is within the student too. Because of that how can he accept God reaching down and touching his feet?

F2: What is your opinion on that?

F1: Like I said, I thought it was pretty interesting. Not sure if the guy was trying too hard to be humble or if he really did see God in his student.

F2: It is a nice gesture, that’s for sure. But what exactly did he see of God in his student?

F2: Living is a sign of the Divine. You can’t deny that. But does this mean that everything living is God? Can I go up to a tree and ask it about the meaning of life? Will the infant be able to tell me about the cycle of birth and death and karma?

F1: With the infant, maybe in due time.

F2: I’m talking about right now. God is not limited to the circumstance. He can deliver a person anywhere and in any species.

F1: Okay, so I was thinking about this as it pertains to the Bhagavad-gita. I’ve come across commentaries and opinions that say the surrender mentioned in the Gita is to the Krishna within us. What do you say about that? 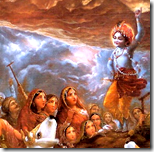 F1: I see what you’re saying, but there is something mentioned in the Gita about Krishna residing within every person’s heart. So doesn’t that mean the vision of seeing God in the student is accurate? Isn’t that the Krishna within all of us?

F2: Krishna is referring to the Supersoul, or Paramatma, when He speaks of His presence in the heart. This is an expansion of God. We are individual soul, or jivatma. Both emanate from God. Spirit comes from spirit; life comes from life. Therefore we are part of God. There is no doubt about this. But just because the individual soul and the Supersoul are within every person, it doesn’t mean that every person is God.

F1: Well, what about the argument that people simply haven’t become God realized yet? That is what Krishna is teaching to Arjuna, to become a perfectly realized soul. In that way it’s understandable for the guru to refuse the obeisances offered by his advanced students.

F2: There’s an easy way to answer this. Who spoke the Bhagavad-gita?

F2: Correct. A person spoke the Bhagavad-gita. That person kept referring to Himself in the many verses spoken to Arjuna. If He really thought that every person was God, He wouldn’t have needed to be on the scene.

F2: He could have spoken to Arjuna as a voice from the sky. You’ll see on the covers of some books translating the Bhagavad-gita that Krishna has been cropped out. They’ll say things like “God speaks to Arjuna.”

F2: I’ve seen it. We know that this is a great form of cheating. It is not historically accurate. The cheaters want it to be the case, that some mystical figure came and delivered Arjuna. But the history says that it was Krishna. Any person can have that name, so Arjuna addressed the teacher in other ways too. Krishna is Janardana, the maintainer of all living entities. He is Govinda, the one who gives pleasure to the cows and the senses. He is Hrishikesha, the master of the senses. This Krishna has two hands and plays a flute. He grows up in the farm community of Vrindavana and descends to earth whenever and wherever there is a decline in religious practice and a rise in irreligion. 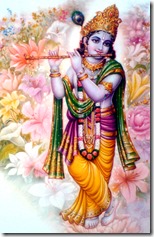 F2: Exactly. Thorough; not vague. Krishna is not an abstract. If He were, He would have hid Himself while taking part in this most famous dialogue. So yes, the Supreme is inside each of us as the Supersoul. We should respect others because of this. At the same time, we are not the Supreme. He is separate from us, and He deserves our worship. The people who teach us these confidential truths also deserve the same. Therefore you see the great respect given to the guru, who passes that respect on up the chain until it reaches the origin, who is Krishna.

If God to all particles is one,

Then for Arjuna a voice would have become.

No need for touching feet on the ground.

Yet it was a person who to him came,

Having form, qualities and name.

Surrender to that origin of all,

Chant His names, with love to Him call.