“Tulsi says don’t play two games; play one. Why fool yourself? Either have attachment for Rama or abandon attachment to others.” (Dohavali, 79)

In Sanskrit mamata means “attachment.” It is the idea of possessiveness, wherein I view something as mine, belonging to me. The two concepts of “I” and “mine” are the products of illusion. Nothing is really ours, as we didn’t create anything. Even this body that belongs to us is only on temporary lease. Eventually, we will give it back. The true definition of “I” is “I am a spirit soul.” And the real definition of “mine” is the relationship I have to the Supreme Soul.

Goswami Tulsidas advises against playing two games. In one there is some consideration for spiritual life. Basically, have some understanding of the Supreme Soul, that He pervades the entire creation and remains a singular personality at the same time. Pay Him some respect, learn about His transcendental features, and try to be conscious of Him.

The second game is maintaining attachment to the temporary. Buy a new car, a new house, a new shirt, a new video game, or a new exercise machine. Whatever you purchase, label it as yours. It is your possession. Think the same of your friends and family.

To play both games at the same time is not wise since they conflict with one another. If you are attached to God, then how can you be attached to maya? The definition of maya is “that which is not.” The Supreme Lord is that which is, the Absolute Truth. Maya is His illusory energy, a way to trick the living entity into thinking that they are things other than a persistent spirit soul, part and parcel of God.

Playing the two games at the same time is something like taking a shower while having mud poured on you. You take the shower to cleanse yourself, and yet you’re getting dirty at the same time. What is the use, then?

Tulsidas recommends to either have mamata for Rama or relinquish mamata for other things. Attachment to Rama is the superior path, for if practiced properly and with determination it automatically leads to renunciation. The second path is also good, as through detachment one becomes dear to Rama. They become eligible for receiving His favor.

Continued attachment to other things means continued travel on the train known as reincarnation. It is like the example of having dirt thrown on you, as the material covering is not natural to us. For this reason it constantly changes. In this lifetime it shifts from boyhood to youth to old age, and after death the covering could change its nature entirely. The different species we see are merely spiritual entities accepting different kinds of coverings. 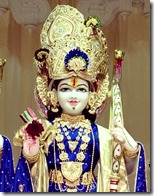 How do I become detached? How do I avoid playing the conflicting games? It is very difficult at the outset, as the attachments are so strong. How can we become attached to someone whose features we don’t even know? It is for this reason that Tulsidas mentions Rama. Not that God is impersonal, but He can accept any transcendental form He chooses. He incarnates in the deity to give us an idea of what His form looks like. Our eyes can’t see the entire cosmos and everything happening within it. Our hands don’t have the ability to create clothes large enough to fit the body of the Supreme Lord. Through His mercy He appears every now and then and gives glimpses of His greatness.

The conflict must be there in the beginning. There is no way to avoid this. It is through association that things start to change. The best way to associate with God is to chant His names, such as those found in the maha-mantra: Hare Krishna Hare Krishna, Krishna Krishna, Hare Hare, Hare Rama Hare Rama, Rama Rama, Hare Hare.

The wise person forms an attachment to chanting these names. The names are identical to Rama Himself, so the attachment is actually towards Rama. When service to God in the form of regular chanting becomes the top priority, then detachment automatically develops. Thus the devotee is safe on both sides, paving the way towards liberation at the end of life.

Stepping in shower for cleaning chore,

At same time mud on yourself to pour.

Devoted but attached to maya are you.

Contradictory is the other way.

When names chanted and worship done,

Then simultaneously detachment to come.