“And the highly splendorous Lakshmana, who is the dear follower of your husband and overcome himself by grief, bows his head in offering obeisances to you.” (Hanuman speaking to Sita Devi, Valmiki Ramayana, Sundara Kand, 34.4)

As he is an emissary, it is reasonable to expect Shri Hanuman to bend the truth from time to time. According to the ancient philosophy that is the Vedas, there are four means of diplomacy. You can make friends with the other party, offering pacifying words. That is sama. You can try paying them off with gifts; dana. This is seen quite often in the political arena. There is using force to get what you want; danda. A more underhanded approach is bheda, which is division. You sow dissension in the enemy ranks and let the infighting do the work for you.

Though he is skilled and capable in all four of these tactics, when discussing matters of the Supreme Lord, Hanuman remains honest. Even in his first meeting with the prince of Ayodhya, Hanuman couldn’t maintain his false guise for long. Ordered by the monkey-king Sugriva to greet the two strangers approaching in the Kishkindha forest, Hanuman assumed the false guise of a brahmana, or priest. Yet as he continued to speak and saw no visible change in expression on the face of Rama, Hanuman eventually came clean and revealed who he was.

“When I have spoken to you thus, why are you not responding to me? A pious soul named Sugriva, who is a warrior and a hero among Vanaras, being expelled by his brother, wanders the earth with a distressed mind.” (Hanuman speaking to Rama and Lakshmana, Valmiki Ramayana, Kishkindha Kand, 3.19-20) 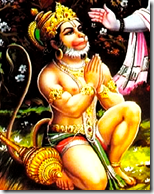 In this verse from the Ramayana, we get another instance of Hanuman’s honesty. This time he is talking about Rama to Rama’s wife, Sita Devi. Hanuman mentions Lakshmana, who is described as the brother dear to Rama. The Sanskrit word used is priya, which means “dear”. It can also mean “favorite.”

But if Rama is God, how can He have a favorite brother? The Sanskrit word anuchara gives us an idea. Lakshmana follows Rama. This isn’t driven by personal motive. In recent times a reality television series featured a contest where the winner would get to work in a large company headed by a powerful businessman. The job was something like an apprenticeship, where the new hire would be under the tutelage of the boss having tremendous business acumen.

Each party has an interest. The apprentice wants to learn so that they too can one day be successful in business. The owner wants qualified people working under them so that one day they can hand over the company to capable hands.

Lakshmana follows Rama out of pure love. He follows no matter the circumstance. If Rama is sent on a mission to help protect sages in the forest from the attacks of night-rangers, Lakshmana goes along. If Rama gets kicked out of the kingdom for fourteen years, Lakshmana insists on following.

“I envy no one, nor am I partial to anyone. I am equal to all. But whoever renders service unto Me in devotion is a friend, is in Me, and I am also a friend to him.” (Lord Krishna, Bhagavad-gita, 9.29)

From the Bhagavad-gita we learn how God can be both impartial and favorable at the same time. Shri Krishna, who is the same Rama, the Supreme Lord, says that He is neutral towards everyone. He doesn’t play favorites. But if someone renders service to Him in devotion, that person becomes a friend.

Consider, then, the person who offers service constantly, without break. Their whole life is dedicated to service, the kind known as bhakti-yoga. Such a person would have to be incredibly dear to the Supreme Lord. In this way we see how Rama can love all His brothers equally and yet still consider Lakshmana to be His favorite. In truth, all four sons of King Dasharatha of Ayodhya are incarnations of the original Personality of Godhead.

The favorite brother offers his obeisances to Rama’s wife. This is included in the message passed on by Shri Hanuman, who, like Lakshmana, never deviates from devotional service. Sita is the same way. It is not surprising that the four are commonly worshiped together in the image known as the Rama Darbar. This is Rama’s court. He rules with kindness and determination. He is highly powerful, maha-teja, as is Lakshmana.

Hanuman is courageous. He can be both gentle and firm. When the situation calls for force, he does not hesitate to use it. In this instance he must speak about Rama and Lakshmana, and in this endeavor Hanuman is always honest. Sita knows Rama and Lakshmana very well, so by reviewing these qualities Hanuman proves his authenticity. He is the favorite messenger of Rama, and he knows everything about Rama’s family and devotion to Him.

Since Rama equal to all,

How Lakshmana favorite brother to call?

Contradict the position does it not?

Seen when following devotion without stop.

To dense and desolate forest, even there.

Favorite messenger, ready to give his life.