Home › conversations › Talking About Devotion With a Cause

Talking About Devotion With a Cause

“Some people approach Him in the pursuit of knowledge of the Absolute Truth, and others approach Him when they are distressed, like the devotee Gajendra. Others are inquisitive, like the great sages headed by Sanaka, and others need money, like Dhruva Maharaja.” (Shrila Prabhupada, Chaitanya Charitamrita, Madhya 24.94 Purport)

Friend1: Are you familiar with the term “causeless mercy”?

Friend1: What does that mean exactly?

Friend2: Well, what do you think it means?

Friend2: It means that there are no strings attached. You’ve heard of the expression, “Made a deal with the devil”?

Friend2: Exactly. That’s where you sacrifice a lot for something that isn’t so important. You’re getting something right now, but you’ll have to pay the price later on. You probably will have to pay dearly for it.

Friend1: And with God there is no price. He is giving you His mercy because that’s how He is. He is merciful.

Friend2: The most merciful.

Friend1: Alright. Thanks for clearing that up. Of course I had a different question originally.

Friend2: You always do.

Friend1: The word “causeless” got me to thinking. My mind wandered to the issue of pure devotion. Can bhakti ever really be pure?

Friend2: Sure it can.

Friend1: Let me expand. In this world when do people take to bhakti?

Friend2: There is no set pattern. It can happen right after birth. Devotion is open to everyone. There is no specific prequalification necessary. That’s why it stands above karma, jnana, and yoga.

Friend1: Let me stop you before you proceed further. I’m getting somewhere. Let’s use the example of an adult. When do they take to bhakti?

Friend2: Again, it could be at any time. Where are you going with this?

Friend1: What I’m trying to say is that a person takes to devotion only after something happens. A stimulus must be present. Well, let me revise that. In so many cases, there is a stimulus present.

Friend1: Sort of how Krishna describes in the Bhagavad-gita that four types of people approach Him in devotion.

“O best among the Bharatas [Arjuna], four kinds of pious men render devotional service unto Me – the distressed, the desirer of wealth, the inquisitive, and he who is searching for knowledge of the Absolute.” (Lord Krishna, Bhagavad-gita, 7.16)

Friend2: Oh, I see what you’re asking. Since these people initially want something, how can their devotion be pure?

Friend1: Not even that. I understand that eventually the initial desire goes away. What brought you to bhakti doesn’t necessarily stay with you. You can become pure through time. But the thing is, there is still that initial event. Let’s take the distressed as an example. If I had a horrible tragedy in my life that led me to read the Bhagavad-gita, doesn’t that mean my devotion is tainted forever? How can I be a pure devotee if I required that initial trigger? Isn’t my devotion with a cause?

Friend2: Technically, it is. But there’s nothing that you or I can do about it. We’re in the material world for a reason, you know. The very fact that we took birth means that we are not totally pure. 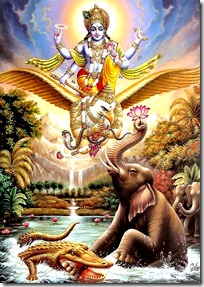 Friend1: I think about the story of Gajendra. He was rescued by the Supreme Lord when he took full shelter. But he only surrendered when there was no other option left. He was stuck and about to die. To me that’s the classic example of devotion with a cause.

Friend2: The thing is, you’re stuck on time. What we see around us, the different states of being, they are simply a manifestation of time. Just shift a little in time, and you have a completely different situation. You’re taking one point in time where there is impurity and then trying to extend that impurity forever into the future.

Friend2: There is one important thing to know in this regard. Shri Krishna does not care from where you came; only to where you are going. There is that saying that every saint has a past and every sinner a future.

Friend1: Oh yeah, I’ve heard that one. I like it. It makes you think.

Friend2: Right, so even the purest person has some past transgression. To err is human, after all. Devotion is with a cause, but that cause is not remembered by the Supreme Lord. There is the example of the Vanaras of Kishkindha. They were in monkey bodies. They helped Shri Rama rescue His wife Sita from Lanka. They took part in the war because their leader Sugriva commanded them to. They may not have been pure at the beginning, but Rama did not care. He appreciated their service so much. He holds them so dear. And these monkeys were highly exalted. To find that level of purity is very difficult. So whatever the initial mindset, as long as we find devotion and stick with it we remain very dear to the one who is most worth pleasing.

Whether quickly or into slowly easing,

Shri Krishna the one most worth pleasing.

Caring not from where we came,

Only that in devotional life we remain.

Though Gajendra only when in desperation,

For any soul, for to supreme destination going.