Taking Credit For The Creation

The followers of Vedanta philosophy typically fall into one of two camps. There are the Mayavadis and the devotees, i.e. impersonalists and personalists. The Mayavadis believe there is no personality behind the spiritual energy. They acknowledge the difference between matter and spirit, prakriti and purusha. They know the difference between Brahman and maya, or the Absolute Truth and illusion. They think that ultimately spirit itself is the cause. In the present manifestation, the complete whole of Brahman has been fragmented. Once those fragments come together, the whole will be complete again.

The personalists believe in Bhagavan, who is the Supreme Personality of Godhead. Another way to describe Him is Parabrahman. This means the one who is superior to even the complete spiritual energy. There are different ways to describe the philosophy of personalists. Some say it’s a combination of dual and nondual. Some say it’s a special kind of combined dualism and nondualism. The philosophy of Chaitanya Mahaprabhu provides the most complete definition. The term is achintya-bhedabheda-tattva, or the truth of simultaneous oneness and difference.

An obvious way to tell that there is dvaita is from the fact that we are not the source of everything. The Bhagavad-gita is a famous work of the Vedic tradition that both personalists and impersonalists respect and reference. It is a conversation between guru and disciple. The guru is Shri Krishna and the disciple Arjuna. Krishna is not ambiguous about the fact that He is the Supreme Personality of Godhead, Bhagavan. Both impersonalism and personalism are mentioned. Arjuna at one point even asks which path is better.

“Arjuna inquired: Which is considered to be more perfect: those who are properly engaged in Your devotional service, or those who worship the impersonal Brahman, the unmanifested?” (Bhagavad-gita, 12.1) 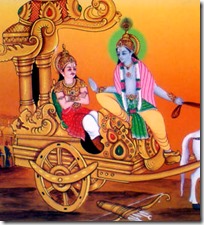 Krishna several times mentions how He is the source of everything. These statements by themselves negate the core of Mayavada philosophy. If every living being is the same, if there is no individuality at the highest level, then it means that I am the source of everything. Though Krishna lays claim to this title, since I am the same as God, I could go around saying the same thing. If my son asks me where we came from, I can tell him that it was me. I created this and every other world. You can do the same, my child. Every person has a right to follow this line. 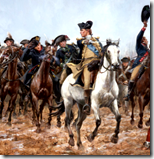 We know from recorded history that a person named George Washington existed. He was one of the people who started the nation known as the United States of America, being influential in overthrowing the British and giving birth to the governing documents like the Declaration of Independence and the Constitution. This group of men is collectively known as the Founding Fathers. Based on the advaita logic, I can equate myself with George Washington. After all, he is a person and I am a person. He is Brahman and so am I. Therefore, I led the Continental Army to victory against the British. I was the first president of the United States. I don’t remember these things, but that is only because of the influence of maya.

Obviously such thinking is preposterous. Yet the Mayavadi would have to deny the existence of an individual creator if they are to be loyal to their philosophy. The words of Shri Krishna are both truthful and instructive. There is nothing lost by acknowledging that an all-attractive figure, who is full of mercy and compassion, created this and every other universe. Shri Krishna delivers the surrendered souls, those who are tired of spinning on the wheel of reincarnation. The powerful bow warrior Arjuna accepted everything that Krishna presented to him as is. That is the meaning to the Bhagavad-gita, and anyone who says otherwise is engaged in a high form of cheating.

By following philosophy of Mayavada name,

This means that world created by me,

I am the source of all that you see.

The same by you can be done,

Difference to historical figures none.