“Spiritual taste is like the ocean in the sense that it is very great. The Pacific Ocean is always tossing, but it is not increasing. By God’s order, the ocean does not extend beyond its limit, and if it extends, there is havoc. Lord Chaitanya Mahaprabhu says that there is another ocean, an ocean of transcendental bliss, an ocean that is always increasing.” (Shrila Prabhupada, Path of Perfection, Ch 1)

It is common to see a plethora of toys in the playroom of the young male child in modern times. There are likely many toy cars and airplanes. Take that same person in ten years’ time and the situation changes. The toys may still be there, but they are stowed away. Some day another child might come along to play with them.

The reason for the change is that the activity ceased to be engaging. Interests shifted elsewhere. This is not unique to children, either. Adults get bigger and more expensive toys, and they don’t necessarily keep a constant eye on them. After all, the very nature of progress is imperfection. You can only progress from something if that something is imperfect in some way. This means that every point reached will be left behind at some point in the future.

Devotional service, when practiced properly, does not have the same defect. The law of diminishing returns does not apply. Indeed, the laws that we know to be inviolable in the present realm are conspicuously absent in the spiritual world. In that imperishable land, you can take something away and still have it. You can feel full pleasure and then somehow find a way to increase from there. These are contradictions to the human mind, but that mind is a product of the material nature, which has defects.

In the Ramacharitamanasa the venerable sage Valmiki describes how the devotees never tire of hearing about the deeds of the Supreme Personality of Godhead. He compares the ears to reservoirs that take in rushing water from incoming tributaries. Despite the nectar in the form of Hari-katha constantly flowing in, the reservoir never fills up. The enthusiasm only increases.

This is because the beneficiary of service in devotion is Himself infinite. He is without limits. The Sanskrit word Krishna says that He is all-attractive. Every aspect to Him is appealing to some degree. The person with the pure consciousness is fully attracted by every feature, but even the less intelligent can worship Krishna. The person who enjoys drinking wine can slowly become Krishna conscious by appreciating that the Supreme Lord is the taste of their preferred beverage. As a form of intoxication, drinking wine has negative effects, but even the person falling in this way can find a way to remain connected to God.

If I know that pleasure won’t last in a particular engagement, that knowledge makes the activity less appealing. On the other hand, if I know that the enjoyment from something will only increase with time, it makes that something the most worthwhile venture to start. Fortunately, entrance into the eternal occupation of bhakti-yoga is quite simple. Just chant the holy names: Hare Krishna Hare Krishna, Krishna Krishna, Hare Hare, Hare Rama Hare Rama, Rama Rama, Hare Hare. 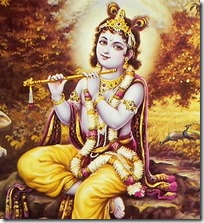 You may be from a specific religious tradition that doesn’t describe God as personal. You may have a vendetta against the person you think has wronged you for so long. You may not have any interest in philosophy. In bhakti-yoga the stress is placed on where the person is going, not from where they have come. As Krishna is nava-yauvanam, or ever fresh and new, the engagement that seeks to connect with Him gives continuously increasing returns.

In room with toys to play,

Then later on in closet to stay.

Interest not forever to stay.

Like Loading...
‹ Five Times The Universal Form Was Shown
Five Ways To Gauge How Your Bhakti Is Going ›