Home › the five › Five Reasons God Is Known As Hari

“Shrila Vishvanatha Chakravarti Thakura explains in this regard that the very word harih means ‘one who takes away.’ If one connects himself with Hari, the Supreme Personality of Godhead, the Lord takes away all his miseries, and in the beginning the Lord also superficially appears to take away all his material possessions, reputation, education and beauty.” (Shrila Prabhupada, Shrimad Bhagavatam, 8.19.32 Purport)

The Supreme Lord is unlimited. How, then, can He be described in a single word? One name will never fully suffice, as each name has its limits. The name Krishna is one of the more common forms of address, as it means “all-attractive.” It is often preceded by the word Bhagavan, which means a special personality who possesses full opulence in every important area simultaneously.

Another name is Hari. In the Vedic tradition, there are several terms that use this name, such as Hari-katha, Hari-vamsha, Hari-om, and kirtaniyah sada harih. As the word has several meanings, there is more than one reason why it is used for addressing the Almighty.

1. It is another name for Vishnu, the all-pervading one

As God is unlimited, He does not have only one form. Not that every divine being is God Himself, but for the one God, the personal aspect to the Divine, there are different personalities to whom worship can be offered. Hari generally refers to the form of Vishnu. Depending on the tradition followed, Vishnu is either taken to be the original or a non-different manifestation of the original. There is really no difference, as the identity is the same.

“Those who differentiate between the forms, qualities, pastimes, and characteristics of the incarnations of the Lord, such as Matsya and Kurma, will certainly be forced to enter the darkest regions of hell. Therefore, those who desire their own welfare always see Lord Vishnu’s names, forms, qualities, and pastimes as non-different from one another.”  (Madhvacharya, Gita-tatparya, 2.25)

Vishnu is all-pervading, which means that God is everywhere. Vishnu Himself expands into other forms to generate and manage the creation. He is the original purusha to go with the prakriti. He is the original spiritual being, who then has full control over the dull and lifeless matter.

The word Hari can mean “lion.” This meaning applies literally to Bhagavan through the avatara known as Narasimha. An infamous Daitya demon known as Hiranyakashipu had asked for boons that would give him ninety-nine percent immortality. Of course, this was only within the demon’s mind, as the wise person understands that even one percent mortality means that death is guaranteed to occur at some point.

The avatara of Narasimha exploited that one percent. He arrived at the appropriate time, just as the king was about to attack his own son, named Prahlada. Narasimha is a combination of man and lion. It was neither a beast nor a human being. The nails were the instrument of death, and so they were not a conventional weapon. Hiranyakashipu was killed on the lap of the Lord, which was neither on land nor in the air.

An incarnation of the eternal consort of the Lord once described her husband to be Narasimha. This was not in reference to the avatara who protected Prahlada. Rather this was simply a way to convey the lion-like nature of her husband, Shri Rama.

“I am faithfully engaged in the service of Rama, who is a lion among men [nrisimham], has a broad chest and powerful arms, who treads the earth like a lion and who is like a lion in prowess.” (Sita Devi speaking to Ravana, Valmiki Ramayana, Aranya Kand, 47.35) 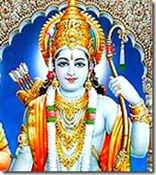 The recipient of these words from Sita was Ravana. He thought he was the king of the jungle of the material world, but as Sita correctly pointed out, he was more like a dog. He would run scared simply at the sight of Rama.

4. He takes away obstacles from a devotee’s path

Narasimhadeva didn’t just randomly create His form from the pillar after Hiranyakashipu struck it. The name Hari also means “one who takes away.” For the devoted souls there are many obstacles blocking success. There are already the three sources of misery with which to contend. Within the misery known as adhibhautika, the asuras especially cause trouble. They are against God. It is one thing to be atheist as a personal preference, but they go so far as to make sure no one else worships God properly.

Narasimhadeva descended from the spiritual world to give personal protection to Prahlada. He removed the greatest obstacle from the boy’s path. From there Prahlada could continue in his bhakti-yoga without issue.

5. He takes objects of illusion away from a devotee’s path

As Hari, God doesn’t remove only the obstacles that are obviously bad. He might even make the devotee poor, if that will be good for them in the long run. There is the famous incident with Narada Muni. Though he is a pure devotee, through the influence of yogamaya Narada once had a material desire. He wanted to marry this beautiful princess, who was set to choose her husband from an assembly of princes. Narada prayed to Hari to have his wish granted.

Another meaning to the word hari is “monkey.” As Vishnu is Hari, the Supreme Lord appeared to grant the wish by promising to give Narada a face just like hari. But the meaning was “monkey.” Naturally, after seeing Narada’s new face, the princess selected someone else. Narada was so angry that he cursed God to appear on earth and have to take the help of monkeys to regain the association of His wife. The Supreme Lord is never under the jurisdiction of a curse, but due to affection for Narada He agreed to the conditions.

The desire for marriage was illusion for Narada, and so in His role as Hari, Vishnu took that desire away. Worship of Hari is purifying, making it unique to all kinds of worship. It isn’t simply a business transaction. There is purification of consciousness along the way, with the removal of obstacles. The path is made clear for the eternal engagement that is bhakti-yoga.

For that offense I won’t forgive.

This curse I place upon you,

That without beloved will be you.

Just as my face you did make,

Help from monkeys you’ll have to take,”

Path for devotee by Him always protected.

Like Loading...
‹ Five Things That Rukmini Devi Teaches Us
Five Things To Know About The Marriage Of Shiva And Parvati ›