“And the highly valiant Rama shall soon obtain you, having killed Ravana, the king of the Rakshasas, along with his friends and family.” (Hanuman, Valmiki Ramayana, Sundara Kand, 35.79)

Shri Hanuman has many names. This is because he has done many amazing things. Also, his qualities are unbelievable. His being in the body of a forest-dwelling monkey is not the most amazing thing about him. His spotless devotion is what stands out. It is at a level unimaginable. The above quoted verse from the Ramayana is a perfect illustration.

One of Hanuman’s other names is Mahavira. This means “a great hero.” Hanuman earned this name through his journey to Lanka, in search of Sita Devi. She is the eternal consort of the Supreme Lord Rama. “Wife” is not entirely befitting her role. She certainly follows the dharma of service to her husband, which apparently starts at the time of the marriage ceremony in Tirahuta.

Sita Devi does not need any formality to be devoted to Rama. She always remains in contemplation of Him, thinking of ways to serve Him as well. She is interested only in His pleasure. That interest continues in every world, beyond the manifest one. She lives in the unmanifest realm with Him through her form of Lakshmi Devi, who is the goddess of fortune. Rama is with her in His form of Narayana, who is the source of all men.

Hanuman serves the beloved couple. That service is not limited to meditation. Dhyana, or deep contemplation, on God qualifies as bhakti-yoga, which is devotional service. Chanting the holy names is also a kind of dhyana. A person who recites the maha-mantra, “Hare Krishna Hare Krishna, Krishna Krishna, Hare Hare, Hare Rama Hare Rama, Rama Rama, Hare Hare,” on a regular basis is actually engaged in a kind of meditation. Regular hearing of the holy name also qualifies as bhakti-yoga. The idea is to find some way to connect with the Supreme Lord in a mood of love.

Nevertheless, without a section of brave people in society, the aggressors would dominate. Shri Hanuman had the difficult task of crossing over an ocean in search of Sita. She was taken one time against her will by the king of Rakshasas, Ravana. A Rakshasa is like a man-eating ogre. It’s a human-like species, but the people occupying that body type tend to have bad qualities.

Mahavira heroically reached Lanka and searched through it undetected, until he finally found Sita. In this verse from the Ramayana, he assures her that her husband, a descendant of King Raghu, will soon obtain her again. This will happen after Rama will kill Ravana. The friends and family of the Rakshasa king won’t be spared. Sadly, that is the result of having a wicked leader. The dependents share in the punishment received by the offender. 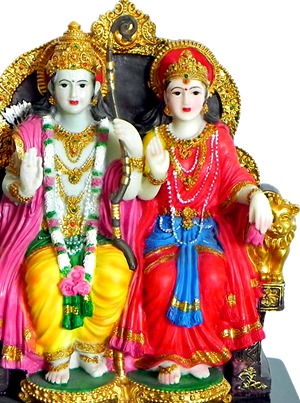 Hanuman is confident of this future because Rama is mahavirya. This means “highly valiant” or “very powerful.” Hanuman, as a servant of God, is His energy. Sita Devi is also His energy. Indeed, all living entities are sprung from the Supreme Lord, and so they represent His shakti, or potency. Rama is shaktiman, or the possessor of all potency. He is the energetic; hence the name mahavirya. Mahavira serves Mahavirya. Hanuman does so heroically, since he has full confidence that the highly valiant Rama will always protect him.

Hanuman with name of Mahavira so,

Since heroically to Lanka to go.

Mahavirya his object of service is known,

Great strength many a time by Him shown.

The energy of God working without fail,

Knowing that Rama’s side always to prevail.

Ideal use of whatever potency in me,

That Supreme Lord’s welfare to see.