“We have no control over these threefold miseries. They are controlled by Krishna’s maidservant, goddess Durga, who is material nature. She is not independent of Krishna. However, she is so powerful that she can create and maintain. Prakriti, nature, can be very unkind. Mother Durga is often portrayed as chastising demons by piercing them with a trident.” (Shrila Prabhupada, Teachings of Lord Kapila, Vs 8 Purport)

Pure bhakti-yoga is a unique style of worship due primarily to the lack of desire. The devotees of the Supreme Personality of Godhead are accurately described as akama. This means desire-less, but upon careful analysis, it seems like a mistake has been made. How can any person be without desire? Even the wish to become free of desires indicates the presence of a desire. If you want something, it means that you cannot be akama.

The devotees are akama in the sense that they don’t want anything for themselves. It’s natural to look to the heavens in times of trouble. Why wouldn’t we ask things from God, the Almighty one. In bhakti-yoga the prayer is to see the Supreme Lord’s pleasure always. Shri Krishna Chaitanya Mahaprabhu best exemplified the mood when He prayed to only be the servant of the servant of God in lifetime after lifetime, not caring about followers, beauty, or high birth.

“O Lord of the universe, I do not desire material wealth, materialistic followers, a beautiful wife or fruitive activities described in flowery language. All I want, life after life, is unmotivated devotional service to You.” (Lord Chaitanya, Chaitanya Charitamrita, Antya 20.29)

A helpful way to understand a complex concept is to juxtapose with the opposite. In this case, we can look at worship that is in kama, or with desire. The worship has to shift elsewhere, to someone who is not God Himself; the reason being that even with kama the influence of the Supreme Lord is so purifying that over time lack of desire is the natural result.

The worship of the devas is fit for comparison. This Sanskrit word means “gods.” To understand the difference to worship of God the person, the word deva can be translated as “demigod.” What exactly is demigod worship? How is it different from bhakti-yoga? We can think of it like visiting a store that carries a lot of cool stuff. We may not have the money to get the high priced items, but it doesn’t mean that the purchase itself is impossible. In a similar manner, the devas carry so many goods, like health, beauty, wealth, fame, and the like. The boons are ready to be received; just the proper worship is required.

One way that demigod worship is triggered is the basic response to power. Consider the drunkard who is causing trouble at a party. Due to the intoxication, they have lost good judgment. The more people tell this person to stop the disturbance, the more that person is inspired to continue. Suddenly, the drunkard runs into a very large person. This person, who doesn’t have to be an official bouncer, inspires fear, even in the drunk person. The drunkard immediately stops what they are doing; they leave. There is a response to power.

Durga Devi is shakti, or the potency in the material world. That power is symbolically represented in her trident. Just one look at that trident is enough to inspire fear. Those who don’t know the purpose to the material creation and how it runs in cycles due to the desire of the living entity to continue to enjoy separate from God become afraid of Durga Devi and the power she wields. Better to just worship her and avoid her wrath.

Indeed, even outside of Vedic culture there is a similar mentality. A God-fearing person makes the proclamation to separate themselves from those who flagrantly sin in the vain hope that there is no higher power watching. In the God-fearing there is recognition of a higher being, but the worship is still like a response to power.

Bhakti-yoga is worship of the powerful, and it is without fear. After all, Durga Devi works at the direction of the Supreme Lord, who is known by such names as Krishna, Rama and Vishnu. Durga Devi is herself a great devotee, so there is no reason to fear her trident, which represents the three sources of misery in the material world. There is no reason to fear her husband, Lord Shiva, either. Indeed, true devotees of Durga Devi and her family don’t look at them as mere order suppliers. 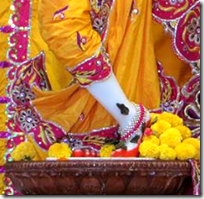 There is much more to be gained from this existence than temporary rewards. There is more progress to be made from the state of God-fearing. Instead of responding to the power of the gods, there is the bliss of surrender in knowing and feeling the unmatched love of the Supreme Lord. The representatives of Krishna reveal how to tap into that love and how to always keep it as time marches on.

Only when meeting power to stop.

Comparison to demigod worship made,

After defeated by nature to them prayed.

Bhakti when to powerful Himself going,

Service in love, no need for strength showing.

Like Loading...
‹ Five Amazing Powers Of The Spiritual Master
Was Everyone Doomed Prior To The Bhagavad-gita Being Spoken ›