“Intelligent human beings must always remember that the soul obtains a human form after an evolution of many millions of years in the cycle of transmigration. The material world is sometimes compared to an ocean, and the human body is compared to a solid boat designed especially to cross this ocean.” (Shrila Prabhupada, Shri Ishopanishad, 3 Purport)

“Did we really descend from monkeys? If so, why are monkeys still around? Okay, the fittest of the species evolved to something else later on. Fossil evidence shows the remarkable similarities in the changes that occurred over time. Still, have we seen a species suddenly grow an extra hand? If we’re going off visual evidence, at least there should be an experiment that provides proof. Science is observation and experiment, after all. It is not observation, theory, and then coerced mass acceptance of the theory, lest you be considered crazy.”

Fortunately, there is a way to get a clearer picture on the evolution debate, and it comes from a tradition generally considered to be religious. Sanatana-dharma, which is also known as bhakti-yoga and bhagavata-dharma, is the science of spirituality. Indeed, there are laws to the material nature, and those laws both include and are run by spirit. Studying different aspects of the spiritual science, we gain a better understanding of evolution.

These two combine to make every living thing that we see. Vedic teachings reveal the eye-opening truth of the changing of bodies and the universal similarity of species. Basically, everyone is the same on the inside. The trees are no different than the birds. The birds are the same as the fish. The monkeys are indeed identical to the human being.

If they are the same, why do they go by different names? I know that if I visit a certain region in India, the monkeys might steal my eyeglasses and run away. The trees won’t do that. The human beings likely won’t, either. The monkeys are different. So are the other species.

Prakriti accounts for the difference. The spirit inside is purusha. Spirit is unchangeable, and it cannot be killed. What we know as birth is the entering of purusha into a specific form of prakriti. Death is the same spark of spirit, purusha, leaving prakriti. It moves on to another form.

“As the embodied soul continually passes, in this body, from boyhood to youth to old age, the soul similarly passes into another body at death. The self-realized soul is not bewildered by such a change.” (Lord Krishna, Bhagavad-gita, 2.13)

The soul can evolve into different species. It can move from one set of clothes to another. The clothes themselves don’t evolve. What is described as evolution is really a kind of travel. The elements to create the different bodies have always been there. Both prakriti and purusha come from the original spirit soul, who is the origin of everything in fact.

2. I can’t make my offspring grow an extra hand if I tried

There is simply no way for me to do this. The failure indicates a defect in prakriti. If I need some more living space in my home, I can add an extra room. Taking raw materials and then applying work, the new room appears.

The same can’t be done with the living beings. There is no way for me to guarantee that the people coming in future generations will be a certain way. I want my children to be smarter and more capable than me, but I am at the mercy of nature to decide. Progress is not always there, even if the original species is considered fit. Again, the science of spirituality explains this, as every living being is a combination of prakriti and purusha.

3. We have visual evidence of the misery in the human species

The foundation of the evolution theory is that there is advancement towards a “fitter” species. Yet we see so much suffering in the human being. They get weighed down by daily pressures. There is indulgence in intoxication in order to remove the influence of the senses; albeit only temporarily. There is so much anger that nations go to war, even if they have everything they need to live comfortably. There is suicide, also.

The trees don’t have these problems. The fish are so less advanced in intelligence that they don’t even know what water is. If the human being is more fit, why is there increased misery? This fact alone invalidates the theory that the type of matter assumed is an indicator of fitness.

Vedic teachings say that real evolution is in terms of potential for intelligence, and more specifically, the ability to be conscious of God. The more one connects with Him, in what is known as yoga, the more happy they become. Bliss, or ananda, is the barometer for fitness. The human being is indeed the most advanced, but without meeting the destiny of spiritual awareness, it is no further along than the animal.

4. Evolution is of the spirit soul

The laws of material nature run on intelligence. They are so predictable that if there is the slightest deviation for a period of time, man thinks that he alone is responsible and that he can change the situation. Intelligence is programmed into nature by an intelligent being. We have no evidence of randomness leading to intelligence. The smartphone, the automobile, the physics class – none of these run on randomness.

And so there is intelligence to evolution, which occurs for the individual soul. The intelligence is there in the law of karma, which is inherently fair. Karma dictates where the individual soul will go next. Karma is fruitive activity. There is some independence granted to the living being, and how they behave creates future consequences. The lower species are like temporary stops along a lengthy journey towards the final destination.

“One who knows the transcendental nature of My appearance and activities does not, upon leaving the body, take his birth again in this material world, but attains My eternal abode, O Arjuna.” (Lord Krishna, Bhagavad-gita, 4.9) 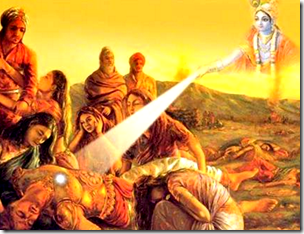 The human body is meant to be the final destination, but there is no guarantee that rebirth will stop from there. The person who is spiritually aware at the time of death gets escape from the cycle of birth and death. No more prakriti for the purusha who is connected to the Supreme Lord.

5. The last stage is to understand things properly and be situated in peace

The human being can find peace, even before death. The proper understanding of things brings some relief, as there is no longer so much concern over the future. The laws of nature operate regardless of our awareness of them. Karma handles fairness, and so we can shift our attention to remaining always aware of the origin of all species.

Since He is a person who is all-attractive, one of His names is Krishna. The real science behind evolution is explained in books such as the Shrimad Bhagavatam and Bhagavad-gita. The topic is important, but it is not the most necessary thing to know. Rather, if a person understands that there is a God and that He is the best friend of everyone, the supreme proprietor, and the person to whom all activity should be dedicated, then they can achieve peace. Peace is the real boon of a human birth, a birth that is difficult to achieve but auspicious once it comes about.

Difficult, after so much time achieved,

But auspicious when human birth received.

Fittest since potential for intelligence high,

Not for any other reason why.

Intelligent being in background most important to know,

His loving nature, as our best friend with us to go.