Home › the five › Five Hallmarks Of A True Saint

Five Hallmarks Of A True Saint

“Prahlada Maharaja continued: My dear father, please give up your demoniac mentality. Do not discriminate in your heart between enemies and friends; make your mind equipoised toward everyone. Except for the uncontrolled and misguided mind, there is no enemy within this world. When one sees everyone on the platform of equality, one then comes to the position of worshiping the Lord perfectly.” (Shrimad Bhagavatam, 7.8.9)

The Rakshasas from the time of the Ramayana had special abilities. One of them is the kama-rupa siddhi. Take any form you choose. Become invisible when you want. It’s a neat trick to pull every now and then, but the Rakshasas were of bad character, too. They used the ability to change shape at will to attack innocent people, kill them, and then eat their flesh.

Rakshasas are a cannibalistic, human-like species. Another ability they had during the time of Ravana’s reign in Lanka was displaying ghastly images. Something like apparitions, the man-eaters would show an illusory image to break someone’s will. Of course the person seeing it wouldn’t know that it was fake.

These abilities shown today would be categorized as miracles. After all, who can change their shape so quickly? Who can appear and disappear from sight at will? Yet from the Rakshasa example we see that such abilities alone do not make a person saintly. The supposed miracles are merely manipulations of the material energy. To find a true saint, there are certain characteristics to look for.

This shouldn’t be necessary to say, but you can’t be a saint unless you like people. This is pretty easy to understand. A miser hoards their wealth and will not part with even a penny unless there is some personal interest to be furthered. The angry person is always upset at having their desires unfulfilled. Whoever gets in the way is thus an enemy.

A true saint likes people. They see that everyone is struggling through the same material existence. One person may be rich, another may be poor, but they are the same on the inside. Just the externals are a little different.

2. Compassion extended to everyone

The leader of the Rakshasas in Lanka during that ancient time had some affection, as well. It was not that he was angry and vindictive to everyone. He cared for his brothers and sisters. Even the most brutal dictator of modern times has some affection.

A true saint extends compassion to everyone. They don’t have enemies in the true sense. Prahlada Maharaja says that the only enemy in this world is the uncontrolled mind. A saintly character himself, Prahlada did not consider his aggressive and demoniac father to be an enemy. The father tried to kill the boy many times, simply because of devotion practiced to God. Prahlada did not take offense, as his mind was controlled.

3. Understanding the spiritual equality of all beings

There are no friends and enemies in this world; just other living beings going through the same cycle of birth and death, repeated until there is perfection in consciousness. The true saint doesn’t even have enemies in the animal kingdom. A snake is dangerous to be around. So is a tiger. The wise person will not behave carelessly, but they still don’t hold anything against animals, who are simply acting according to their nature.

“The humble sage, by virtue of true knowledge, sees with equal vision a learned and gentle brahmana, a cow, an elephant, a dog and a dog-eater [outcaste].” (Lord Krishna, Bhagavad-gita, 5.18)

There is spiritual equality. The tiger, the cow, the dog, the infant, and the adult human being are all the same on the inside. They are spirit soul, part and parcel of the total spiritual energy known as Brahman. The saint is thus compassionate towards all-creatures. They don’t protect one group of animals and cut the throats of another group simply because the flesh tastes good.

4. Giving to people an eternal engagement to bring happiness

You see a hungry person. You give them food. You see a poor person. You offer them money. You see a sick person. You bring them to a hospital and arrange for medical treatment. These are signs of compassion, a loving heart.

The true saint goes beyond basic good deeds and brings to the individual a way to find happiness. That way is an eternal engagement, something that never has to be given up. Even after death, the engagement continues. There is a steady source of nectar always flowing, transcending birth and death.

Of course there is only one eternal engagement. It is known as sanatana-dharma in Sanskrit. The English word “religion” is a good equivalent, but still not completely accurate. It is in the soul’s nature to serve, and the only service that can go on forever is towards the Almighty, the origin of everything, the one without a birth. The saint can bring this engagement to others since they practice it themselves. Their compassion towards all creatures is an extension of that service.

This one looks rather difficult to accomplish. Though the true saint is a messenger of the Supreme Lord, always engaged in devotional service, they appear and disappear. After all, even God Himself doesn’t stay in the manifest form before the eyes forever. He appears whenever there is a decline in religion and a rise in irreligion.

The saint is so beneficial to me. They teach me how to stay connected with God the person. In this age they show me the way through the chanting of the holy names: Hare Krishna Hare Krishna, Krishna Krishna, Hare Hare, Hare Rama Hare Rama, Rama Rama, Hare Hare. I rely on their association. I feel like I can’t live without them. 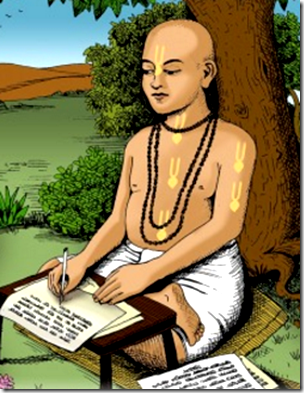 The true saint is so kind that they ensure their association stays going forward. They find a way. They may author so many books, with philosophy so rich and profound that simply reading a page keeps the mind properly occupied for an entire day. They may record many lectures given through their extensive travelling. The sound can then be repeated either electronically or through consulting the written word. Even if all they have left is a few instructions, through consistent practice in bhakti-yoga, those instructions never leave us; they have a life of their own. The saint is the embodiment of compassion and sacrifice, and there is no way to pay them back for what they offer the world.

Not just from a miracle to show,

To everyone compassionate and kind,

Knowing that only enemy the uncontrolled mind.

A spirit soul even the cow treating,

With loving heart every being greeting.

To maintain their association finding a way.