Five Reasons To Quote From Shastra When Discussing Spiritual Topics 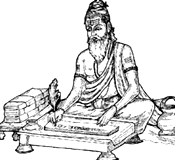 “Arjuna said: You are the Supreme Brahman, the ultimate, the supreme abode and purifier, the Absolute Truth and the eternal divine person. You are the primal God, transcendental and original, and You are the unborn and all-pervading beauty. All the great sages such as Narada, Asita, Devala, and Vyasa proclaim this of You, and now You Yourself are declaring it to me.” (Bhagavad-gita, 10.12-13)

Along with politics it is one of the more volatile subject matters for discussion. Civil conversation can turn into a heated argument rather quickly. There is strong sentiment, after all. There is risk of offense even with the most benign comment.

“How dare you say your god is superior? It is amazing that you are still able to speak, that your tongue continues to function, after you have insulted the goddess in that way. You are the greatest sinner. You will reap the ugly reward for your attitude. The other gods are not servants to yours. You know nothing about the culture of which you speak.”

When discussing spiritual topics that are comprehensibly explained in the Vedic tradition, the protocol is to quote from shastra, which is scripture. In fact, the words coming down from the ages are the basis for discussion. They stimulate thoughts, helping the spirit inside to regain its original occupation, the eternal engagement that is devotional service.

We know of shastra because it has been passed down. We were not alive when the ancient books were first written down. Indeed, the Vedas are known as the shrutis, which means “that which is heard.” It is an aural tradition. The written word came later on, as man’s memory capacity diminished. The Vedic view is the opposite of the mentally concocted one of modern science and research. The abilities in man diminish with the passage of time. What we see as advancement today is actually regression; becoming more and more like the animals.

The bona fide spiritual teachers who came before us quoted from shastra regularly. They were not mere stenographers or messengers without any personal input. They wrote a lot. They commented extensively. But everything was based on shastra. They did not make up anything.

The human being is constantly discovering. The process starts at infancy. How can a person who was once in diapers ever say they are all-knowing? Whatever knowledge they have has been acquired. The easiest way to acquire knowledge is the descending process, where the valuable information is passed down from others.

Quoting shastra validly establishes authority. Any person can say anything, after all. I can tell people that it’s going to rain outside. They see the bright sun and think otherwise. I am later proven correct because I used the authority of the weather bureau. They put out the report and I simply passed the information along.

In an argument about what is spirit, what is supreme spirit, who is the ultimate controller, what happens after we die, what is my true identity, what is the form of the Divine – establishing authority is essential. Shastra helps to do that. In fact, without quoting a higher authority, the exercise is something like trying to guess what paintings are on the wall after entering a dark room, with the lights off.

3. It goes beyond mental speculation

The mind is a material element; a subtle one. The individual is spirit soul. In this world they are covered up by gross and subtle material elements. A scientist can spend years and years to reach the same conclusion. They may not have the same terms for the individual aspects, but the concepts are the same. The easier way is to consult the authority of Shri Krishna.

Quote from the Bhagavad-gita to establish your authority. This goes beyond mental speculation. The sentimentalism that leads to fanaticism and sometimes to extreme anger and violence are all without authority. Any person can have a preference towards anything. With mental speculation, one person’s opinion is as good as another’s. There is no authority. Shastra is above the defects of the material mind, as it is composed by realized souls who themselves referenced higher authorities.

From the authority of the Bhagavad-gita, which is a single source sufficient for referencing in discussions on the highest truths of life, we learn that Shri Krishna is Bhagavan, which His Divine Grace A. C. Bhaktivedanta Swami Prabhupada translates as “Supreme Personality of Godhead.” Others may take offense to this. They have their own god that they worship. They may have a different religion that they inherited at the time of birth.

“It is said that the soul is invisible, inconceivable, immutable, and unchangeable. Knowing this, you should not grieve for the body.” (Lord Krishna, Bhagavad-gita, 2.25)

Shri Krishna Himself references authority in the discussion with the warrior Arjuna. The Supreme Lord follows etiquette. He knows that it is the tendency of man to mentally speculate. He understands that any person can say anything. Therefore He references the Vedas, which are non-different from Him. He makes reference to other wise souls, people who themselves quote shastra.

Of course there is further proof of Krishna’s divinity. At one point He shows the universal form to Arjuna. The virata-rupa is the complete everything from the manifest world. Beyond the manifest is the unmanifest, which is difficult to understand while a living being is embodied.

“For those whose minds are attached to the unmanifested, impersonal feature of the Supreme, advancement is very troublesome. To make progress in that discipline is always difficult for those who are embodied.” (Lord Krishna, Bhagavad-gita, 12.5)

Still, showing everything that is known to exist in a single image is enough proof of Krishna’s divine status. After seeing this amazing form, Arjuna went into great praise of Krishna. He described the charioteer, friend and cousin to be the god of gods, deva deva. He said that Krishna was the supreme pure, pavitram paramam.

Following etiquette we can simply quote Arjuna when teaching about the form of God, and how He is with two hands and all-attractive. We need only reference the Bhagavad-gita. Despite having the incontrovertible evidence in front of him, Arjuna made sure to still reference other authorities. He said that great sages like Devala, Asita, Narada and Vyasa all agreed; they came to the same conclusion. The most cultured disciple, who had the most direct experience with God, himself quotes from shastra and great personalities.

Against your opinion I’ll fight.

What exactly do you know,

Why if you say then it is so?”

Flawed as material element is the mind,

Etiquette in Arjuna and Krishna too to find.

Like Loading...
‹ Where Do You Draw The Line Between Vairagya And Bhakti
Five Signs That Even Krishna’s Anger Is Auspicious ›