Home › the five › Five Fraternal Relationships From The Ramayana

Five Fraternal Relationships From The Ramayana

“O Lakshmana, do you rule this earth with Me. You are like My second self, so this glorious opportunity has been presented to you as well. O Saumitra, do you enjoy all the pleasures you desire and the fruits of the regal life. My life and this kingdom I covet for your sake alone.” (Lord Rama speaking to Lakshmana, Valmiki Ramayana, Ayodhya Kanda, 4.43-44)

There’s really nothing like it. A friend for life. No way to explain it to someone else. It’s a bond that got created at some time, automatically, without effort. You would give your life for that person, and they for you. You want nothing but happiness for them. Though you have rivalries from time to time, though the arguments may escalate to the point of physical conflict, deep down there is great affection.

This gift is the brother. If it’s the elder, then you have known them your entire life. In the reverse situation, you have seen them since they emerged from the womb. But how should the relationship be? What is ideal? In Sanskrit there are two significant words in this regard: agraja and anuja. Both are used in the famous Ramayana.

The main character of the historical work of epic length is often described as Lakshmana-agraja. Shri Rama is the eldest of four brothers. As agraja, He is the first, who is the leader of the others. Lakshmana is one of the younger brothers, and another name for Him is Ramanuja. He is the devoted follower of the elder. There are several fraternal relationships in the Ramayana, and the mood between the brothers is not always the same.

The Ramayana describes that the four brothers essentially split up into pairs soon after birth. They appeared in the royal family in Ayodhya, sons to King Dasharatha, the current spotless leader in a line that traced all the way back to King Ikshvaku, who is mentioned in the Bhagavad-gita.

Rama and Lakshmana were always together, and Bharata and Shatrughna inseparable. There still wasn’t any rivalry; Rama was the heart and soul of everyone in the town. The relationship with Lakshmana was unique because the association couldn’t be broken. Rama reciprocated as well, as He is the Supreme Personality of Godhead in an incarnation form. Lakshmana himself one time described Rama as grateful.

“I am His younger brother, Lakshmana by name. Due to His transcendental qualities, I have taken up service to Him, as He is grateful and very knowledgeable.” (Lakshmana speaking to Hanuman, Valmiki Ramayana, Kishkindha Kand, 4.12) 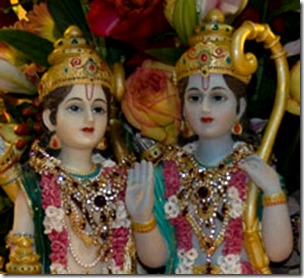 When the honor of king descended to Rama, the first thing the Lord did was to offer a share of it to Lakshmana. The younger brother returned the favor by later insisting on accompanying Rama to the forest for fourteen years. Lakshmana would not eat or sleep unless Rama had done so first. That younger brother is the embodiment of the guru, who in spirit behaves the same way with God. Lakshmana is Rama’s number one defender, as are the spiritual masters whom he inspires.

Bharata was not always by Rama’s side, but the level of devotion was the same as the other brothers. Rama left for the forest while Bharata was away on business. When he returned home, Bharata was mortified upon learning how everything went down. It was because of his own mother’s jealousy that Rama was kicked out of the kingdom. The eldest son’s departure was too much for Dasharatha to bear; he left his body soon thereafter.

Bharata was now the ruler of the kingdom, supposedly, but without a father. His heart and soul, Shri Rama, had left as well, taking Lakshmana and the wife Sita. Bharata found Rama in the forest and tried his best to change the situation. Bharata’s words were so endearing that Rama agreed to rule the kingdom by proxy for fourteen years; through His sandals. Bharata refused to live as a king. He remained in a hut and worshiped those sandals day and night. As Goswami Tulsidas mentions, so many people served Rama for a specific purpose, to get something in return. Bharata was the one who gave up something, embodying the spirit of full renunciation.

Things don’t always go well between brothers. They should look out for each other, but in the material world uncontrolled sense gratification can quickly lead to wrath. From wrath there is loss of intelligence. In the case of Sugriva and Vali, a misunderstanding essentially ended their relationship.

Vali was the king of the area in the forest known as Kishkindha. Of a monkey-type body, Vali was still incredibly strong. His fight with a foe one time led him into a cave. Sugriva was standing guard outside. Mistakenly thinking that Vali had died, Sugriva decided to close up the entrance to the cave. This would keep the enemy out.

Vali had in fact emerged victorious, and when he found out about the closed entrance, he became incensed. He pushed his way out and accused Sugriva of trying to kill him for the purpose of taking over the kingdom. Sugriva then essentially ran away in fear. He would have been killed were it not for the safe space of Rishyamukha. Vali was prevented from entering that area due to a curse previously applied to him by a sage.

This serious rivalry would soon see the Supreme Lord step in. Rama made friends with Sugriva in the forest, and for the devotees God will do anything. Sugriva needed his kingdom back, and so Rama shot Vali while the two brothers were engaged in a fight. This goes against the conventional rules of warfare, but for God there are no rules. He is not beholden to karma, and neither are those surrendered to Him. Vali was still benefitted, as he was killed directly by God. He saw the beautiful face of Shri Rama at the moment of quitting his body.

Thus far two pairs of brothers of the human race and one pair in the monkey kingdom. There is another pair of note who are from the Rakshasa race. These are also like human beings, but much more sinful in nature. They are like ogres, known especially for consuming human flesh.

The Rakshasas ruled over the island of Lanka, and the leader was Ravana. The ten-headed one of the terrifying scream, Ravana used his amazing strength for evil. He was always intoxicated, ate loads of animal flesh, and had so many beautiful wives. Yet as is known to the wise, kama is never fully satisfied. The more one scratches the itch, the greater the intensity of the desire upon reemergence.

Vibhishana was pious from birth. He was not like the others in Lanka. He was still very affectionate to his elder brother Ravana. While so many advisors were there to tell Ravana what he wanted to hear, Vibhishana tried to set the king straight. Ravana committed the worst mistake in taking Sita away from Rama in secret, without fighting for her. Vibhishana advised Ravana to return Sita to Rama. Ravana didn’t listen, and so Vibhishana left the kingdom and went to the side of Rama. He was a key player in Ravana’s ultimate defeat. Though a traitor by normal estimation, Vibhishana ended up doing the most good for his brother.

Humans, monkeys, Rakshasas. We can add birds to the list. Jatayu was extremely heroic. When Ravana went to the forest of Dandaka and took Sita away in secret, the lone opposition he met was Jatayu. As Ravana was flying away in his aerial car, Jatayu put up a fight. Unfortunately, it was a losing battle. His wings clipped, Jatayu fell to the ground. As he lay dying, he eventually met eyes with Rama. The devotee who paid the ultimate sacrifice received the ultimate benediction of seeing Rama’s beautiful face as he departed for the next life.

Jatayu’s brother Sampati would also be of tremendous service. After Sugriva regained his kingdom, he dispatched his massive army to search the globe for Sita’s whereabouts. The leading group went past the allotted time. Without success, they were ready to give up. While talking amongst themselves, the bird Sampati overheard from above. He was ready to eat them until he heard Jatayu’s name mentioned.

Sampati then became a great friend to the group, informing them that Sita was on the island of Lanka. He was greatly saddened to hear the news of Jatayu, but he still managed to pay honor to the brother. Jatayu would have been extremely happy to know that his brother played a role in Ravana’s eventual demise.

Thus the Ramayana gives us several kinds of relationships between brothers, each unique in their own way. The tie binding them together is the Supreme Lord. Everything in the material world is like a zero. You can keep accumulating them, but you’ll still always have zero. God is like a non-zero digit. As soon as you add Him, the zeroes become something of value. The same applies for relationships and friendships. When Shri Rama is at the center, the brother, the father, the mother, the sister, the child – the relationship with them becomes much more meaningful.

Brother gift from God is he,

Best friend naturally can be.

All bonds whole when God at the center.

Like Loading...
‹ Five Reasons To Have A Marriage In Dharma Instead Of Kama
Five Things That Make A Person Smart ›