“Therefore get up and prepare to fight. After conquering your enemies you will enjoy a flourishing kingdom. They are already put to death by My arrangement, and you, O Savyasachin, can be but an instrument in the fight.” (Lord Krishna, Bhagavad-gita, 11.33)

Friend2: They went through a lot.

Friend2: Such a chance occurrence that he escaped. While he was unconscious at the bottom of the lake due to the poison, snakes started biting him. That actually neutralized the poison, allowing him to wake up and save himself.

Friend1: Then Duryodhana tried to have them burned in the house of shellac. 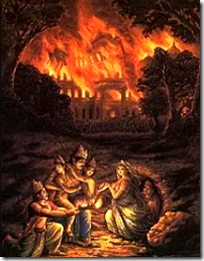 Friend1: But really the hand of God. Narayana, the Supreme Lord, there with them in spirit. Sometimes by their side physically in the form of Shri Krishna.

Friend2: The compassionate cousin who is actually the well-wishing friend of every living entity.

“The sages, knowing Me as the ultimate purpose of all sacrifices and austerities, the Supreme Lord of all planets and demigods and the benefactor and well-wisher of all living entities, attain peace from the pangs of material miseries.” (Lord Krishna, Bhagavad-gita, 5.29)

Friend1: Alright, so my question is about Krishna being there and not helping out more.

Friend2: You want to know how such bad things could happen to people that are supposedly protected by God?

Friend1: I think we’ve discussed that before. I know that just because you take up bhakti-yoga, devotional service, it doesn’t mean that everything will always go your way.

Friend2: Exactly. There are several reasons for this.

Friend1: One is the residual effects of fruitive activity, karma. Like the electric fan that you turn off. It still spins for a while before stopping completely.

Friend2: Another way to think of it is doing something wrong and having the effect manifest later on. I forgot to pack my wallet on this weekend trip. I won’t suffer the consequence until I actually have to pay for something, which may not happen for a day or two.

Friend1: And the other reason is that the modes of nature still act?

Friend2: Yes. Just because you are practicing devotion doesn’t mean you won’t be subject to the basic miseries of life, like those coming from the heavens. You’ll still have ups and downs mentally. The idea is that the end result is different.

Friend1: And sometimes the bad times test you, right?

Friend2: For sure. They help to make your devotion stronger.

Friend1: Okay, so what is the exact cause in this specific case, where the land was taken from the Pandavas? Their father Pandu was the king. Upon his passing the sons should have gotten the kingdom. Instead, Dhritarashtra allowed his sons, led by Duryodhana, to illegally take control.

Friend2: And you want to know what caused all of this?

Friend1: Forget the cause for a moment. Why didn’t Krishna intervene? Why didn’t He just take the land back for the Pandavas? He is the supreme proprietor, after all. Everything belongs to Him originally. He was there. It’s not like He was back in the spiritual world. He had already overthrown one evil king, His maternal uncle Kamsa. Why didn’t He do the same with Duryodhana?

Friend2: I like this question. It seems logical enough. There is already precedent set. Do you know that Krishna discussed this idea with Duryodhana?

Friend2: Yes. Just prior to the great war to settle the matter once and for all, Krishna made one last attempt at peace. He visited Duryodhana as a messenger. The moron decided that instead of talking he would try to tie up Krishna. This way the Pandavas would lose their will to fight.

Friend1: I do remember this now. Krishna showed Duryodhana a version of the universal form, the virata-rupa.

Friend2: Yes. He basically said, “If you want to bind me, go ahead. But you’ll have to bind the entire creation, because that is one way to understand who I am.”

Friend2: Krishna easily could have taken the land back, but He didn’t want to get involved in that way. People would blame Him for interfering in matters that didn’t concern Him. Instead, He accomplished the same through the fearless devotion of Arjuna and his brothers. Krishna urged Arjuna to act as the instrument.

Friend1: Essentially, Krishna did take the land back, but was so kind that the credit went to Arjuna. 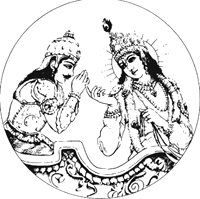 Friend2: That is part of God’s nature. The same situation with Hanuman, who bravely crossed the ocean to reach Lanka and find Rama’s missing wife Sita. Shri Rama, who is the same Krishna but in a different incarnation form, could have easily accomplished the task Himself. But that would mean Shri Hanuman wouldn’t be as famous or revered today. Rama wanted to glorify Hanuman, and in the same way Krishna wanted to increase the fame and glory of His great devotee Arjuna.

Arjuna as warrior made a name,

Krishna to increase that fame.

So allowed as instrument to act,

With swift arrows of aim exact.

To get back land illegally taken,

By Duryodhana of dharma forsaken.

Easily work of entire world can do,

But allowing others for glory too.