Three Reasons Demons Are Afraid Of The Universal Form

“When Arjuna saw the universal form of the Lord, the demigods took pleasure in it, but others, who were demons and atheists, could not stand it when the Lord was praised. Out of their natural fear of the devastating form of the Supreme Personality of Godhead, they fled. Krishna’s treatment of the devotees and the atheists is praised by Arjuna.” (Shrila Prabhupada, Bhagavad-gita, 11.36 Purport)

A friend and charioteer turned spiritual guide. The well-wisher to Arjuna and his family of brothers and their mother, Shri Krishna accepted the responsibility for the bow warrior’s welfare right when he desperately needed help.

That Krishna is a perfect guru is not surprising. He is the adi-purusha, after all. This means the original person. The parampara, or disciplic succession, begins with Him. Krishna chooses worthy disciples to receive the highest wisdom, trusting that they will pass it on to future generations, applying the same discretion.

Taking the role of guru was one thing, but Krishna went one step further. On that famous day on the battlefield of Kurukshetra, Arjuna saw his teacher transform into the virata-rupa. One English translation is “universal form.”

In yoga there is the potential to earn a siddhi, or perfection, that allows the changing of rupa, or form. This is known as the kama-rupa siddhi. The virata-rupa is something different. The vision can only be displayed by the person who is that form and more. It cannot be mimicked.

Though the vision was specifically for Arjuna’s benefit, since it was so vast and expansive, others could see it as well. The demigods, who are on the side of God, took great pleasure, while the demons were in great fear. The Sanskrit word asura is a negation of the word that describes the demigods, so the inverted nature of the reaction is not surprising.

1. They know they are not on the righteous path

Two children are sitting in a classroom in school. It’s the early morning and the teacher has yet to arrive. One child is calm and at peace, while the other is a nervous wreck. There is a homework assignment due. The first child has completed it, while the second has not.

A similar situation is where the police arrive at a particular area. In conditions where law enforcement is honest and trustworthy, the law-abiding citizens have no reason to fear. The arrival of the police is cause for alarm for those who constantly break the law.

The asuras can be thought of in the same way. They are atheists by definition since they go against God. They see the influence and existence of the Divine everywhere, but intentionally ignore it. When they see something amazing like the virata-rupa, they understand the raw power in Shri Krishna and how that can be used to punish those who have infringed upon the life and property of others.

2. They know that punishment will come eventually

There is the saying, “A guilty conscience needs no accuser.” Even the most obstinate person deep down understands there is a higher power. If something unpleasant happens to them in the future, they may reflect as follows:

“Well, I had it coming. I could only get away with stuff for so long. I was playing with fire. I didn’t get caught, so I thought I could keep going. Justice was able to catch up with me eventually.”

The virata-rupa is the visible manifestation of that justice. Asuras are found everywhere in a material existence. They may even rule the planet, as when Hiranyakashipu and Ravana rose to power. Duryodhana wasn’t exactly a direct descendant of the species of asuras, but he had the same mentality. He was ruling the kingdom of predominating force in the world when the virata-rupa became visible on the battlefield.

3. They are against God

This is the fundamental cause. The word asura is translated as “demon” for a reason. The worst people are against God. Not that they are innocent and only lack clarity on the issue. They have made their decision. Without a controlling authority at the highest level, man is left to live by the law of the jungle. Kill or be killed. Win or else let someone else dominate. 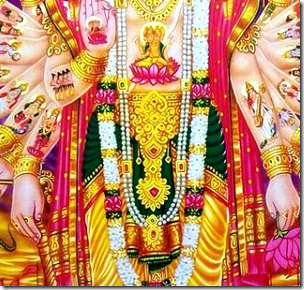 From Arjuna’s reaction we see that there is no reason to fear. Shri Krishna is all-merciful. Even His punishment of the antagonistic atheists is for everyone’s benefit. The demons see God in the ferocious form of all-devouring time, and for the devotees the path to practice devotion is cleared. In essence, everybody wins.

To devotees a vision most dear,

For asuras a reason to fear.

Against God down at the core,

Arjuna saw and was glad at heart,

Others quickly in terror to depart.

Like Loading...
‹ Five Excuses I Make To Avoid Bhakti
Five Things Which Give Impetus To Ecstatic Love Of Krishna ›