Three Times There Was No Reward For Loyal Patronage

“When Indra understood that the sacrifice offered by the cowherd men in Vrindavana was stopped by Krishna, he became angry, and he vented his anger upon the inhabitants of Vrindavana, who were headed by Nanda Maharaja, although Indra knew perfectly well that Krishna was personally protecting them.” (Krishna, The Supreme Personality of Godhead, Vol 1, Ch 25)

You visit this store often enough that you know the people who work there. They are on a first name basis with you. It’s not quite to the level of saying, “Norm,” when you walk in the door, like in the television sitcom Cheers, but there are smiles all around for sure. You ask each other how everything is going.

Such a relationship is mutually beneficial. The store wants repeat customers. The goal is to make sales, which lead to profits. If customers return on a regular basis, there is some stability to the cash flow.

The customer is benefitted by hopefully getting good deals. Perhaps they are made aware of new inventory prior to the general public knowing. At the very least, they can trust that the people making the sales are being straightforward and honest.

Not required to reach as far as personal familiarity, there is the concept of the customer loyalty discount. In the retail world this is very common. Give someone a rewards card. More purchases equate to more points, which then bring discounts. The idea is to reward customer loyalty, in a formal and organized way.

In spiritual life the equivalent of a business transaction is the interaction with devas, or demigods. There is proper payment in the form of austerity and worship, and there is the good or service provided in the form of a benediction.

As demigod worship is still on the material platform, there are defects. Though the people approached are divine figures, sometimes even the reward for loyalty is lacking. Past sales are no guarantee of insulation from hardship.

Asura is a Sanskrit word that is essentially a negation of the word that means demigod. The word for the heavenly figures is sura, and they are known to be of good character. The suras are in the mode of goodness, which is equivalent with qualities like knowledge, forbearance, austerity, and patience. Most importantly, the suras understand that there is a supreme authority figure, the highest power controlling every other controller to some degree.

The asuras have all bad qualities, and Vrikasura is a wonderful example. He approached a god, the great god in fact. Mahadeva is known to be easily pleased, and so Vrikasura eventually earned his favor. Vrikasura had undergone tremendous austerities and Mahadeva was ready to grant any boon asked.

Vrikasura requested the ability to kill any person simply by placing his hand on their head. Just as with the business transaction, there were no further questions asked. Both the sinner and the saint are allowed to purchase the smartphone. There are no character judgments made. There is no questionnaire to fill out, asking how the product will be used going forward.

Vrikasura showed his true demon-self by not giving any loyalty to the person who granted him the boon. He immediately went chasing after Shiva, hoping to touch his head and kill him. Vrikasura wanted the beautiful goddess Parvati for himself. She is the most chaste lady, and can only be the wife of Mahadeva. For everybody’s benefit, Vishnu arrived on the scene in disguise and tricked Vrikasura into killing himself by use of the hand on the head.

He was a Rakshasa, which is a worse kind of asura. Rakshasas descend so low that they will eat other human beings. Ravana earned his name from the same Mahadeva, who heard the Rakshasa’s terrifying scream one time. That incident led Ravana to become a great devotee of Mahadeva. 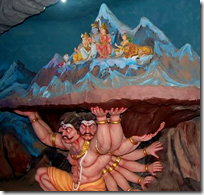 Again, the reward for customer loyalty was lacking. This time it was on both ends. Ravana paid no attention to Mahadeva’s desire. Lord Shiva is known to be a great devotee of Vishnu in His form of Shri Rama. Ravana offended Rama greatly by stealing the Lord’s wife Sita in secret and keeping her hidden, far away. By extension, this was also a great offense to Shiva.

When Rama approached Lanka to take Sita back, Mahadeva did not interfere. Ravana received no help from the person he was supposedly greatly devoted to. This is because devotion to Vishnu is spiritual. Material transactions from the past had no influence on Mahadeva’s disposition. He wanted Rama to triumph, not Ravana.

In this situation we have a sura turning into a great aggressor. Indra became an attempted mass-murderer. He tried to kill innocent people who were loyal to him for so many years. One time Vishnu as Shri Krishna convinced the residents of Vrindavana to worship Govardhana Hill instead of Indra.

From being ignored a single time Indra became outraged. There were so many past dealings with the same people, with reciprocal benefits. That past patronage was rewarded with a devastating rainstorm, intended to wash everyone away. Krishna saved the day by lifting Govardhana Hill and turning it into the world’s largest umbrella for seven days. 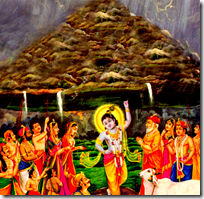 These incidents teach that interaction with God the person is different. It is not like a business transaction. A person can try the same with Krishna, but the result is not guaranteed. God is not compelled to give anything to anyone. In fact, He might take things away from those who are most dear to Him. He does whatever will bring the best long-term benefit, shreyas. Such discrimination represents tremendous mercy, the likes of which only the supreme deity can offer.

So frequently to store to go,

That first name of workers to know.

Some benefit expecting each side,

Repeat business, information from inside.

In demigod worship sometimes not there,