The Temple Of The Mind

“The wise who have wanted to know have understood that all regulative principles are meant to lead to one result – having Shri Rama standing in the temple of the mind, holding His bow and arrow.” (Dohavali, 90)

It’s not surprising to see so many rules and regulations in spiritual life. The outsider sees many of them as pointless. Why stay home from work on a given day? Is wearing a specific hat going to bring any real benefit? Why intentionally starve yourself for a period of time? Nutrition is important; the body needs proper fuel in order to operate optimally. Each rule of spiritual life has a specific, designated purpose, but the end goal should never be forgotten. Goswami Tulsidas kindly shares the perspective of the enlightened.

You’re travelling to a foreign destination. You’ve been there several times before, within the same year in fact. You’re aware of the rules beforehand. Don’t drink water from the tap. Eat only cooked foods for the first few days. You haven’t had problems before, so this time you’re not worried. Only on this trip things take a bad turn. You’re not really sure what happened, but now there is this horrible pain in your stomach. You can’t throw up and it’s not like you’re running to the bathroom; the pain is steady.

You take an anti-anxiety pill and that helps you sleep through the night. No more pain. But when you wake up, the problems return. The cycle repeats for a few days. Prescriptions there are many. Some people say to lay off solid foods. Others tell you that it will get better very soon; no need to worry. Then you read that one of the side effects of the anti-anxiety medication is nausea, which is what you feel after waking up, when the effect of the pill has worn off.

The prescriptions given to you in this situation don’t match what is advised for healthy people. Each situation is different, after all. If you’re having stomach problems, you’re supposed to take it easy. But if you’re feeling weak, you’re supposed to eat more. If you have a fever, you should starve it. If you have a cold, feed it. In this way there are so many rules, each with a different objective in mind.

Spiritual life seems similar. Follow this thing and that. In bhakti-yoga, the primary recommendation is the chanting of the holy names. Take your mantra of choice and repeat it a set number of times each day. Just keep saying, “Hare Krishna Hare Krishna, Krishna Krishna, Hare Hare, Hare Rama Hare Rama, Rama Rama, Hare Hare,” over and over again. In the meantime, stay away from four dangerous behaviors: meat eating, gambling, intoxication and illicit sex.

There are so many other regulations, as well. One who follows sees changes gradually, over time. Pretty soon there is less stress. There is enhanced ability in dealing with difficulty. There is universal affection. No more is love reserved for only those who reciprocate. No more is compassion limited to just the human species. Austerity, cleanliness, compassion and honesty are the ideal characteristics of a religious person.

Tulsidas says there is further room ahead. The goal of regulative principles, sadhana, is to make the mind a temple that houses the Supreme Lord. For Tulsidas, the worshipable deity of choice is Shri Rama. He is God the person, appearing on earth in the family of kings descending from the sun-god, the Surya-vamsha. Rama defends the innocent, taking care of His citizens. The whole world is under His protection, but those who forget this and take matters into their own hands run a great risk. Rama protects His devotees, and that protection defends against the aggression coming from the non-devotees.

Rama defends with His bow and arrow. This vision is extremely beautiful. It is known as saguna, since it has features distinguishable to the human eye. It is still nirguna, or without material qualities. This is because Rama’s arrow can take the form of sound. His name itself penetrates the heart and purifies it. His bow carries an endless supply of such arrows, ready to reach the targets that are the pious souls seeking to fulfill the destiny of the human birth. 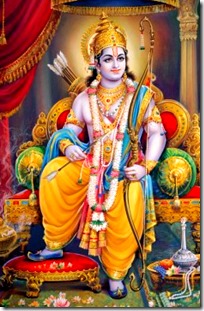 Without welcoming the Supreme Lord in the mind and worshiping, the sadhana isn’t complete. This truth presented by Tulsidas supports the idea of deity worship. If you’re going to worship God, why not make a replica form to look at and honor each day? Not that the Supreme Lord only resides in that particular statue, but the process helps to reach the goal of creating the mind’s temple. Rama can also appear as Shri Krishna, holding a flute in His two hands. He can appear as Vishnu, with four hands. The idea is to worship God the person, not God the abstract. Keep Him in your mind for the mature fruit of sadhana to find.

Welcoming in temple of the mind,
For full fruit of sadhana to find.

Rama with arrows and bow,
Truth the wise saints know.

Not that for regulations only meant,
And in this and that austerity spent.

Further to go, towards ultimate end,
Bhagavan interests of devotees to defend.