Is Life Meant For Suffering

Friend1: Have you been watching any of the hurricane coverage on television?

Friend2: Some of it. I don’t want to, but other people keep it on and it’s difficult to avoid.

Friend1: You probably get this question a lot. How does the spiritually-aware person behave during such events?

Friend2: What do you mean? Are they supposed to behave any different? Bhakti-yoga, devotional service, is a full-time occupation. Night and day, asleep or awake, working or relaxing – there is a connection to the Divine consciousness. In the Ramacharitamanasa, Maharishi Valmiki says that a devotee of Shri Rama doesn’t mind being in heaven or hell, because wherever they are they see the Lord standing in all His glory, holding His bow and arrow, ready to offer protection. This is also one of the reasons for the Divine descents to the mortal world, which can never touch Him.

“In order to deliver the pious and to annihilate the miscreants, as well as to reestablish the principles of religion, I advent Myself millennium after millennium.” (Lord Krishna, Bhagavad-gita, 4.8)

Friend1: Sorry, I should have been more clear. How does such a person behave towards others? Should they lecture about what is going on? Should they be compassionate? Obviously, the root cause is karma. These events don’t happen randomly. There is a cause for everything. 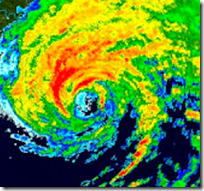 Friend2: To immediately bring up the karma angle is a little insensitive, if you ask me. Just offer your sympathies. Wish well for everyone involved. That’s how the saintly person would behave in any situation, regardless.

Friend1: Okay, but what if someone asks you why these things happen? Should you tell the truth?

Friend2: Of course. That is the most wonderful opportunity, to enlighten someone on the difference between spirit and matter and how in the material world there is one misery after another. Duhkhalayam ashashvatam. This is mentioned in the Bhagavad-gita. The two significant traits of the material world are misery at every corner and temporary duration of existence.

Friend1: Alright, I’m glad you mentioned that. Let’s focus on the misery part.

Friend1: Some people speculate that life is meant for suffering. In that case misery would be a good thing.

Friend1: But then why is there misery in a material existence?

Friend2: To show the proper way. My hand burns when I make contact with fire. This teaches me not to touch fire. Similarly, there is misery when focused only on the body. That should teach me to go towards spiritual life instead.

Friend1: These people will say that spiritual life is about suffering. Events such as these win a person the kingdom of God.

Friend2: You mean enduring them?

Friend1: Right. Suffering and not complaining. Don’t enjoy so much.

Friend2: This speculation comes close to the truth, but not quite there. Human life is about tapasya. This is austerity. Live a regulated life. Don’t go off the deep end. Every person understands this to some degree. That’s why the weight loss business is huge. Gamblers and drinkers can become addicted. Too much indulgence is bad for you.

Friend1: Okay, but why tapasya? Isn’t that suffering?

Friend2: It’s voluntarily accepted temporary hardships. It has to be done in an authorized way, though. You can’t just go on a hunger strike in order to get a raise at work. That’s material and carries the same defects. Tapasya for pleasing the higher authorities, as outlined by Shri Krishna, wins their favor. On a higher level, tapasya for pleasing the Supreme Lord Himself is bhakti.

Friend1: There is suffering involved, though. You can’t deny that. 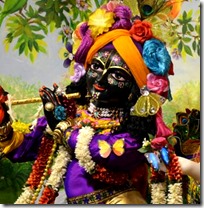 Friend2: In the beginning, perhaps. It’s uncomfortable for sure. The person training for a marathon suffers so much in running a single mile. After a while, the same training is easier. Bhakti-yoga is like that. The austerity is a nuisance in the beginning, but with less reliance on material life there is more bliss found in spiritual life. Think about this for a second. Chanting the maha-mantra is a kind of austerity. It requires time, energy, and focus. People who have matured in the process, having put in thousands of hours, take so much joy that they continue to chant. They don’t consider the routine to be suffering at all. In fact, no amount of money will get them to stop saying and hearing the holy names, which are so dear to them: Hare Krishna Hare Krishna, Krishna Krishna, Hare Hare, Hare Rama Hare Rama, Rama Rama, Hare Hare.

When names by thousands to repeat.

Since with bhakti aim effective,

Not suffering just of any kind,

Where hoping for heaven to find.

Like Loading...
‹ Five Reasons Even Narasimha Was Not A Wrathful Deity
How Does Bhagavan Deal With The Mother-In-Law Problem ›