“I am faithfully engaged in the service of Rama, who is a lion among men [nrisimham], has a broad chest and powerful arms, who treads the earth like a lion and who is like a lion in prowess.” (Sita Devi speaking to Ravana, Valmiki Ramayana, Aranya Kand, 47.35)

Life giving you trouble lately? The pack mentality striking against you, when deep down you know they are wrong? Need some courage in dealing with belligerent people, who can be found in the oddest of places, like the doctor’s office, the supermarket, or even the car dealership? Let the occasion of Rama Navami lift you up.

As since time immemorial the downtrodden, the distressed, and the helpless have put their faith in God, so the Vedas describe Him in many ways that point to His amazing strength. Since His transcendental attributes, gunas, are beyond comprehension, comparisons are used to objects with which we are familiar. This is for our understanding only, as even the objects in nature have limitations.

As one example, Bhagavan is compared to the sun. He is more than just God, which is a generic term that can have many definitions based on the angle of vision. It is a concept up for debate and interpretation, whereas the Sanskrit word Bhagavan has a more specific definition.

Being like the sun, Bhagavan has tremendous potency. He distributes His energy everywhere, and in one sense He doesn’t play favorites. The sunshine won’t alter its course based on the disposition of the recipients. The sun doesn’t take into account how many previous days of sunshine there were. It simply goes to where it is targeted. There isn’t much intelligence to the distribution of energy; only in its original constitution, regularity and predictability in function.

The sun is not known to speak or hear, and so Bhagavan is more than the sun. He can actually move to anywhere He likes and take on enemy combatants. The enemies here are identified with respect to hindering the spiritual practices of the saintly class. Bhagavan not only defends, but He does so fearlessly.

It is in this regard that many times the comparison is made to the lion. Known as the king of the jungle, the lion wins contests simply from its sound. The roar of the lion can scare away the much larger elephant, and the lion is not known to be timid or afraid.

The avatara of Shri Rama accepts anyone who surrenders to Him, be they a man, woman, child, former enemy, or even non-human living entity. Rama accepts and He subsequently defends. He protects the devotion of the devotees, bringing to them what they lack and preserving what they have. Rama Navami celebrates the day He appeared in this world.

When there is trouble, when there is a struggle that requires fortitude and perseverance, Shri Rama can be remembered. The Ramayana is the Sanskrit work that best describes His features and His time on earth, and in those verses composed by Maharishi Valmiki are found several references to Rama being lion-like.

She was very beautiful, and everyone around the world wanted to win her hand in marriage at the bow contest that Janaka held. Only Rama was worthy, and so only He exhibited the necessary strength and skill to lift and string the bow.

The king of Lanka was there at that event, having failed to win. This did not stop him from trying again, after Sita was already married to Rama. He visited her in disguise, while she was living in a hermitage in the Dandaka forest. 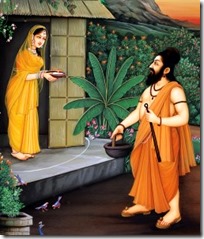 The ten-headed one, the leader of the Rakshasas in Lanka, Ravana assumed the guise of a mendicant. He knew that Sita and Rama are naturally affectionate to the saintly class. Sita was hospitable at first, but Ravana eventually revealed his true form and his real intentions. Ravana had created a diversion that took Rama and His younger brother Lakshmana temporarily away from the group’s home.

Ravana made advances, but Sita rejected them. She boldly declared that she was following Rama as a vow, anuvrata, whom she described to be lion-like. Ravana should have taken the warning, for that lion would not tolerate any harm befalling His dedicated and faithful wife.

2. When Ravana tried again in Lanka

The fiend was too consumed by lust to listen to anything that went against his desire. Ravana took Sita by force onto an aerial car and headed back for Lanka. Separated from her husband, Sita continued in her devotion. Physical association is not a requirement in bhakti-yoga. The sound of Bhagavan is as good as His presence. Remembering Him, smaranam, is enough to bring the strength necessary to persevere through even the worst conditions.

“O vile one, you entered that ashrama only when those two brothers, lions among men, were absent from having gone out to the forest. Only then did you take me away.” (Sita Devi speaking to Ravana, Valmiki Ramayana, Sundara Kand, 21.30-31)

And bad they were for the princess of Videha. Ravana again tried his advances, but they didn’t work. He tried to show off about his strength and accomplishments. Sita kindly reminded him of how he had acted cowardly in the forest of Dandaka. Ravana didn’t fight for her fairly. Ravana waited until the lion-like brothers were away before striking.

As Bhagavan is courageous, so those devoted to Him are fearless in their service. In addition to Sita, another example is Shri Hanuman. He bravely travelled to Lanka, by himself, without any directional guidance. There were no GPS devices or smartphones for communication. At the last phase of the mission given to Hanuman by Rama, the messenger had to go it alone.

“Hearing of the well-being of those two lion-like men, that divine lady felt a thrill of joy in every limb and she spoke to Hanuman as follows:” (Valmiki Ramayana, Sundara Kand, 34.5)

After a lengthy battle with time and false positives, Hanuman eventually found Sita. He gave her the news about Rama and Lakshmana, that they were working hard to find and rescue her. The brothers were again described as lion-like, which they would prove again later by defeating Ravana in battle and removing the burden of sorrow from Sita. 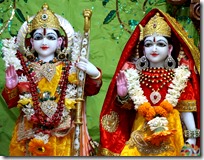 Rama’s representatives display the same courage in boldly declaring the supremacy of God and devotion to Him over the futility of material pursuits. They meet so much opposition but remain undeterred. They get their courage from the lion-like one Himself, and so they have no fear when chanting the holy names and encouraging others to do the same: Hare Krishna Hare Krishna, Krishna Krishna, Hare Hare, Hare Rama Hare Rama, Rama Rama, Hare Hare.

Shri Rama lion-like is He,

From battle in Lanka to see.

To Ravana brash and bold.

Who her affection tried to win,

But no effect from life of sin.

To devotees on that trait passing,

Like Loading...
‹ The Threefold Miseries Of Life And Corresponding Examples
Three Amazing Things God Does With Respect To The Universe ›